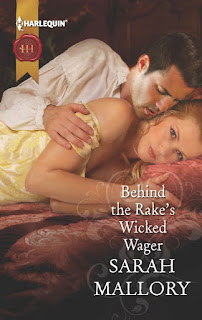 The lovely summer weather encourages one to be lazy, so here is a little light reading for a hot summer's day (or, if the weather turns quickly, to read with a steaming cup of something relaxing).

This is an extract from my latest book, Behind the Rake's Wicked Wager.  Jasper, Viscount Markham, is used to getting his own way, but beautiful Susannah Prentess proves obstinately elusive. He therefore has to turn on all the charm to make her agree merely to join him for supper during one of her aunt's famous Bath card parties.

…As soon as he pulled her hand onto his arm she began to have doubts about the wisdom of being alone with him.
'Perhaps we should ask Mrs Logan and Mr Camerton if they would like to join us…'
'I have already ascertained that they would not.' Something of her disappointment must have shown in her face for he smiled. 'I vow, ma'am, I begin to think you are afraid of being alone with me.'
'Nonsense. Why should that be?'
'My reputation, perhaps?'
'I know nothing of your reputation, Lord Markham. Is it so very bad?'
'Perfectly dreadful,' he replied cheerfully. 'At least it is in London. I am relieved that no one here knows of it.'
She stopped as a sudden worry assailed her.
'And just what is your reputation for, my lord, gambling?'
'No. Breaking hearts.' Again his smiling eyes teased her. He covered her hand with his own and held it on his sleeve. 'Do you wish to run away from me now?'
Susannah's chin went up.
'I do not run away from anything, my lord.'
It was still early and the supper room was empty save for the servants. The viscount guided her to a table at the far end of the room.
Where we will not be overheard.
She stifled the thought. This was her house, her staff were in attendance.  No harm could come to her here. The viscount insisted she sit down and went off to fill a plate for her. Susannah looked at the table, playing with the napkins and the cutlery. She would not watch him: she was all too aware of the graceful power of his movements. She would be better gathering her wits. The viscount had an uncanny knack of disconcerting her, she must be on her guard.
Susannah kept her eyes lowered until he returned and placed before her a plate filled with little delicacies.
'I congratulate you, Lord Markham. I gave you leave to choose for me, and I believe there is nothing here that I do not like.'
He slipped into the seat opposite and picked up his napkin.
'I took the opportunity to ask your estimable butler for his advice.'
She chuckled at that.
'I give you credit for your honesty, at least, sir.'
She applied herself to her food, gradually relaxing. Lord Markham was the perfect companion, asking nothing impertinent, amusing her with little anecdotes. As her nerves settled so her appetite improved and when her plate was empty she looked at the single syllabub glass on the table.
'Is that for you or for me?'
'For you.' He picked up the spoon. 'But I hoped you might let me share the enjoyment.'
She sat back, scandalised.
'No, that is an outrageous idea.'
He glanced around.
'Why? The room is empty at present. Even the servants are not attending.' He scooped out a small spoonful of the syllabub and held it out to her.
Susannah stared at it. She must not. She dare not. Yet she sat forward, her eyes on that tempting spoonful.
'Go on,' he murmured, his voice low and inviting. 'While no one is watching. Tell me how it tastes.'
He held the spoon closer and automatically her lips parted. She took the sweet, succulent mouthful, felt the flavours burst upon her tongue. Nothing had ever tasted so delicious. Heavens, was this how Eve felt when she had tried the forbidden fruit?

Jasper watched, entranced. He saw the flicker of her eyelid, the movement of her throat as she swallowed. She ran her tongue across her lips and he felt the desire slam through him. By God, no wonder Gerald was besotted. He tore his eyes away and sat back. He was meant to be seducing her, not the other way around.
'Well, Miss Prentess, did you enjoy that?'
She would not meet his eyes. That was perhaps as well.  He was not at all sure he could sound so cool if she was looking at him.
'Yes…no.'
'Another spoonful, perhaps?' He dug the spoon into the syllabub again but she lifted her hand.
'No! There are too many people now. We will be seen.'
'But you would like to do it again?'
Her blush gave him the answer but she said hurriedly, 'Of course not. You are quite outrageous, my lord. We will forget that happened, if you please.'
Her voice was perfectly steady but he noted that her hand shook a little as she picked up her napkin and touched her lips. Good. She was off-balance, which had been his object. That he, too, was shaken by the moment was unfortunate, but it would not happen again.
'As you wish. But there is something else I want from you, something that is not at all outrageous.'
'What is that?'
'To play picquet with you.'
'Out of the question. You have already won more than enough from my aunt.'
'I am giving you the chance to win it all back.'
'No.' She rose and shook out her skirts. 'I must return to the drawing room.'
'As you wish.' He held out his arm. The fingers that she laid upon his sleeve trembled a little. He fought down the impulse to put up his free hand and cover them, to protect her. That was not his purpose at all. As they left the room he asked his question again.
'And shall we now play picquet?'
'I have told you, no, my lord.'
He threw her a teasing glance.
'After such a meal do I not deserve some reward?'
The look she gave him was indignant.
'After such a meal you deserve I should not speak to you again!'
Charles Camerton and Mrs Logan were descending the stairs and they waited to let them pass.
'We were just coming down to join you.' Charles addressed them cheerfully. 'Mrs Logan hopes the luck will change after a break.'
Jasper noted the rueful look the widow gave to Susannah as they passed.
'It seems your aunt and your friend are not doing so well this evening,' he commented as they went up the stairs.
'We shall come about.'
'You could recoup everything with a single game of picquet.'
'Or lose even more.'
'Not necessarily.' He had her attention. 'We need not play for money.' He glanced up and down the staircase. They were alone. 'I will wager my diamond pin against….' He paused.
'Yes?'
'Dinner,' he said at last. 'You will join me for dinner at York House on Thursday night.'