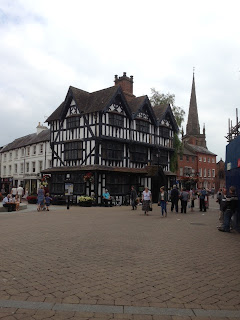 Castles and ruins can provide the perfect inspiration for historical novels and I love reading the posts on this blog about various lovely buildings visited.  But what about lesser houses, those belonging to ordinary people?  Sometimes they can be just as interesting and spark ideas for stories too.

One such is The Old House in Hereford, a beautiful timber-framed building which stands right in the middle of what is now a pedestrian area in the centre of town.  It looks oddly out of place because it is the last remaining house from an old street called Butcher’s Row which no longer exists.  It’s as if someone lifted it up and put it down where it doesn’t belong.  Being so different to its neighbours, however, makes it stand out and every time I pass, I have the urge to go inside.  Often, I do.

The building dates from 1621 and no one knows who the architect was.  It seems to have been built for (or first occupied by) a butcher, as the arms of the Butcher’s Guild are carved on a shield over one of the doors, but other tradesmen have also lived there and it’s been used as a shop of different kinds.  It is now a museum and there are lots of black and white photos depicting the house throughout the 19th century and later which are fascinating to see. 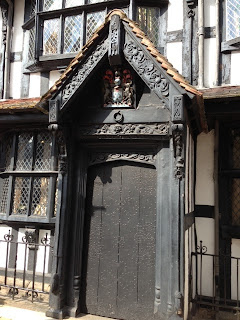 You enter through a lovely porch with carvings all around it and immediately you feel as though you’ve stepped back in time.  You forget about the modern streets around it and the noise and bustle outside fades into the background.  The ground floor of the building consists of two rooms, one very spacious which must have been used as the shop, and another which may or may not have been the kitchen.  (The signs said the kitchen could have been in an outhouse instead).  Both these rooms have wonderfully smooth flag stone floors and large fireplaces.  These now display cooking pots and spits for roasting to show visitors how cooking was done in the 17th century, and there was an enormous “bread ark” (a large wooden chest) where dough was kept while rising.

A staircase leads to the first floor, which has two rooms with shiny oak floor boards and a wealth of leaded windows.  The largest was the parlour.  Whoever owned this house must have been fairly well off as they don’t seem to have stinted either on windows or fireplaces (there are another two on this floor, one with a very ornately carved surround).  The ceiling is also beautifully decorated with what looks like plaster fleur-de-lis.  And there are wall paintings, painted straight onto the plaster walls, with all kinds of motifs – some biblical, some classical.  I had no trouble at all picturing one of my heroines sitting in the parlour in front of a roaring fire, with her needlework on her lap and perhaps a small dog by her feet.  Could she be an heiress, the rich daughter of a tradesman, her wealth needed by some impoverished local lord?  I could just see him come here to court her, probably reluctantly, but maybe he would feel differently once he set eyes on her? 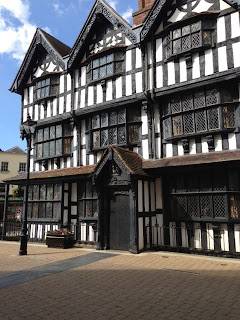 Another staircase leads from the smaller room to the second floor, which contains the bedrooms.  I loved seeing the tiny tester (four-poster) bed, which would have been cozy to say the least!  (Anyone larger than me – I’m five foot three – would have struggled to fit into it, but the hangings must have provided some much needed privacy.  And there is another bed which shows how they were constructed, with a wooden frame strung with rope on which the lumpy mattress rested.  I couldn’t help but wonder how uncomfortable this must have been, especially when shared with several other people!

If any of you find yourselves in or near Hereford, I can definitely recommend a visit.  Whether you’re in need of inspiration for a story or just want to see a wonderful old building, The Old House is great!

What a fabulous building, Christina. I love those old timber-framed houses - they always have such wonderful atmospheres.

It looks like a dolls house, Christina, quite fascinating and so wonderful that it has survived.

I really enjoying looking around old buildings, and this one is now on my list to be visited. Thank you!

Thanks Elizabeth and Sarah - yes, it's a fascinating house and unusually big for the time I think. Normally in 17th century buildings I feel cramped, but not in this one! Its many windows made it feel light and airy too.

I was at bording school in Hereford in the early 60s and the Old House was very much part of the #heritage fabric# of the city even then (although nobody talked about "heritage"
There was another similar but smaller terraced house in the area they removed, repaired and replaced during my time there.
I must go back for a look soon.
John

Christina - it so happens that I'll be in Hereford in August, so I'll put this house on my list of "Things to See" ;-)

John - I'm not sure where that other house could be, but I hope it's still there. Will check! I love it when old houses are preserved.