The Portland Vase and a Victorian Vandal 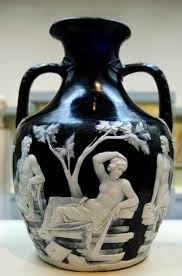 On the 7th February 1845 William Mulcahy, a drunken visitor to the British Museum, smashed the famous Portland Vase.

The Portland Vase had had a long and colourful history. It is piece of Roman cameo glass that served as a major inspiration to glass and porcelain makers from the Georgian period onwards. Made of violet blue glass, it has two pieces of cameo glass depicting different scenes from mythology. It is thought to have been made between AD 1 and AD 25.

Sir William Hamilton, British ambassador in Naples, purchased the vase in about 1778. he brought it to England and sold it to the Dowager Duchess of Portland. Her son, the 3rd Duke, loaned the vase to Josiah Wedgwood, who tried to make a copy of it. It took Wedgwood years to come up with a version he was happy with and when he displayed it at a private view the event was limited to 1900 tickets and sold out. The tickets read: “Admission to see Mr Wedgwood’s copy of the Portland Vase, Greek Street, Soho, between 12 o’clock and 5.  He later displayed the vase at his London showrooms. It must have been amazing to see the crowds gather to view a beautiful replica of the original.

The original vase was passed to the British Museum for safekeeping but in 1845 William Mulcahy, who had 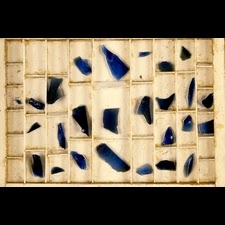 been drinking for the entire preceding week, picked up a nearby sculpture and threw it on top of the glass case containing the Portland Vase, smashing both into small pieces (pictured). He was arrested and fined £3 for wilful damage but was obliged to spend time in prison as he could not afford to pay the fine. An attempt was made to restore the vase but when it was complete there were still 38 pieces spare! The final reconstruction was done in 1988 and the vase returned to display. As for Mulcahy, who had dropped out of studying at Trinity College Dublin, I couldn’t discover what happened to him and I wonder if he became an upstanding member of the community or if the drink ruined him! Whatever happened, he will always be known as the “intemperate vandal” to quote the police report of the time, who wilfully smashed the Portland Vase.
Posted by Nicola Cornick at 10:02 AM

Thank you for this, Nicola. I enjoyed reading about the Portland vase's eventful history; it's a piece I've always admired. I do hope that when it had its final restoration in the 1980s they managed to incorporate the 'extra' 38 pieces!

Thanks, Elizabeth! It is such a beautiful piece, isn't it, and it has had such an eventful time!