My recent book for Harlequin Historical – AT THE HIGHWAYMAN'S PLEASURE,  had the working title The Actress and the Highwayman, for obvious reasons! When I was researching for it, I read about the real life actresses of the eighteenth century, and what fascinating characters I discovered.  They were the mega stars of their day.

Anne Oldfield, for example (1683 – 1730). She was a soldier's daughter who started work as a seamstress's apprentice, but one day when she was reciting some lines from a play (as you do!) the  dramatist George Farquhar overheard her and she was taken on as an actress as Drury Lane.

It was not overnight stardom, though, it was ten years later when she was acclaimed as the best actress of her day. By the time she died she had amassed a considerable fortune, some of it from a gentleman who left half his fortune to her and their son (born out of wedlock). She had another natural son by Lieutenant General Charles Churchill. She is buried in Westminster Abbey, beneath the monument to Congreve.


Another great actress of her day was Lavinia Fenton. She is thought to be the daughter of a naval officer but took the name of her mother's husband (relationships were just as complicated in the 18th century as they are in today's celebrity world).

It is also thought she was a child prostitute before she became an actress. She made her name as Polly Peachum in the Beggar's Opera.  Portraits of her were in great demand, books were written about her and verses published. In 1728 she ran away with the 3rd Duke of Bolton, who was much older than herself.  They had three sons together and when his wife died in 1751 he married her.  She outlived her husband and died in 1760. 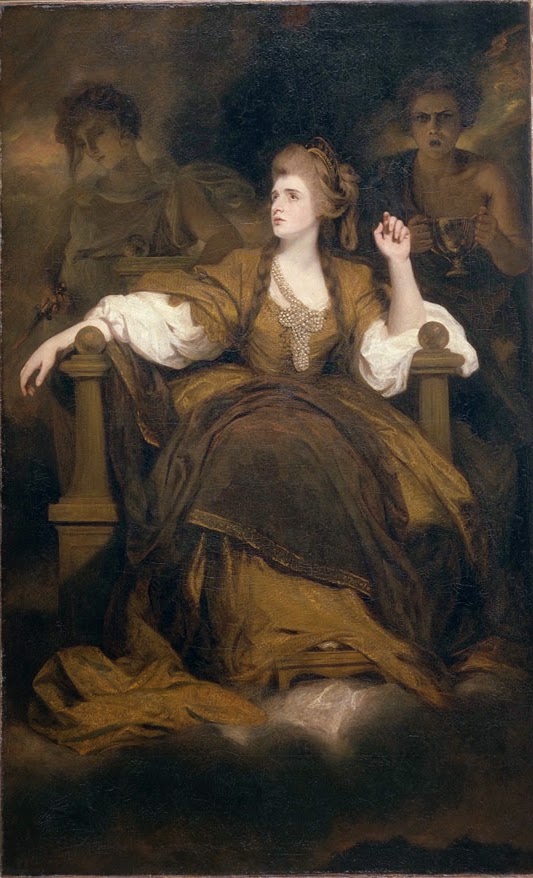 Finally, there is the actress whose name is still well known today – Sarah Siddons. She was born in Wales in 1755 and was famous for her tragic roles. Here she is painted by Reynolds "in tragic pose" as Lady Macbeth.  She came from an acting family, the Kembles, but acting was still not quite "respectable" and her parents did not want her to go on the stage. She began her working life as a lady's maid but acting was in her blood and in 1773 she married an actor, William Siddons. Her first appearance at Drury Lane was not a success and they told her she was no longer required.  In 1777 she went to the provinces and worked  "on the circuit" for the next six years. Then in 1782 she returned to Drury Lane and this time was hugely successful.

She was described as tall and striking with brilliant beauty and expressive eyes. She had a solemn dignity in her tragic roles. In 1802 she went into semi-retirement, appearing occasionally at Covent Garden where she gave a farewell performance in 1812. After that she made a few special appearances, the last in 1819.  Sarah died in 1831, having borne seven children and outliving five of them. She is buried in St Mary's Cemetery at Paddington Green.

My actress, Charity Weston, is not as successful or famous as any of the above, but it was fun to give her some of their characteristics – she is very beautiful, for example, and when she meets the fascinating Ross Durden she needs all her acting skills to bring their story to a successful conclusion.

As Melinda Hammond: the award-winning   DANCE FOR A DIAMOND now available on Amazon.
Posted by Historical Romance Author at 8:31 AM

It seems that to be unrespectable in the 18th century, if you were a woman, could be a positive advantage! It certainly gave you opportunities you might otherwise not have had if you were committed to treading the straight and narrow.

Has that much changed, Elizabeth? Today the media makes celebrities of the notorious.

These three ladies all did well, though.