The weather this year has been extraordinary – no doubt caused by global warming. More flooding, more rain and less frost than previously recorded. Then most of March was extraordinarily warm.  I was married on March 7th 50 years ago and it snowed. This year it was warm and sunny and people wore summer clothes to our party. Last year the weather was mild in February and snowed heavily in March.
I thought I would look in my "Seed Time & Harvest", the diary of an Essex Farmer – William Barnard of Harlowbury by Joyce Jones – to see what the weather was like in April. 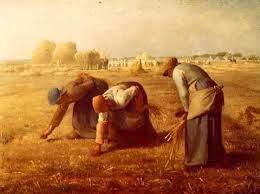 April 13 (1811)
The weather this day very ungenial ...the severe frost have checked vegetation  very much which the previous mild weather had caused to be forwarder than had been known for many years.I should have tried to sow Grassy piece with barley this day had I not been at malt carting; it has now been plowed about a month & having once got dry it was useless to attempt to sow it without rain, but if we do not have more showers I am not sure I can do it next week. I never remember so long a time this season in the year without rain.

So unseasonable and unusual weather can be caused by things other than man-made pollution. April 1811 was obviously unusual. The severe frosts William Barnard mentions in his diary were causing him problems and then the long period of dry weather, also unexpected in April – there wouldn't be the saying "April showers" if the month is not usually wet – prevented him from planting his barley.
The long-range weather forecast for 2014 is for the hottest summer ever – May to August the temperatures are expected to be in the 30s. Is this expected heat wave a product of deforestation and carbon emissions or just part of the world's natural cycle? Even the Americans now believe there is something called "global warming" but I'm not sure they accept this is damaging our world and changing weather patterns.
What do you think?

Posted by Historical Romance Author at 8:29 AM

An interesting post, Fenella. I checked with the wonderful Dorothy Hartley. Her 'The Land of England' takes us through the farming year. She opens her chapter on April with an old phyme:

If April be dripping, then do I not hate,/ (For him that hath little) his fallowing late; / Else otherwise, fallowing timely is best,/ For saving of cattle, of plough, and the rest.

'Fallowing' in this context means to plough and break up the earth ready for sowing. But the rhyme at least indicates that sometimes April could be too wet to work with the plough.

The poem goes on to say: 'Look now to provide ye of meadow for hay,/ if fens be undrowned, there cheapest ye may.' Which again suggests that, some years, the fens were under water.

Sensibly, in earlier times, farmers expected water meadows and fens to be under water some years and were prepared for it.

Elizabeth, we always talk about April showers, don't we? I think we're heading for disaster -the ice caps are melting and in 20 years millions of acres will be under water. I also believe man has done this to our wonderful planet -but was talking to friends and they both think global warming is nothing to do with us.