The Finest Town West of Bath 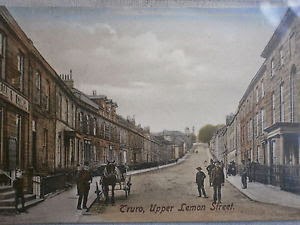 Last weekend we paid a flying visit to Cornwall, staying overnight in Truro. Truro is a beautiful city and I have always enjoyed visiting it but I hadn’t quite realised what a rich history it has. The Norman castle my be long gone but throughout the medieval period Truro flourished as a port, only seeing a decline in trade when the Black Death decimated the population.

By the Tudor period the town had returned to prosperity. It was a Royalist stronghold during the English Civil War, but was taken by Cromwell’s troops in 1646. It was the improvement in mining techniques during the Georgian and Regency period, and the high price paid for tin that turned Truro into a fashionable town. We stayed in Lemon Street, a long road of elegant Georgian townhouses named after the local MP and industrialist William Lemon who organised the development of the Georgian town and built a hotel and a bridge over the river.

It was the influx of rich magnates such as Lemon that turned Truro into “The London of Cornwall,” as one
Regency visitor described it and “the finest town west of Bath.” The Truro Assembly Rooms were built in 1780 and balls were held once a month. The Assembly Rooms could also be used as a theatre and during the 1810 – 1811 season there was a theatre company in residence who put on 80 different plays.

The place to stay for visitors during the period was The Red Lion Hotel, considered to be “by far the best hotel in Cornwall… fitted in a very genteel manner.” The owner advertised it as having “exceedingly good beds, an excellent assortment of wines, three handsome parlours, a billiard room and dining room, a cedar room, many vast lodging rooms and stabling for 30 horses.” One male tourist commented approvingly on both the women and the town planning in one sentence: “The women… are very fair and in general genteel and it is a new paved town with wide and regular streets… There are a number of very capital houses and smaller houses built of stone, which are all neat and good.”

The Mansion House and The Great House were two of “capital houses” in the town. The Mansion House had ornate rococo decoration in the drawing room and stairs that was said to be the work of French prisoners of war. The Great House was fitted with mahogany and marble and it faced the river. Sadly the owner wasn’t happy, complaining that the ships on the river obstructed his view and gave the place “a very grotesque appearance.” I don’t think that I would have complained!

In my brief sightseeing I was fascinated to discover that Truro was the first stop on the “Trafalgar Way,” the route taken by Lieutenant Laponetiere of HMS Pickle to deliver the news of the victory at the Battle of Trafalgar to the Admiralty. He landed at Falmouth on 4th November and raced to London in a post chaise and four, changing horses 21 times along the road. He arrived at the Admiralty 37 hours later. These days it takes 5 hours from London to Truro on the train and it’s well worth the visit! 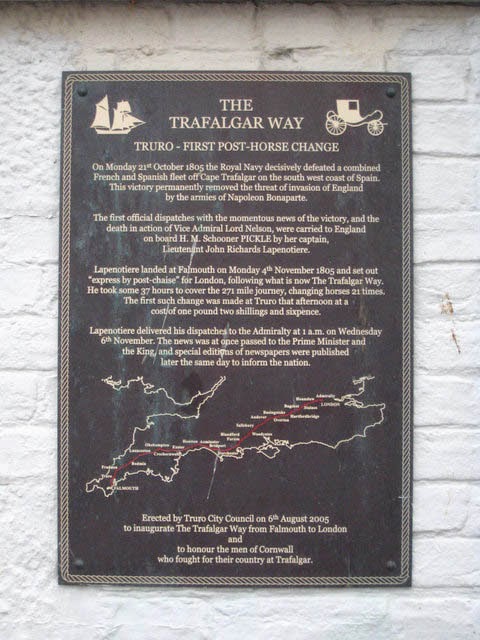 Posted by Nicola Cornick at 9:00 AM

What an interesting post, Nicola, and what an fasinacting history you've unearthed.

I, too, like Truro. I've always admired the elegance of the new cathedral - well, newish (late 19th - early 20th century).It has some good tea rooms, too!

Thank you, Elizabeth. Yes, I agree on the cathedral. It's very beautiful. I'm only sorry I didn't have more time to sample the tea shops!