Writing a series bringing the Roman gods to life in Georgian Britain has given me a few headaches, but on the whole the blend has been perfect. I can’t believe how well it’s going, and last week I was offered a contract for another, so I’m not the only one!
But once I looked into the period and the whole history of classical studies, it was such a good fit, I couldn’t resist. The Georgian era actually saw a huge revival in the study of the ancient civilisations of Greece and Rome, culminating in the rejection of all things Roccocco in France after the Revolution and the Republic claiming the classical culture as its own.
The Classics had never been forgotten, of course. The story of Anthony and Cleopatra, for instance, had been repeated by playwrights. In the Florence of the fifteenth century, the Neoplatonist scholars had been enormously influential on their culture, and that spread to Rome and through Europe.
Probably the first important indication that classicism was returning was the building of St. Pauls’ Cathedral in the classic style, instead of the gothic church it replaced. Important because everybody could see it. It wasn’t a study stuck in a library somewhere, or passed around erudite circles. There it was—an instant landmark. Before that, Inigo Jones had made a mark in the sand with the Banqueting House, but classicism meant something very different then.
For most of the eighteenth century, Palladio’s vision ruled when new buildings were being constructed, especially the grander ones. He designed a gorgeous little villa just outside Rome that everyone aspired to. So the great country house was typically “Palladian.”
The Grand Tour encouraged young men of good family to travel abroad to further their education. Many went on a spending spree, and bought busts, and statues of varying quality and authenticity to send home. Some engaged in more scholarly pursuits (and some didn’t, but that’s an entirely different story!) And then, in the 1750’s, they discovered Pompeii.
What the first explorers did is enough to make a modern archaeologist spit blood. They were essentially treasure hunters. They stripped the paintings from the walls, took the artefacts and didn’t record where they found them, and didn’t fully explore an area before they went on to the next one. Karl Weber and Francesco la Vega both made extensive studies, with drawings, which they published. Information was disseminated, and the classic designs of Palladio were replaced by the “purer” vision of the Adam brothers. Plus the colours. Previously, classic statues and remains had been stripped of the colour that the ancient Romans and Greeks had put on them. People were used to marble statues with blank eyes, which were often copies of bronze originals. Bronze, being an expensive commodity, was often melted down and reused, while the marble copies were more permanent, if of lesser quality. And white. So white.
Pompeii revealed the vivid colours the ancients often used, the terracottas, blues and blacks, and it came as a distinct shock to the eighteenth century scholar. But not to the designers, particularly Robert Adam, who leaped on them and used them to great effect in places like Osterley Park in London.
Is it any surprise that when I put my gods and goddesses into London ballrooms, they felt completely at home? 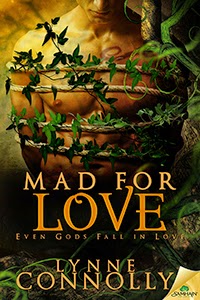 “Mad for Love,” the story of Bacchus and his Ariadne, is available for pre-order now, and will be released on November 18th from Samhain and all major ebook outlets. Print will follow.Here's the Amazon link.

Posted by lynneconnolly at 4:04 PM

An interesting post, Lynne. As you say, the Grand Tour was a feature of a gentleman's education and of course those gorgeous high-waisted gowns were based on Grecian fashions.

I've always loved the vivid colours the Romans used in their houses. In the music room in Spencer House in London, there are some wonderful engravings hand-coloured in gouache dating from the 1770s of wall paintings discovered in Nero's Golden House in Rome.

The colours are astonishingly bright. We tend think of Pompeian red as a sort of terracotta but it was probably much nearer deep scarlet. The Golden House must have looked spectacular. Oh, to time travel!

It sounds like a perfect combination, Lynne - can't wait to read these!