With the imminent publication of Brides of Waterloo trilogy, Louise Allen, Annie Burrows and I will be blogging on aspects of the battle and our books over the next few months.  I am sure there will be lots of posts about the British army, but I thought I would redress the balance a little bit and talk about one aspect of the Napoleonic Wars where the French had the advantage. They invented and developed the ambulance.

When I first saw the term "flying ambulance" I thought it was something that had originated in Africa, or in the Australian outback. In fact it goes back much further than that.  It was Annie Burrows who first brought it to my attention, when we were planning our trilogy of stories. The Brides of Waterloo features a British artillery troop nicknamed Randall's Rogues and when Annie needed to get her wounded hero from the battlefield she calmly announced, "the French have ambulances, so the Rogues will steal one."

An intriguing idea, and I read more about the development of the ambulance in Dr Martin Howard's two wonderfully detailed books, Wellington's Doctors and Napoleon's Doctors.

For his day, Bonaparte was very forward-thinking when it came to the health of his army. He preferred prevention to medication and advocated good food, good hygiene, fresh air and high morale. He also supported the use of quinine and vaccination. He was known to support his surgeons and doctors and yet he was also capable of callously sacrificing huge numbers of men on ill-thought-out military schemes. He aroused mixed feelings in his medical staff, including those in civilian life as the years of the Empire drew to a close and the casualties in the French army rose to alarming proportions.

Weapons of war changed very little during the 18th century.  The effectiveness of the lead musket balls varied widely, a bullet could kill or it might inflict only a superficial wound that could cause little immediate pain and there are reports of soldiers digging out the balls themselves.  Howard tells of a French volunteer in 1792 who was shot in the hip. He dug out the ball and re-used it, shouting "look, this is how republicans fight!"

Soldiers facing cannon had perhaps more to fear. A soldier in the path of round shot was often killed outright, or had major injuries that required amputation because bones and tissues were so badly damaged. Then there were the sword wounds. Straight swords were used for thrusting and caused deep internal injuries, usually to the chest and abdomen, whereas a curved sabre was used for slashing at the head and arms. The heavy cavalry wielded a broad sword capable of breaking bones and severing limbs. And it was not only weapons -  there was the risk of being crushed by falling masonry or trampled by horses, or burned by exploding shells and fires in the undergrowth or buildings.

And if none of the above actually killed you, for survivors there was the risk of disease.

Normal practice in the 18th century was to leave the wounded on the battlefield until the end of the battle then send out litter-bearers to carry anyone still alive to field hospitals situated a mile or so from the site, where the doctors would remain safely away from the battle. Many of the wounded died before they could get to help or were never even moved from the field as many of the litter-bearers preferred to become looters and never carried their injured comrades to the hospitals.

However the Revolution had brought the welfare of the rank and file to prominence and by 1793  the French Revolutionary Authorities were ordering army doctors to remain with their men in battle or risk a charge of desertion. Many medical men were dedicated and courageous doctors and  happy to comply, and two of the most prominent of these were Pierre-Francois Percy and Dominique Jean Larrey. They were both surgeons in chief to Napoleon, and with the support of many of their colleagues they pioneered the idea of taking medical help to the wounded men.

By 1772 the French were already using heavy wagons drawn by as many as 50 horses to carry medical supplies. These were large "ambulance hospitals" with hundreds of medical personnel to cater for up to 2,000 injured soldiers but they were slow and cumbersome.  In 1793 the National Convention even set up a competition to design a carriage suitable for transporting the sick and wounded. None of the designs proved a success, but it demonstrates that the provision of medical help was a concern. However, the doctors themselves were making more progress.

In 1792 Percy was the surgeon in charge of the Army of the Rhine and he formed a number of old soldiers and disabled men into a corps of stretcher bearers. The men worked in pairs to remove the wounded from the field and take them to the nearest mobile hospitable. Then, when all the wounded had been collected the corps assisted the surgeons in the hospitals.   Percy also designed an elongated vehicle with four wheels that was filled with surgical instruments, dressing, elastic sticking plasters etc. These vehicles were called "wursts", the German for sausage, because that is what they resembled. The top was rounded, covered in leather and provided saddle-like seating for up to ten surgeons and their assistants to sit astride. They had supplies enough to deal with upwards of a 1,000 casualties.  However, the vehicles were large and cumbersome and the lack of logistical support and a shortage of horses and supplies hampered their effectiveness.

These "wursts" were praised by officers but never in widespread use on the battlefield. However, Larrey designed a smaller, lighter but sturdy vehicle that was able to travel quickly over the ground. It could bring medical aid to men during the fighting and could carry away two patients lying down. His idea was to remove the wounded from the battlefield with all speed, so the surgeons accompanying these vehicles carried only the equipment required for first aid, and the more seriously wounded would then be removed to mobile hospitals close by. Larrey was supported by the medical men of the day and in 1797 he received official approval for his idea, which by this time included not just the light vehicles, but a whole medical organisation dedicated to treating the wounded and removing them from the battlefield as quickly as possible. The smaller, light vehicles also had the advantage that if one of them was lost it would not be a major blow as there were others to carry on the work. 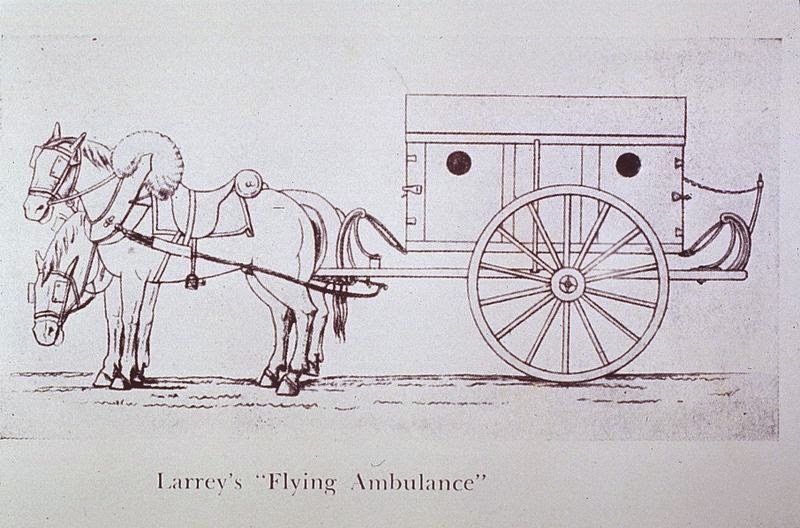 These "flying ambulances" were a full complement of 340 men and over 30 wagons split into three divisions with surgeons, assistants, orderlies etc. each man with specific duties and his own role to play. Great attention was given to the medical equipment carried and the uniforms, everything had to be practical and useful. In 1798 Larrey also had the opportunity try out his ambulance system in Egypt– and when there was a shortage of draught animals he used camels to transport the wounded!

British doctors could only look on with envy at this advanced system of medical care. Today it seems a very logical idea, but it took another 60 years after Waterloo for the British to set up their trained ambulance corps. 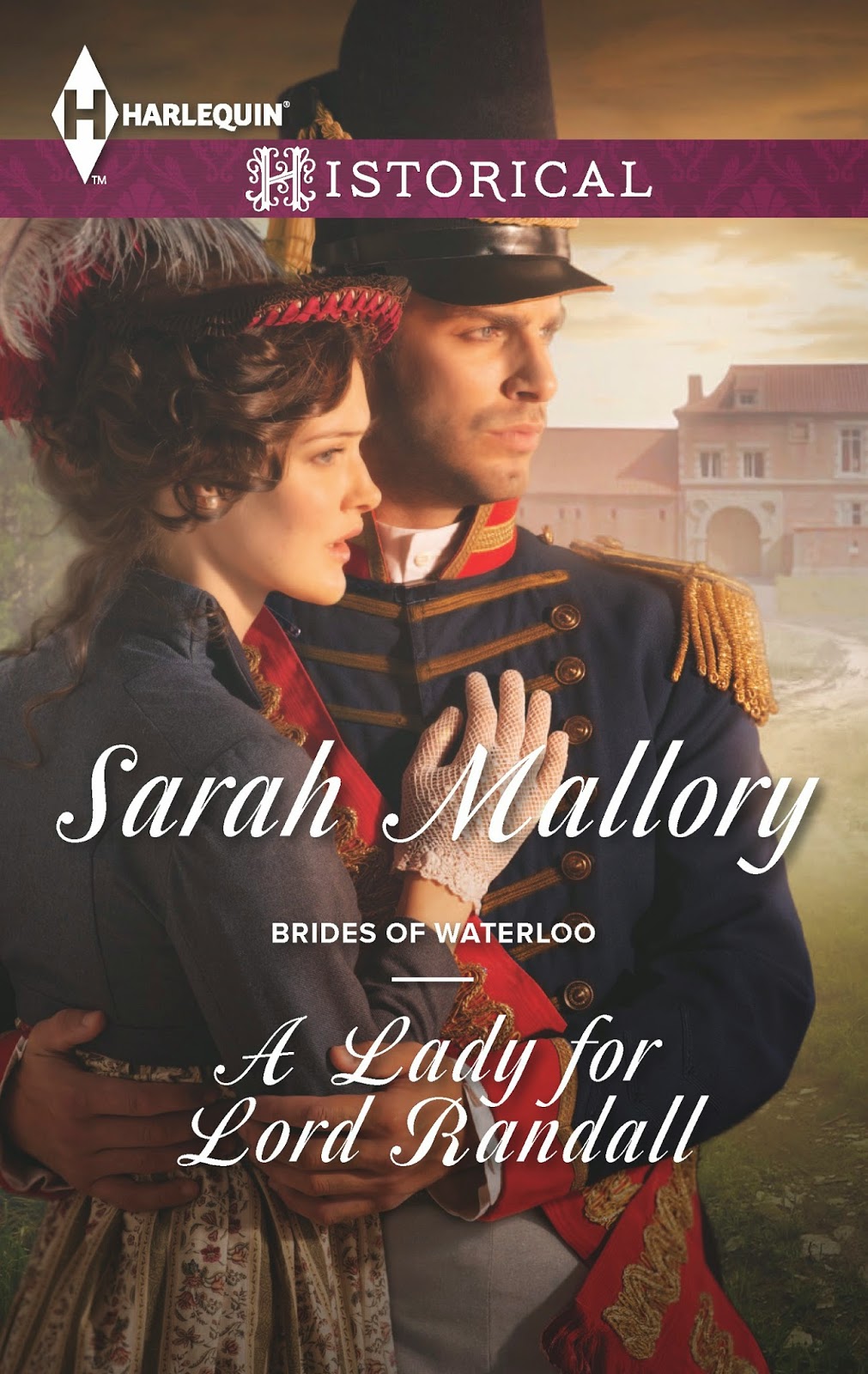 And as a final footnote, Larrey had another innovative idea - he  wanted hospitals to be inviolable during war. This concept was much later taken up by the Red Cross and the Geneva Convention.

Published by Harlequin May 2015 -
A Lady for Lord Randall,
first in the
Brides of Waterloo Trilogy

Posted by Melinda Hammond/Sarah Mallory at 3:00 AM

This is exactly the sort of post I enjoy, Melinda/Sarah. It's well-written, interesting and informative.

I knew that the care of the wounded was rudimentary in the extreme in Wellington's army during the Peninsular War, but I didn't know that the French were much more advanced.

Thank you for this. I shall take note!

Thanks, Elizabeth, glad you enjoyed it. I think it was the mind-set of the people at the top that made the difference, the will was there to try to do something about the casualties, although no one was very sure what to do until Larrey and his chums came up with an answer. It seems to logical to us, today, but it was revolutionary at the time. I also suspect that its impact was patchy, where Napoleon's favourites, the Imperial Guard were involved, the system was set up and worked well. Other places I am sure did not see much benefit as wagons would be commandeered for "more important work" by those in command.

A really fascinating article. I had no idea that there were ambulances then, or that such attention was paid to the wounded by the French. It is strange that the English were so slow to adopt anything similar.

Is there any information on survival rates? Presumably someone demonstrated that more soldiers given medical treatment quickly survived than those who had to wait until after the battle, in order to persuade those making decisions to invest in doctors and ambulances etc..

I have no reliable evidence of how survival rates, Helena. My impression is that the elite units like the Imperial Guard gained the most benefit, but even at Waterloo, when the number of medical officers employed had doubled (since 1800), most of the French troops would have received little help from the under-resourced ambulance service. It was a great idea, but still in its infancy.

Really interesting. Thanks so much for posting this. I have Wellington's Doctors but not yet Napoleon's. Another book I need to acquire.

Re survival rates, I seems to recall there are some figures in Wellington's Doctors in the appendices at the back. I imagine there will be figures in Dr Howard's Napoleon book too

Thanks for dropping by, Joanna. Unfortunately I couldnt' find anything to compare regarding survival rates, Joanna. There is an Appendix at the back of the Napoleon book showing the fate of a small group of soldiers from Napoelon's Army but it does not include soldiers from the Guard, and since it appears that the ambulances were most effective in the Guard units I doubt if one could draw many conclusions from it. However, it is a fascinating subject and no doubt someone, somewhere had information.... thanks to everyone for dropping by.

Viagra (otherwise called Weiergang) is the world's first ED treatment drug created by Pfizer in the United States, which significantly affects the treatment of erectile brokenness. The medication acts unequivocally on the penis, helps the corpus cavernosum vascular smooth muscle unwind, expands blood stream, builds the blood substance of the enormous body, and accomplishes a solid and dependable impact of aiding the penis erection, in this manner creating a remedial impact on penile erectile brokenness. Viagra has results, regardless of whether the results are not self-evident and the mischief is little, there are still a few. Also, Weier Steel is a professionally prescribed medication in Taiwan. It is hard to purchase without a specialist's remedy. Thusly, don't confide in any business promotions that have no results by any means. You ought to go to the authority store site to purchase and be careful with being misdirected.

Would you like to attempt another remedial way to deal with assuage your joint or muscle torment ? Contact your osteopath in Paris ! This technique for care depends on exact controls of the body and has effectively demonstrated powerful in the treatment of numerous actual problems.