The Importance of Sons: a Trip Round my Victorian Screen

I have a nineteenth century screen in my sitting-room. It comprises four hinged panels: one side of the screen has a scarlet background,  and the other has a black one. It was a popular pastime for ladies to buy cut-out and varnished pictures to paste onto the screen, or perhaps into a scrap book, and create their own customized art-work.


Mine – dating it by costume – is roughly 1870s, and the young lady (for I’m sure it was a young lady) who once owned my screen chose to paste pictures which unwittingly demonstrates how rigid gender roles were at the time. Many of her pictures emphasize the importance of sons; daughters are there only in admiring roles. I found myself wondering if this reflected her own life. 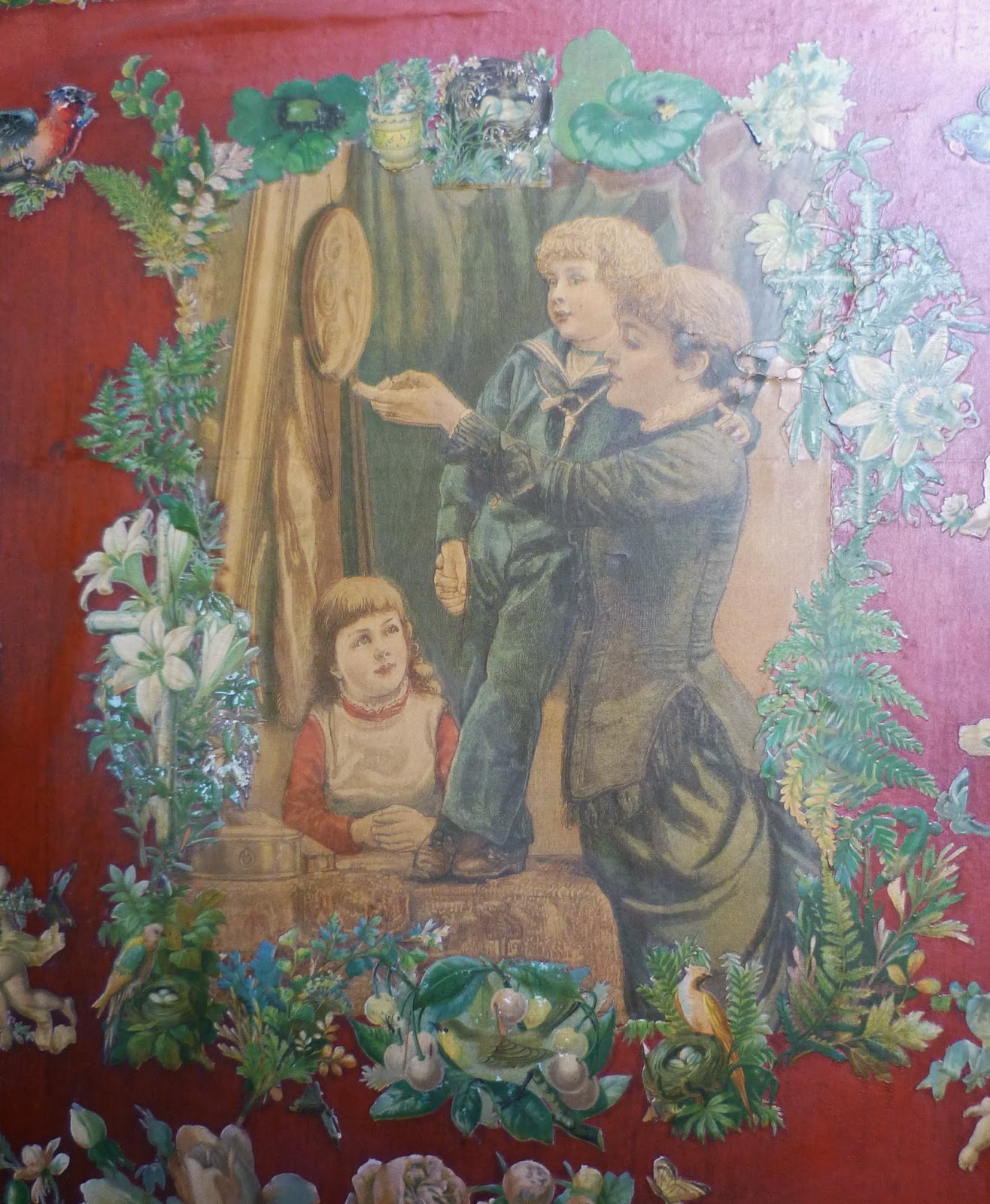 
The picture above shows a small boy standing on his mother’s dressing-table, holding her hand. One foot is negligently crossed over the other and he is looking, with some complacency it must be said, at his reflection. He wears a sailor suit with long trousers, known as a Man-of-War suit, and his hair is cut short.


According to the Cunningtons’ Handbook of English Costume in the 19th Century, ‘Small boys between 3 and 6 years of age might wear tunics with white frilled drawers showing beneath them.’ And a number of fond mamas refused to cut a baby son’s hair – Elizabeth Barrett Browning among them. Her poor son, Pen, was forced to keep his hair long until his mother’s death, when he was twelve.


The boy in the picture has, fortunately, been spared the indignity of long curls and he obviously feels the importance of his new status: a sailor suit with long trousers (and a suitably manly name) and his baby curls cut off. His older sister stands by the dressing table looking wistfully up at him. No sailor costume for her. 
This picture depicts a nurse showing the new baby – obviously a boy – to his five sisters. There is no need for a caption; the importance of the occasion is obvious. This is the baby that matters – now Papa will be happy. The girls, all dressed much the same, are merely decorative adjuncts.


My next picture shows the return of an elder brother from boarding school. He has a fresh open face and he is smiling to see his sisters and younger brother again. His school trunk on the floor plainly shows that he is home for the holidays. The younger brother (in his sailor suit) looks up wistfully. One day, it will be his turn to go to a proper school. Again, adoring sisters crowd round. 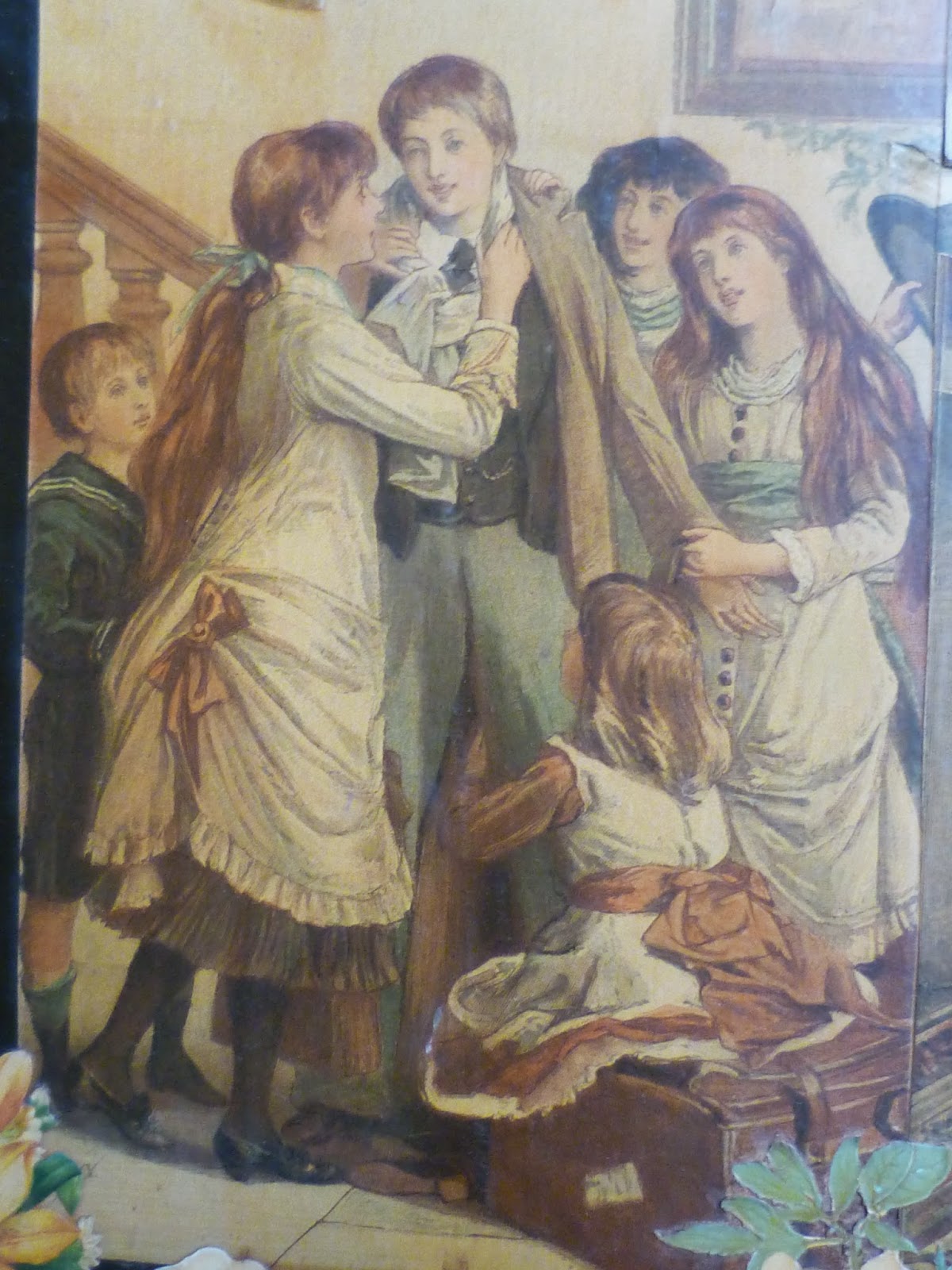 
What strikes me is that the boys in the pictures are going somewhere; they are moving on – symbolized by the sailor suit and the school trunk. The girls have no useful role to play, apart from that of marriage and bringing future boys into the world. They don’t go to boarding school; they will have a governess at home.


To what could a daughter aspire? Nothing much, according to my screen. There are a number of oval cartouches decorating the borders showing Latin lovers with the man serenading his lady. Tellingly, one lady is behind a grille – and her lover is reaching inside the bars to kiss her hand or, perhaps, to pass her a note. 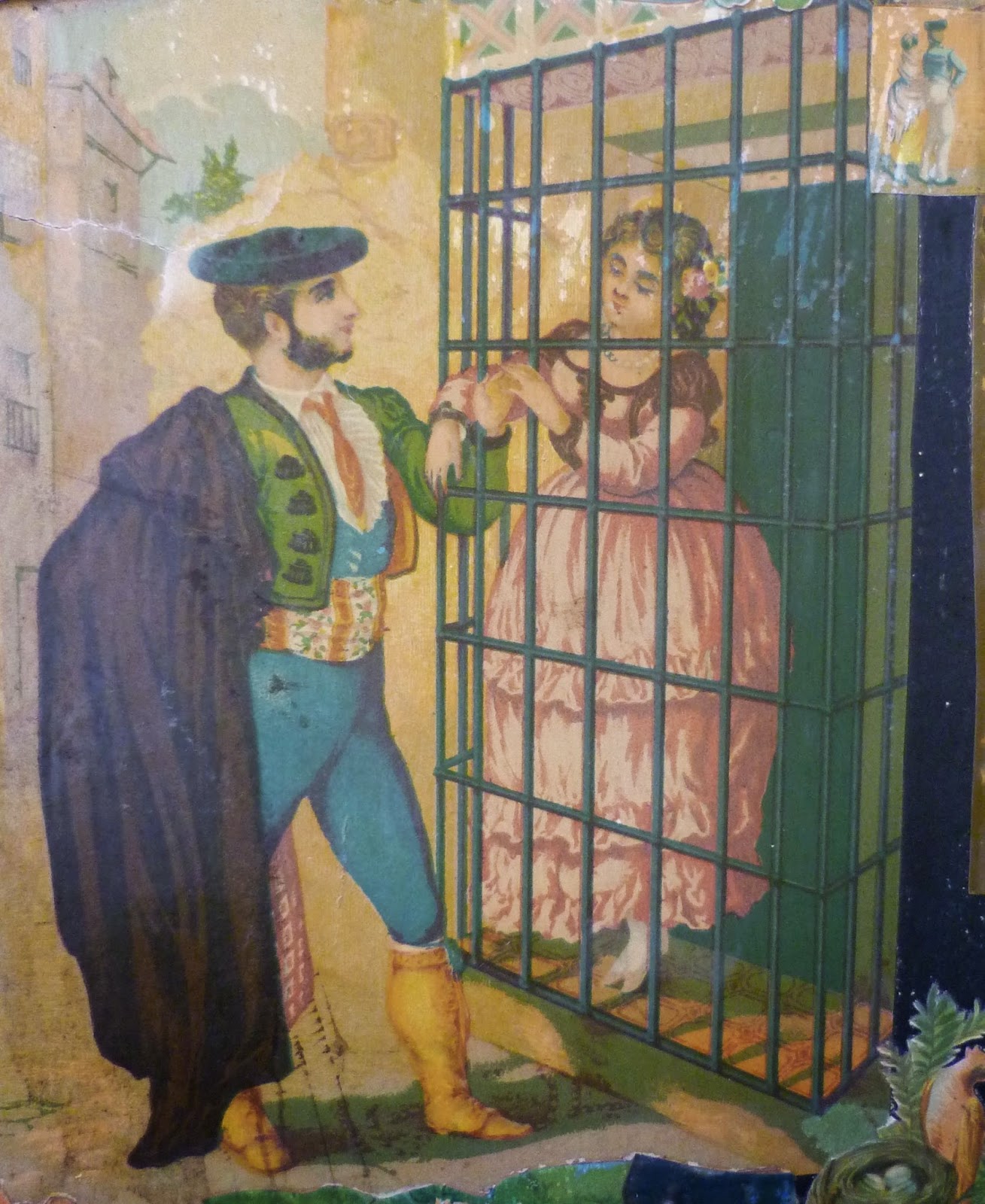 
Apart from showing the importance of sons, the other major theme of my screen is romantic love. Alas, there are no pictures of girls being proactive, apart from a lovelorn lady posting a letter into a hole in a tree. 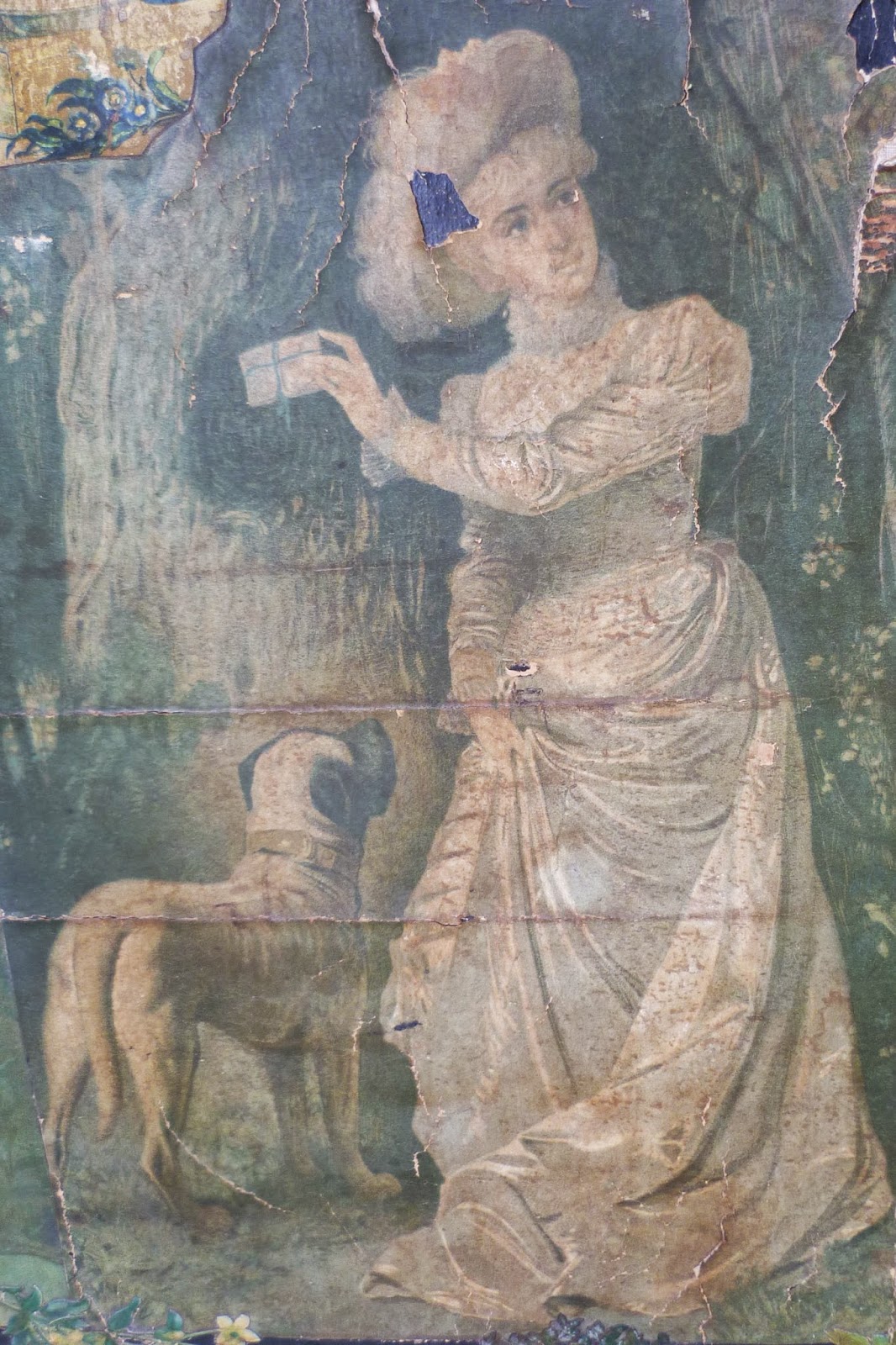 
There are plenty of stories on my screen but none are very positive for girls. The more I looked at the screen, the more I feared that the young lady who owned it had bought into the prevailing view that girls were to be Angels in the House, delicate creatures whose husbands would protect them from the rough outside world. 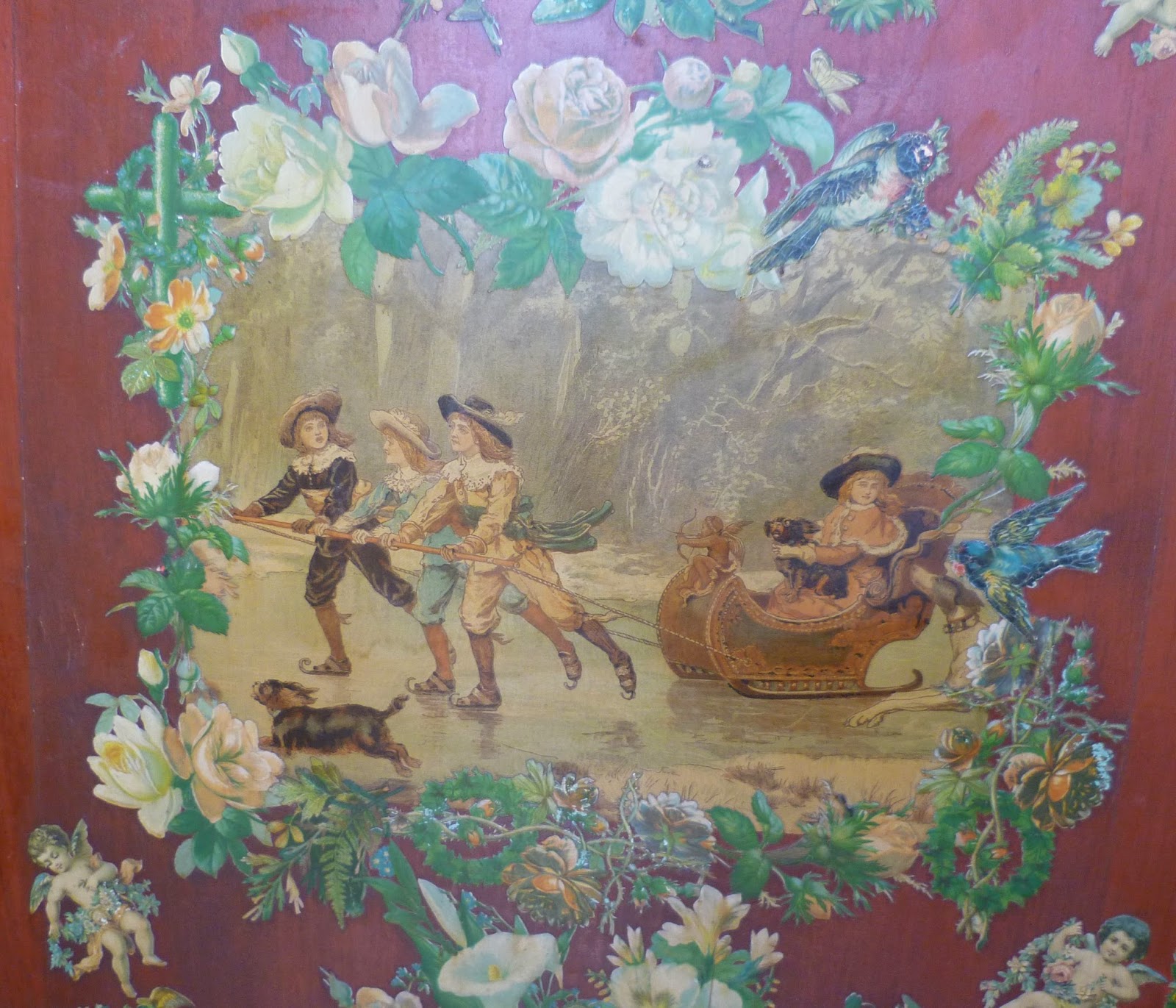 
The picture of the sleigh ride, for example, shows three young Cavaliers in 17th century costume (and they are certainly not Roundheads!) pulling a sleigh carrying a pretty little girl carrying a little dog. On the front of the sleigh, a carved cupid is about to shoot an arrow at one of the boys. The inference is obvious – shades of Lydia Bennet tenderly flirting with six young officers at once. You can see where my young lady’s fantasies are going.


Almost the entire screen is devoted to pictures showing the importance of the male sex; and romance appears to be the young lady's sole interest. I just hope her personal story had a happier ending than Lydia’s with Wickham.


Elizabeth Hawksley
Posted by Unknown at 9:05 AM

What a fascinating blog, Elizabeth, though rather a sad one in some respects. If every object has a story to tell your screen does that in spades both on a personal level for the young lady involved and also in a wider context. It makes me very grateful for the progress we have made!

I love screens like that and have actually bought some decoupage pictures to try and make one (when I have time) - hopefully mine won't be as blatantly sexist! Fascinating stuff, but I guess if you were brought up to believe it, it would have been hard to break out of that mindset. During my genealogy research I came across a family where they had eight girls and then a boy at last - I imagine the rejoicing there must have been! Poor girls.

It does make a statement, doesn't it, Elizabeth? Sad but not unusual for the time, is she was brought up to believe this was her role in life. I did wonder, looking at the family pictures, if perhaps she had lost a brother and this was what might have been...

Thank you for your comments, Nicola, Christina and Melinda/Sarah.

I do agree, Nicola. I am extremely grateful that I had opportunities for education and doing something with my life that the young lady who owned my screen did not.

You might like to know, Christina, that in the original picture of the boy coming home from school, there are two more sisters to the right of the picture! The picture is damaged there, so I trimmed it. But, of course, those were the days of huge families.

I know what you mean, Melinda/Sarah. I, too, wondered why she was so keen on showing girls with brothers. I find it difficult to believe that they were always nice to their sisters - or that the sisters were always adoring. It may have been wishful thinking - and she had a perfectly horrible brother who bullied her.

Thank you, Nicola. I agree with you. Thank goodness I had the opportunity to be properly educated and was able to do something with my life.

Thank you, too, Christina. You might like to know that the picture of the boy coming home from school actually has two more girls to the left of the picture! The screen was damaged there, so I trimmed it. But those were the days of big families.

And thank you, Sarah/Melinda. I, too, wondered about the story of my screen's original owner. Why are there so many pictures of brothers with adoring sisters? Wishful thinking? I can think of a number of instances - in 'Jane Eyre' for example, where boys are horrible to girls - as Jane's cousin John is to her.

Fascinating but depressing. Reminds me of the Spencer family. Didn't they have 5 daughters (including Diana) before the essential boy came along? And he got the estate, of course!

I'm so sorry, Joanna. I didn't mean to depress you! I should add that the owner of my screen obviously loved dogs, too. There are lots of them decorating the borders. And she also has pictures of Pickwick and Sam Weller - the only literary reference - so we can at least hope that she enjoyed 'Pickwick Papers'.