Minor characters are always fun to write and in my new book, House of Shadows, I have an “offstage” character, Lady Evershot, who is modelled on a famous Georgian aristocrat, Elizabeth Berkeley. Lady Elizabeth, the daughter of the Earl of Berkeley, married the 6th Baron Craven and they lived at Ashdown House for a couple of years, their two eldest children being born there. Alas the Craven marriage was not a happy one; from the earliest times Lady Elizabeth was complaining that her husband was uncultured and uncouth whereas she was more creative, an artist and a writer. After not many years they drifted apart and she had an affair with the French ambassador whilst he set up a mistress who styled herself Lady Craven, much to the real Lady Craven’s fury. Eventually she left her errant husband and travelled abroad.
The author Sybil Rosenfeld, in her book Temples of Thespis, describes Lady Craven’s subsequent life:
“She travelled about Europe for some years until she finally settled at the court of the Margrave of Anspach in 1787 as his “adopted sister”. In 1791 only a month after she heard of the death of her husband she married the Margrave in Lisbon and persuaded him to give up the ruling of his principality and retire with her and his fortune to England. Her precipitancy was considered indecent and, on her return, she found herself cold-shouldered by the court and high society. The Margrave, a stolid German who seems only to have wished for a peaceful life, purchased Brandenburgh House a country villa on the bank of the Thames at Hammersmith and spent the rest of his days there. His wife built a theatre in the grounds where she could entertain him and at the same time indulge in her favourite past time of taking the centre stage….
Despite the fact that the Margrave was related to King George III his wife was not received at court

as she was considered too scandalous. Nothing daunted, she spent her time at the races and organising private theatricals, which were often performances of plays she had written herself.

The theatre at Brandenburg House (interior pictured right) was built as a faux castle in the manner of Walpole’s Strawberry Hill and the productions were lavish and extravagant with the Margravine frequently centre stage. As a larger than life figure of the era, she was lampooned by the caricaturists of the time and described my Walpole as entertaining but “infinitely indiscreet.” 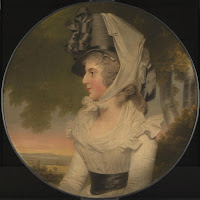 Perhaps private theatricals suited the former Lady Craven’s need to be the focus of attention and gave her the opportunity to assume a number of different roles and act out her fantasies. In that she was not alone since it was a popular entertainment in upper class Georgian society. Nevertheless she snubbed her eldest son’s wife who was a “real” actress, Louisa Brunton. The two were said to cordially detest one another. Perhaps it was envy on the Margravine’s part rather than snobbery!

Posted by Nicola Cornick at 1:46 PM

Lady Elizabeth sounds most interesting, Her dislike for her daughter in law is amusing in view of her own love of theatrical performances. Mind you the status of actresses was a bit dubious with many being regarded as little better than prostitutes. No doubt many actresses did become the mistresses of wealthy admirers.

Thank you for the comment, Stephen. Lady Elizabeth's life does read rather like a novel. She's not a woman I could warm to but I do admire her for the unconventional life she lived. I believe Louisa Brunton came from a professional theatrical family and she was not a courtesan as others of her profession were, but certainly she was very much looked down upon by the nobility.

What a fascinating story, Nicola. One can't help admiring Lady Elizabeth - even though I agree with you that she doesn't sound a particularly nice person - at least she broke free of the constrictions of what a lady in her position should be and did what she wanted!

I suspect you may be right that she was jealous of Louisa. After all, if Louisa was a professional actress, she was probably a lot better at it than her mother-in-law! Not to mention being younger. Miaow!

Hello, Elizabeth! Yes, I do admire Lady Elizabeth for being "her own person" and for travelling to all those exotic places on her own (albeit with a carriage, servants and a baggage train!) I suspect she was quite a forthright person who could only ever see things from her own perspective. As for poor Louisa, she didn't get very good reviews, I'm afraid, but she was an acknowledged beauty which her mother in law was not. Miaow indeed!