In An English Country Garden 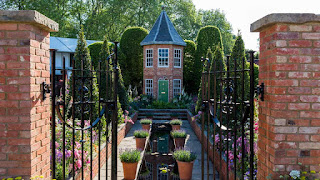 Flowers have been much on my mind recently. A trip to the Chelsea Flower Show reawakened all my enthusiasm, partly because of the show gardens and partly because of the enormous range of flowers in the marquee. I think my favourite show garden was the Harrods Heath-Robinson inspired garden, which had revolving flower beds and window boxes that went up and down, as well as a roof that lifted on and off the folly. If you haven't seen it, you can watch it here . But although the eccentric British touches were wonderful, it was the planting that really won me over.

This reminds me of one of my other favourite gardens at Chelsea,  which showed traditional techniques for extracting dyes from the leaves and flowers of various plants as well as their roots. It impressed the judges as well, winning a silver gilt medal.

If you're thinking of visiting Jane Austen's garden, summer is the perfect time. You can sit on the seat which rings the oak tree - believed to be descended from a tree planted by Jane Austen - or you can picnic on the lawns, imagining Jane choosing some choice blooms for the house or picking a sprig of mint to go in with the potatoes!
Posted by Amanda Grange at 1:36 PM

It's a lovely garden - Chawton looks beautiful at this time of year, I quite agree Mandy!

I enjoyed the Heath Robinson garden, too; especially as today is cold, wet and windy. Chelsea was lucky, weather-wise this year.

When I went it was cold, Elizabeth, but luckily it didn't rain. I would have liked a bit more sun, though!

Unknown said...
This comment has been removed by a blog administrator.
12:26 AM