I was actually invited to the preview of the V & A exhibition: Undressed: A Brief History of Underwear to review it for my local Archaeology and History Society Journal – which I’ve done. But I also wanted to take the opportunity to study Regency underwear with a view to writing a blog or two about it. Amongst other things, I wanted to find out the difference between stays and corsets. 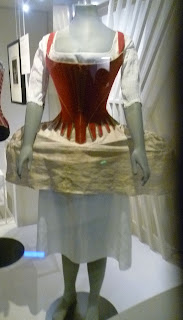 1780s stays and hoop
To answer this, I needed to start before the Regency period. The photo above shows stays and hoop from the 1780s (the shift is modern). They were ordered by a Miss Davis from a London robe maker: stay-making was a skilled occupation. The hoop is made of linen and cane. Women did not wear drawers at this date – and you can see why. The hoop looks very cumbersome – imagine the problems manoeuvering it up and down stairs and squeezing through doorways, let alone having a pee! To have to cope with drawers as well would be almost impossible.


The linen shift, which was easily washed, provided a hygienic barrier between the skin and the stays which created a rigid foundation for the gown. The top layer was wool, linen and canvas, and the lining was glazed linen. The glazing, which was non-absorbent, meant that dirt was less likely to stick. The structure was held in place by whalebone. You can see that the breasts are flattened rather than supported, and it’s not surprising that actresses in historical roles have frequently complained that stays are uncomfortable. 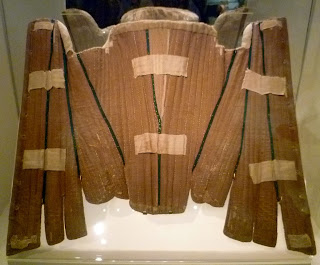 
This was one of the most fascinating objects in the exhibition – mainly because of its rarity. The stays are made with wooden busks (slats) padded with wool for comfort, and the lining is cotton. I’ve no idea how the owner put them on but she must, surely, have been able to do so by herself. They, too, look uncomfortable - there’s very little give and take. Bending must have been hell.

New style corset, 1800 (* see below)
By 1800, things have changed. The garment above is a completely different animal. For a start it’s more delicately-fashioned and, dare I say it, sexier. It’s made of cotton, linen and whalebone but now there’s silk and lace, too, and there are added gussets to support the breasts. This garment is about enhancement of the female figure, rather than control. It also has a new French name – corset. 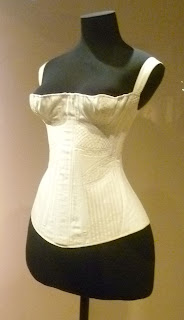 
Twenty years later, the corset has moved on again. It is more sophisticated. There are quilted gussets to support and lift the breasts which are separated by a central busk (a flat piece of wood) which also flattens the stomach. It laces at the back – so its owner must have had a maid or helpful sister (or lover) to do it up. Gussets over the hips allow for curves. The waist is only 48 cms (19 inches) and there are some alarming X-rays nearby which show just what damage a tight corset could do to the internal organs.
There was also a helpful note nearby which explained that front fastening corsets only came in in 1829 and weren’t common until the 1850s. *This gives the new 1800 style corset an extra frisson of interest: it laces up at the back but the decorative front silk lacing hints that, shockingly, it just might undo there, too. (The possibilities here I leave to your imagination.) 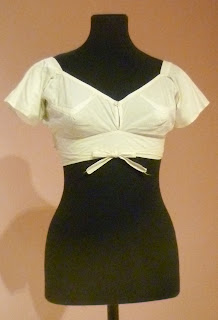 
I was intrigued by this cotton bust bodice. It is home-made for a high-waisted dress to allow for breast-feeding – you can see the button at the base of the V. It looks astonishingly modern.


The dressing-gown above is also designed for easy breast-feeding; there are hidden vertical openings down the bust. It’s rare to see a female dressing-gown of this period and I was pleased to see this one; I doubt that a normal dressing-gown would differ much in style. It’s good to know that the young mother still wanted to look becoming and the garment has its share of frills and lace.


I loved this simple, yet elegant dress. It is exactly the sort of dress that a daringly fast Georgette Heyer character might wear – Bab Childe in An Infamous Army, for example. It is instantly obvious that it needs a silk petticoat and drawers to make it at all respectable. It is also, surely, best suited to someone young and slim.
Jane Austen’s letters to her sister Cassandra frequently mention the buying of lengths of muslin. For example, on 18th April, 1811, Jane is in London. She writes Cassandra a somewhat incoherent letter:
I am sorry to tell you that I am getting very extravagant & spending all my Money; and, what is worse for you, I have been spending yours too, for in a Linendraper’s shop to which I went for check’d muslin, & for which I was obliged to give seven shillings a yard, I was tempted by a pretty coloured muslin, and bought ten yds of it, on the chance of your liking it; but at the same time if it shd not suit you, you must not think yourself at all obliged to take it; it is only 3/6 pr yd, & I sd not in the least mind keeping the whole.
What one would not give to see the resulting dresses for ourselves!
The V & A’s new exhibition, Undressed: A Brief History of Underwear, sponsored by Agent Provocateur and Revlon, is on until 12th March, 2017. www.vam.ac.uk/undressed . It was a most enjoyable and revealing experience - in every sense of the word.
All photos taken by the author
Elizabeth Hawksley

Very informative post. I'll be visiting the exhibition later this month, so it is lovely to have a useful preview. Thank you.

Thank you for your kind comment, Jan. I'm sure you'll love it. Some of the modern items are truly outrageous!

Love this. And the gentleman's one on your blog is also extremely interesting. I knew most of the data, but to see it is something else. Thank you for the very informative pics.

Thanks - underwear is always fascinating.

Thank you for your comments, Elizabeth. I do so agree with you. It's one thing to know something and quite another to see it for yourself. The thing that struck me, particularly re: Regency women's corsets, was how uncomfortable they must have been - those wooden busks look most forbidding and I'm sure I'd be worried about the whalebone sticking into me.

I loved your comment that underwear is always fascinating, Fenella - and you're right! Underwear, particularly for women, always seems to have a political dimension, too. One might argue that it's also about social control. It's surely much more difficult to demonstrate for the vote, say, or chain yourself to the railings, if your corsets make free movement almost impossible!

Wonderful! Thanks, it was an absolute delight, so much detail and information! Loved it.

Thank you for sharing this information. It is fascinating. I had heard of stays, but never knew what they were.

Thank you, Joana. I was a bit worried about information overload but decided that it would be OK as long as I confined myself to things I, myself, wanted to know. I'm happy that you enjoyed it.

Perhaps 'stays' v. 'corsets' is a class thing, Deborah Ann. I could be wrong, but I get the impression that the ordinary working woman, who probably made her own stays (as in the second photo), continued to call the garment 'stays'. I've never heard of a home-made corset.

It's an interesting point. Thank you for bringing it up.

I feel happiness to read the content that you are posting.deals and savings