I was reading the newspaper today and came across an article about a landowner in Somerset who was so fed up of beavers eating his trees that he was offering a reward to anyone who got rid of them. This surprised me as I knew beavers had been extinct in the UK for hundreds of years and had only been re-introduced recently into a few places. I assumed that they would be a protected species but that's not the case. So those beavers need to keep their heads down.

Every so often I’m reading a historical novel and a wolf stalks across the historical landscape, or a red kite swoops down in the streets of London and carries off a kitten. Fascinating background colour, but it does get me wondering about extinction dates for various species in the UK because nothing will pull me out of a book faster than a bear chasing someone (unless of course it's an escaped dancing bear!)

So here’s a round up of a few extinction dates for species in Britain, although some of these are in dispute.

climate turned cooler and wetter. Then animal bones were discovered in a cave in Yorkshire that were carbon dated to about 400 – 500 AD. Just as I love to think that the Scottish Wild Cat still prowls the glens, so the thought of a lynx adds a perfect touch of mystery to a book set in the Dark Ages. The

Bears are thought to have died out in Britain shortly before the medieval period due to heavy deforestation and hunting by humans. Bones and skulls have been found scattered in many parts of the Scottish Highlands while bears are often depicted on Pictish stones. This is pretty amazing to me. Despite having seen bears in the French Pyrenees I just can’t get my head around the thought that shortly before the Norman Conquest you could have been wandering around a forest somewhere in the UK and bump into a bear. 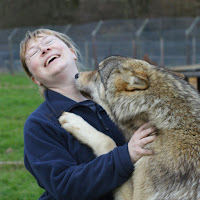 I love Scotland and sometimes when I’m standing in the forest listening to the silence I imagine what it would be like to hear the night split by a wolf’s unearthly howl. The wolf was exterminated in Britain after centuries of persecution. The last wolves were in the Scottish Highlands and the last one was reputed killed in 1740. I think it would be pretty cool to feature a wolf in a book set in the Highlands in the 18th century.


As someone who has walked with wolves at the Wolf Trust, I admit to a huge admiration for these fabulous animals. The one licking my face in the photograph was 6 months old and a big cub.

The extinction of the Wild Boar in the UK is complicated by the fact that it was re-introduced several times, notably in the 17th century. The re-introductions were not successful as many people saw the boar as a threat to agriculture and hunted it. Wild boar farming in England began in the 1970s and 1980s and since then populations of escapees have established themselves in the wild. On the basis of this evidence I think it would be quite credible to have a wild boar featuring in a Regency-set book!

The Red Kite was never completely eradicated in the UK. Whilst you wouldn’t see many kites in a 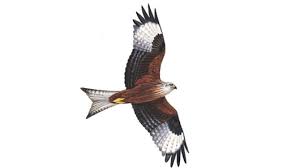 city these days a remnant of the population survived in Wales and it was recently re-introduced into the Chilterns and has spread very successfully across parts of the south of the UK. Indeed it was reported in 2006 that a Red Kite had been seen over London after an absence of 150 years and when I was on the train a few weeks ago I saw them flying over Reading.

The streets of Shakespeare’s capital were full of red kites. He referred to it as “The city of kites and crows.” The birds were scavengers, never short of a meal at a time when people threw their rubbish in the street. They also stole washing off lines for their nests. But gradually improving public hygiene and waste-disposal robbed the red kite of its niche in the London ecosystem, and by the end of the 18th century it was extinct as a breeding bird. The last sighting on the streets of the capital was in 1859.

We've all come across some anachronistic flora and fauna mentioned in historical novels sometimes and perhaps it doesn't matter but it's interesting to know which animals and birds were actually around when!
Posted by Nicola Cornick at 4:30 PM

Fascinating post, Nicola. I find it very cheering that long extinct from our shores creatures can make a comeback - like the osprey or the red kite.

What I have noticed, though, and which saddens me, is how few birds are around compared to when I was a child. I lived in the country and flocks of yellow-hammers and chaffinches were an everyday sight. Nowadays, you see them in ones and twos, if at all.

Our Regency heroes and heroines would have been much luckier in that respect.

Yes, that is very true, Elizabeth. The birdlife was so much more prolific in their time and the butterflies as well. It would have been a very different natural world.