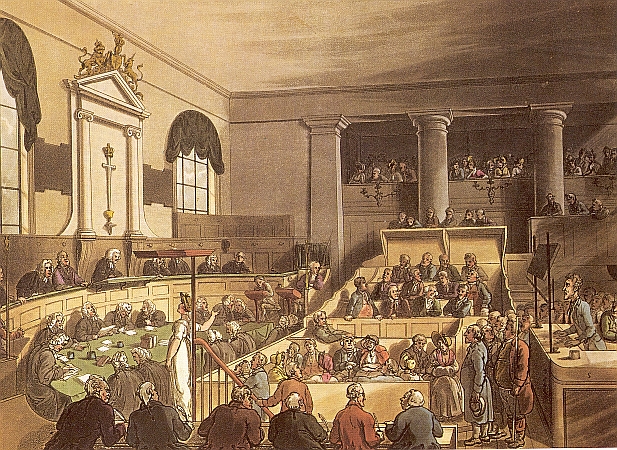 Specifically England, because the process was different in Scotland.
Recently I’ve been researching trials for crimes in the mid eighteenth century, and oh my, how different they were!
We wouldn’t recognize the legal system then. From a system dominated by the Waltham Black Acts (the ones that said you could be hanged for almost any offence) to the way criminals were caught and prosecuted, it was all very different.
For trials, first of all prosecutions had to be brought by somebody. The state did prosecute some crimes, most notably treason. Not petty treason, though, which was killing a spouse. There had to be an accuser and an accused, and in most cases the Crown didn’t stand in for that. I’m still coming to grips with what all that meant.
If this was your first offence, you could claim Benefit of Clergy. That meant if you could read a passage from the Bible, then you were let off. It was meant to encourage literacy and education. The trouble was, they used the same passage every time. And there were no centralised records. So if you were taken in a different passage, or you gave a different name, you could get away with it as long as you didn’t come in front of the same magistrate and he happened to remember you.
There was no police force, no civilian law enforcing organisation. There were thief-takers, but they were often corrupt, and took money from both sides. The populace were against setting up a police force. In short, it was a vote-loser, and it wasn’t until the 1790’s that England had any kind of police force; the Thames River Police, a privately funded organisation in its early years. The great reforms instituted by Sir Robert Peel in the 1830’s included the establishment of a civilian police force, so all through the Georgian period, there was exactly nobody to keep the peace.
So that meant there was nobody, barring the parish constable and the magistrate to enforce the law. The parish constable, the night watchmen and the beadle did what they could, and if anyone was taken, imprisoned and brought to trial, there were officials for that. The magistrates were generally drawn from the gentry, but the Lord Lieutenant of the county was usually an aristocrat. County and Country were at loggerheads for much of the century, providing checks and balances, but once the population began to move to the city, and Britain slowly became an urban country instead of a rural one, that had to change.
I’ve read over fifty accounts of murder trials in the Old Bailey records (that’s where I’ve set the trial in my story). You can read them online, and I do. They’re real slice of life accounts, freezing moments in time. That’s probably why they are so popular. One thing they have in common; they pass with dizzying speed. A man could kill his wife, be tried and executed in the space of a month. No waiting months for a trial, prepping for it, or having time to consider. It was done and dusted.

Email ThisBlogThis!Share to TwitterShare to FacebookShare to Pinterest
Labels: law and order, trials in the eighteenth century, Veiled In Blue

Very interesting post, Lynne. What was the position of women in all this? Could she bring a case to court, for example?