It started with a picture, a small portrait of a lady in Tudor dress that I saw on the wall of my uncle’s house in Wiltshire. It fascinated me She looked demure but with a little smile, as though she was hiding a secret. There was one pearl missing from her headdress. The portrait was inscribed with the name of Anne Boleyn but it wasn’t a copy of any picture of Anne that I had ever seen. I started to speculate, as writers do. What if the inscription was false and this was quite a different lady, the same era, and with royal connections, but someone whose story was yet to be told.

That was the first inspiration for The Phantom Tree, my new timeslip book that 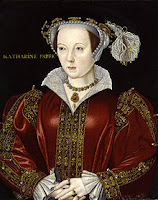 is out at the end of the month. Tudor history had been my first love as a child and it was exciting to return to it. I write about women from history who have fascinating, but less well known stories and one of the people I had been interested in for a long time was Mary Seymour. Mary was the daughter of Katherine Parr, the sixth wife of Henry VIII and her second husband, Thomas Seymour, of the Seymours of Wolf Hall in Savernake Forest. Mary was born at Sudeley Castle in 1548 but it isn’t long before she disappears from the historical record. I wanted to research her story and imagine the life she might have had.

I live on the border of Wiltshire and first visited Savernake over twenty years ago. I’ve have seen it in all the seasons, when the trees are ghostly winter skeletons and the frost is thick on the bracken, through the new life of spring, the drowsy heat of summer when the Purple Emperor butterfly darts through the leaf canopy, and into the vivid colour of autumn. I love the atmosphere of the forest and the sense of peace. There aren’t many places left in the British Isles where you can lose yourself for hours amongst green lanes and oaks that have stood for a thousand years.

Researching the local roots of the Seymour family was a fascinating process. I love looking at the story behind the story and here was a family that rose from being country gentry to be one of the most prominent dynasties in the land. What better way to get a feel for their journey than to walk in their footsteps in Marlborough and Savernake and the villages around?

I made several trips to Marlborough and to Savernake during the year that I was writing The Phantom Tree. The first was in the summer and we took the dogs and a flask of tea and homemade chocolate brownies. Several years before we had started to visit and map all of the ancient named oaks. This was difficult in the summer because many lie in the heart of the forest off the beaten track. The paths become overgrown with brambles and bracken, strands of wild rose and honeysuckle, and tiny, sweet raspberries and strawberries growing wild in the clearings. They were a delicious supplement to our afternoon tea. We followed tracks whose names recall a lost age and a mysterious past: The Charcoal-Burner’s Road, Long Harry, Postwives Walk. We found the Big Belly Oak beside the modern A346 Marlborough to Salisbury road. It is the oldest tree in the forest, a sapling at the time of the Norman Conquest. It is not known when the convention of giving the oldest oaks names was introduced although the King Oak is recorded in a document of 1634. It is matched with The Queen Oak, in honour of Henry VIII and Jane Seymour, his third wife, the aunt of my heroine Mary.

In the depths of the forest, standing near the ancient park pale that once marked the boundary of the medieval hunting ground, we found the Green Fluted Oak, so named because the vertical grooves in its trunk look like a Grecian column. I was on the hunt for one particular tree, The Duke’s Vaunt. This is another thousand year old oak deriving its name from Edward Seymour, Duke of Somerset and Lord Protector of England, the elder brother of Jane Seymour. In its prime it was a huge tree but today it is in decline, having split, and is only a shadow of its former glory.

The dogs love visiting the forest in autumn and winter, as do I. The scents are different, the paths 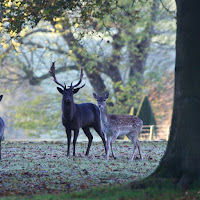 coated in frosty leaves and the ponds frozen over. You catch a glimpse of the deer disappearing through the bare trees like wraiths, or hear their sharp bark on the cold air. The Savernake of today looks different from the forest of Tudor times. In the 1740s Capability Brown landscaped large parts of the woodland, creating ornamental lawns and planting vistas of trees, designing the grand avenues and rides. Yet beneath the landscaping and the hum of traffic you can still sense the longevity of the forest and the myths and legends stretching back into time.

Once upon a time, Wolf Hall, the medieval manor of the Seymours, was in Savernake Forest but today the woodland covers a smaller area than it did in the sixteenth century and to seek out Wolf Hall I had to take the road to Burbage. On the corner of a minor road is Wolf Hall Farm, built near the site of the earlier timber-framed manor house. Jane’s father, Sir John Seymour, had served with Henry VIII in France and the family were ambitious for advancement at the Tudor court. In 1535 Henry VIII stayed at Wolf Hall as part of a royal progress and it is said he courted Jane Seymour there.  Rumours that Henry and Jane were married at Wolf Hall are false but it is certainly the case that he returned there in 1539, when there was a lavish feast in one of the old barns at the manor. 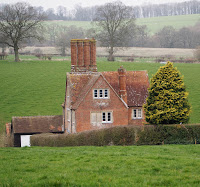 By the time my story, The Phantom Tree is set, some twenty years after King Henry hunted in Savernake Forest, Wolf Hall had become an old, draughty, inconvenient manor that was no longer considered grand enough for the status of the Seymour family. In the book, I write about it as a house in a state of ramshackle neglect, ignored by the Duke of Somerset’s son, who had plans for a magnificent house nearby at Tottenham Park. Stone from Wolf Hall was taken to build the new house; eventually Wolf Hall became derelict and fell down. There is a trace of overgrown earthworks still visible that mark the spot of the original manor and I found another remnant of the original Wolf Hall when I visited the church of St Mary at Great Bedwyn. It is a stained glass window that features a crown, Jane Seymour’s heraldic device of a phoenix rising from a castle between two red and white roses, the Prince of Wales feathers, and a Tudor rose, and it is said to have been taken from the medieval manor. This is also the place where Jane's father Sir John Seymour is buried.

The Phantom Tree, like Savernake Forest itself, has its roots set deep in the history and landscape of

Wiltshire, drawing on this fascinating part of the county for its inspiration. Wolf Hall may be long gone leaving only a name and a legend, but Savernake Forest is a place whose ancient oaks and woodland paths lead us in the footsteps of the past.

What a fascinating piece of research, Nicola. I had no knowledge of Savernake Forest and your descriptions absolutely pulled me into the place in imagination. This makes me even more eager to read The Phantom Tree. Sounds like you've picked a truly interesting character for your heroine.

Thanks so much, Liz! yes, Savernake is an amazing place and one of those where the historical atmosphere simply grabs you. So inspiring for a writer!

I loved this post, Nicola, especially the evocative photos of Savernake Forest and the history behind it and the Seymour family. I very much enjoyed 'House of Shadows' and I'm sure that 'The Phantom Tree', too, will be another gripping and atmospheric read.

I got my first electronic cigarette kit on Vaporfi, and I enjoy it a lot.