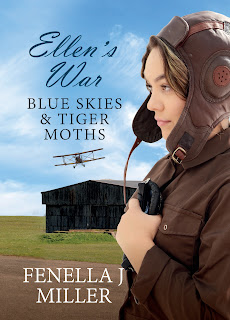 At the moment I'm writing the second book in my three book series, Ellen's War – An ATA Girl. The first book, Blue Skies and Tiger Moths came out earlier this year. The second book follows Ellie Simpson from June 1940 until December 1941 – at least that's when I think it will finish. I don't really know until I get there. In this one she leaves the WAAF and joins the Air Transport Auxiliary. Therefore, this month I thought I'd tell you a bit about them. The trouble is I find the subject so fascinating I'm doing rather more research then I should and a lot less writing. This is why I love being a historical fiction writer – I can immerse myself in fascinating facts.
The ATA was started by the director of British Airways. He could see that when the second war started there wouldn't be enough trained pilots to protect Britain if they were used to ferry new aircraft from the factories and take back damaged ones for repair. Also there would be a suspension of civil aviation which meant these pilots would have no work. 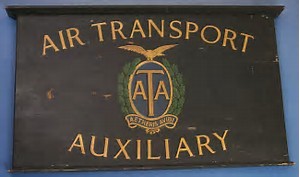 The RAF had strict entry requirements and many of these civilian and commercial pilots would be considered unsuitable for operational service.
Initially just over a hundred men were recruited from all walks of life. It soon became apparent that these gallant few would not be enough to move trainers, fighters and bombers from storage units to RAF squadrons stop the RAF had thought they could use their own pilots for this but it became glaringly obvious after Dunkirk they would need every able-bodied RAF pilot in active service.
Most of these ATA pilots were limited to flying single engined training aircraft so they were given conversion courses so they could fly Hurricanes and Spitfires and multi-engine types.
Then Pauline Gower stepped in and convinced the powers that be that well-trained women could do the job just as well as men. So on January 1st 1940 eight women pilots were employed to ferry Tiger Moths and Pauline was appointed commander of this first group of women flyers.
They were based at Hatfield in a small office behind the de Havilland hangars. There sole job initially was to fly planes from the de Havilland factory to training airfields and storage units, for the most part in northern England and Scotland. This was the middle of winter and Tiger Moths were open cockpit. This was the first time in history women would be officially given the task of ferrying military aircraft and they did a wonderful job at it.
By 1941 the women were at last cleared to fly class II aircraft, Hurricanes and Spitfires. More women from all walks of life were taken on until eventually there were twenty-two ferry pools – some pools like Hamble, Crossford and Hatfield were all women ferry pools but most of the others were mixed with men and women pilots working side by side.
Many foreign pilots also found employment in the ATA. They were known as " The Flying Legion of the Air," as there were men and women from thirty other countries in the organisation.
In 1943 female pilots who had previously earned 20% less than male pilots were at last given equal pay. By now they were flying all class of aircraft, with the exception of class VI flying boats. They flew using only a compass and gyro and could only take off and land when the weather was clear.
By the end of the war ATA pilots had delivered over 300 000 aircraft of 51 different types. The ATAs total complement consisted of 1152 men and 166 women. There were also aircrew, radio officers, ground engineers and ATC cadets. 129 men and 20 women were killed in service, including Amy Johnson.
Fenella J Miller

I really enjoyed this post, Fenella. What an inspiring story!

Thanks - I wish I'd been an ATA girl.

I had no idea women flew planes during the war. How fascinating. What a wonderful thing to learn.

If you want your ex-girlfriend or ex-boyfriend to come crawling back to you on their knees (even if they're dating somebody else now) you have to watch this video
right away...

(VIDEO) Have your ex CRAWLING back to you...?