Considering how many of Jane Austen’s heroes and heroines have lost a parent, there is remarkably little about mourning in her novels. The only characters who are directly affected by losing a parent are the Dashwoods in Sense and Sensibility. Elinor and Marianne’s father dies in February and Mrs Dashwood and her daughters remain at Norland Park for at least six months before they move to Barton Cottage in Devonshire. There are several reasons why Jane Austen allowed so long a time to elapse; first, it overs the first six months of secluded, deep mourning expected for a husband or parent, and, more practically from a novelist’s point of view, it gives Elinor time to get to know the attractive but diffident Edward Ferrars, brother of her mean spirited sister-in-law, Mrs John Dashwood, the new chatelaine of their home, Norland Park. 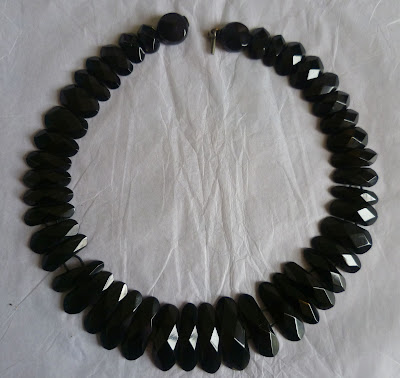 19th century mourning jet choker
﻿
However, once they are settled in Devonshire, they visit Mrs Dashwood’s cousin, Sir John Middleton, at Barton Park and enjoy a lively social life. Marianne meets the handsome and eligible Willoughby, and falls in love. The fact of them being now in half-mourning isn’t mentioned. And the following January, Elinor and Marianne accompany Mrs Jennings to London to enjoy what society has to offer without worrying about the propriety of it whilst they are in mourning. Possibly, the custom of lengthy mourning for relations was not yet so strictly observed in Society as it was to be later on; Sense and Sensibility was an early novel, first written in 1797-8. 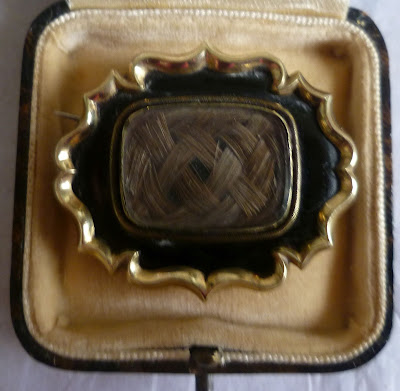 The mourning is much more overt in Persuasion. When Anne Elliot first sees her cousin Mr William Elliot in Lyme, both he and his manservant are in mourning for Mr Eliot’s wife who died six months earlier. Jane Austen uses Mr Elliot’s mourning to help Anne learn about his true character from her friend Mrs Smith who once knew him well. Even if he didn’t care for his wife, surely he should be affected by her sudden death only six months before. He certainly ought not to be making up to the mercenary Mrs Clay who, Anne suspects, has plans to become the second Lady Elliot. Is Mr Elliot exercising his wiles to forestall that happening? 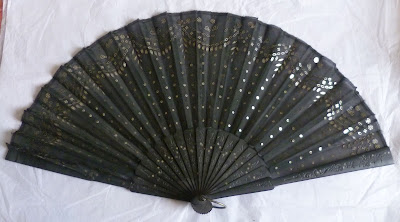 So what were the correct periods of mourning during the 19th century? Views became more extreme as the century wore on. At its height, a widow was expected to be in deep mourning for a year, wearing clothes made in matt black paramatta (a sort of silk/wool bombazine) and crepe. Twenty-one months later, she might leave off the crepe and three months after that she went into half-mourning for six months: grey, lavender, mauve, violet or grey and white stripes. As The Queen magazine put it: she was the victim of ‘a mild form of suttee’. 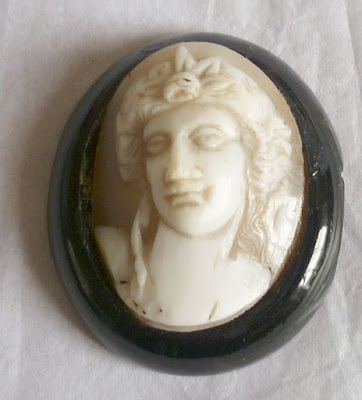 Cameo in jet frame
The mourning for a parent or child was a year. Again, one gradually ‘slighted’ the mourning. It must have been a relief to be able to wear jet ornaments, and, a little later, pearls, gold and silver and diamonds.


For grandparents, the mourning was six months, as it was for brothers and sisters. Uncles and aunts warranted two months’ mourning, great-uncles or aunts, six weeks, and first cousins a month. One had to lighten the mourning by degrees. 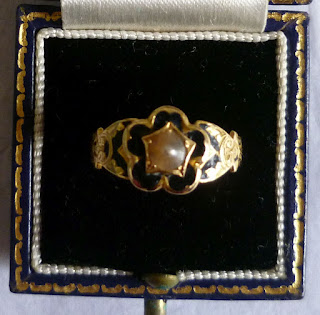 An amusing satirical sketch from Hoods Magazine is illuminating:


Lady: ‘I suppose you have a great variety of half mourning?’


Shopman: ‘Oh! Infinite – the largest stock in town. Full, and half, and quarter, and half-quarter, shaded off, if I may say so, like and India-ink drawing, from a grief prononcé to the slightest nuance of regret.’ 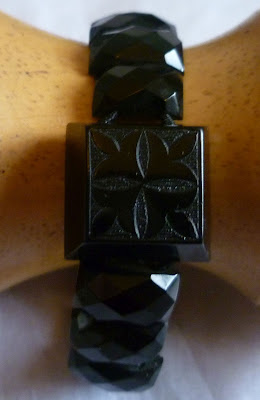 Jet bracelet
﻿
The half-mourning colours reminded me of an episode in Georgette Heyer’s Bath Tangle. Six months have passed since her father’s death, and Serena has ‘slighted’ her mourning. She chooses to wear a new dress made by Bath’s leading modiste: It was a striking creation, of black figured lace over a robe of white satin, the bodice cut low and the train long. With it she wore her diamond earrings and the triple necklace of pearls her father had given her at her coming-of-age.


The hero, Lord Rotherham, is coming to dinner, but, at this stage, they are not on good terms. Serena looks magnificent but ‘the comment she evoked from the Marquis was scarcely flattering, “Good God, Serena!” he said, as he briefly shook her hand. “Setting up as a magpie?” 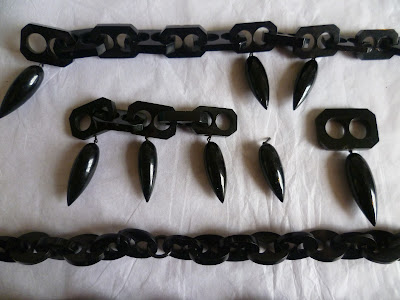 Georgette Heyer knew very well what she was about in Bath Tangle when she made her heroine, the 25-year-old Serena, a beautiful and queenly red-head, and her very young stepmother, Fanny, as a diaphanous and appealing blonde. She wrote to her agent: ‘They have to be like that so that each can look terrific in mourning.’


In other words, mourning can be a very useful plot device. For example, in The Toll Gate, the heroine Nell’s dying grandfather has high-handedly acquired a marriage licence, determined that Nell marries the hero Captain John Staple then and there; he wants to see the knot tied, before he dies. Nell thinks it’s outrageous. 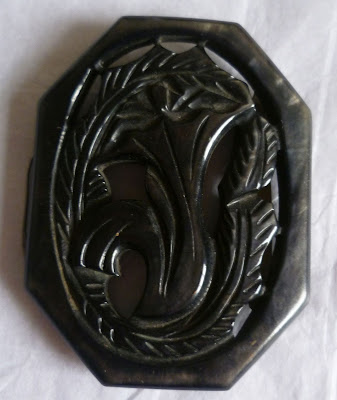 
John has to persuade her. He says, ‘Now, consider, my love! If we are to wait until your grandfather is dead, how awkward in every respect must be our situation! You will then scruple to marry me until you are out of your blacks, and what the deuce are we to do for a whole year? Where will you go? How will you support yourself? With so many scruples you would never permit me to do that!’ 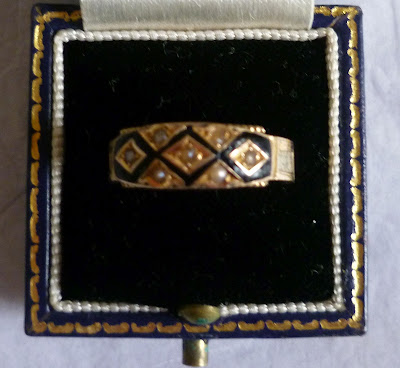 
Then there is Eugenia Wraxham, the tiresomely priggish fiancée of Charles Rivenhall in The Grand Sophy. Heyer needs Eugenia to be betrothed to Charles but not yet married. Mourning for an aunt is the answer and Eugenia ‘will not be out of black gloves for six months.’ (Interestingly, this is a longer period than is strictly necessary.)
When Charles, to his fury, discovers that Sophy has arranged a ball to launch herself into Society, and Eugenia has not been invited, his outspoken teenage sister says: ‘Can you have forgotten the bereavement in Miss Wraxham’s family?  I’m sure that if she has told us once she has told us a dozen times that propriety forbids her to attend any but the most quiet parties.’ 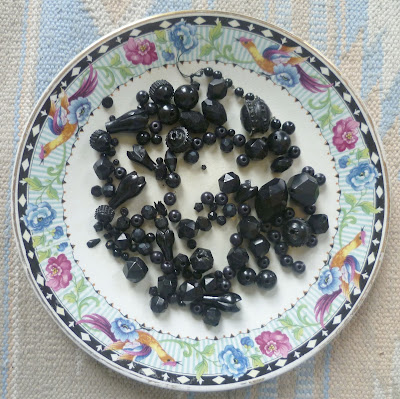 If Eugenia were not in mourning, then she and Charles would have married months ago. But Heyer has other plans for Charles…
So, if you need to up the ante for your hero or heroine, you might want to consider how useful an inconvenient period of mourning could be.
Elizabeth Hawksley

Such fabulous jewellery. I have a cameo similar to that, but I'm not sure the surround is black, Must check. Had not thought it might be a mourning one. I've just re-read all the Austens and of course your assessment is so right. Interesting how the different degrees of relationship required different mourning.

The Reluctant Widow is in mourning, of course, and she wears black silk and dove grey. Though she never knew her husband. I seem to remember a certain amount of discussion as to the propriety of her marrying the hero within too short a time.

I've just checked 'The Reluctant Widow'. At the end of the book, Carlyon tells Elinor that he hopes that she will become his wife and adds, 'When the period of your strict mourning is over it is my very ardent desire to be permitted to pay my addresses to you.' They don't discuss when the actual marriage will take place. I can't see that they could marry until the year was up, not if Elinor's reputation was to be maintained.

Ivo Rotherham and Serena in 'Bath Tangle' who become engaged well before the year of mourning is up, decide to put a notice in the Gazette to the effect that their marriage has taken place, privately, in Bath. Ivo adds, 'even your Aunt Theresa will not think it improper if I add to the notice that we are spending our honeymoon abroad and do not expect to be in England again until November.'