Jane Austen’s niece, Anna Austen Lefroy (1793-1872) was, as far as we know, her only relation who was also a novelist – though an aspiring one. When she was nineteen, Anna asked her aunt’s advice on her own novel Which is the Heroine? Does Dawlish have a decent library, she wanted to know - the answer was that it was ‘pitiful and wretched’. What I found interesting was that Jane understood her niece’s concern to get things right. Both wrote contemporary novels and they knew that accuracy was important. 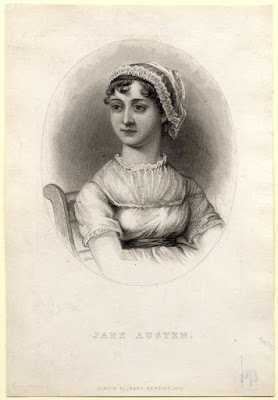 For example, in a letter to her sister Cassandra in January 1813, Jane asks her if she ‘could discover if Northamptonshire is a country of Hedgerows.’ This seems a very minor point but it is all part of her creation of a convincing depiction of the countryside around Mansfield Park, which is set there and which she was writing at the time.
Later that year, Jane learnt ‘from Sir J. Carr that there is no Government House at Gibraltar’ and that, therefore, she ‘must alter it to the Commissioner’s’. It gets a tiny mention by William Price when he comes to visit Fanny at Mansfield Park, but fellow writers will give Jane Austen a tick for her attention to detail.  We all know how mortifying it is to be picked up on some small point we have got wrong. Readers, then as now, rightly expect authors to have done their research properly. 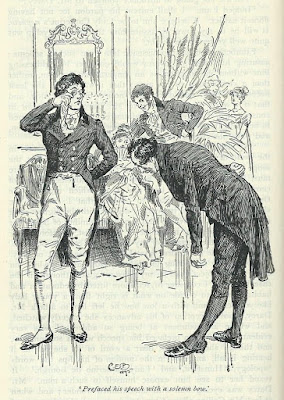 
Jane also picks up on a social point in Anna’s novel: ‘I have also scratched out the Introduction between Lord P. and his Brother, and Mr Griffin. A Country Surgeon (don’t tell Mr C. Lydford) would not be introduced to Men of their rank.’  It reminded me of Elizabeth Bennet’s acute embarrassment when Mr Collins insists on introducing himself to Mr Darcy at the Netherfield Ball: ‘Elizabeth tried hard to dissuade him from such a scheme; assuring him that Mr Darcy would consider his addressing him without introduction as an impertinent freedom…’  a moment nicely captured in Charles E. Brock’s illustration above.


Later in the same letter, Jane has some further advice for Anna: ‘We (she and her sister, Cassandra) think you had better not leave England. Let the Portmans go to Ireland. But as you know nothing of the Manners there, you had better not go with them. You will be in danger of giving false representations. Stick to Bath … There you will be quite at home.’
We note that Jane Austen follows her own advice in Emma. She does not follow Colonel and Mrs Campbell (and Jane Fairfax) to Ireland to visit the Campbell’s newly married daughter, Mrs Dixon; instead, Miss Fairfax insists on visiting Mrs and Miss Bates, her grandmother and aunt in Highbury, which is where we meet her. Miss Fairfax is doing that dangerous thing for a Regency lady – being proactive – and, when Mr Frank Churchill arrives, that precipitates a very tangled web of deceit indeed. 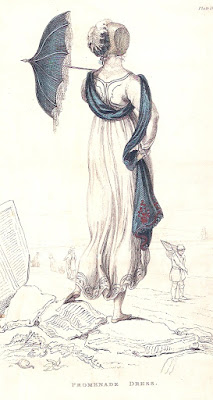 
We know that Jane Austen had a holiday in Lyme from her letter to her sister Cassandra in 1804. Sea bathing is mentioned, presumably from a bathing machine, something she really enjoyed; she attended a public ball; and walked for an hour on the Cobb. We have only the one letter from Lyme, but she must have taken the opportunity to note what it had to offer and used it in Persuasion many years later. I’d have loved a scene with Anne Elliot sea-bathing!
Jane wrote to Anna again in September 1814 with some more interesting plot advice: ‘We are not satisfied with Mrs F’s setting herself  as Tenant & near Neighbour to such a Man as Sir T.H. without having some other inducement to go there. A woman, going with just two girls growing up, into a Neighbourhood where she knows nobody but one Man, of not very good character, is an awkwardness which so prudent a woman as Mrs F. would not be likely to fall into. Remember, she is very prudent, you must not let her act inconsistently.’ 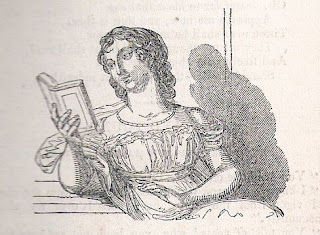 
She suggests: ‘Give her a friend, & let that friend be invited to meet her at the Priory and we shall have no objection to her dining there; as she does; but otherwise a woman in her situation would hardly go there, before she had been visited by other Families.’  This refers to the custom of leaving calling cards. Mrs F. will make sure that she leaves a calling card for any lady with whom she wishes to be acquainted – presumably those introduced by her friend. Her call should be returned within a week which will signify that they are happy to know her socially. But she could not possibly dine at the Priory before this has happened.
In all of Jane Austen’s novels, her heroines need to be properly introduced; apart from anything else, it establishes their social credentials. Emma’s friendship with Harriet Smith is important in giving Harriet an entrée into Highbury society – something which Harriet, a mere parlour–border with a dubious pedigree, could never have done on her own.

A lover from 'The Ladies' Pocket Magazine'
Anne Elliot is entirely dependent on the Musgroves to re-introduce her to Captain Wentworth; to include her in the outing to Lyme; and on Lady Russell to take her to Bath. Lady Russell can travel where she likes, but then, she’s the widow of a well-to-do knight and has her own private carriage. Unmarried ladies, like Anne, have very little opportunity to be proactive.
Lastly, Jane’s other piece of advice to her niece is well-known but is worth repeating: You are now collecting your people delightfully, getting them exactly into such a spot as is the delight of my life; 3 or 4 Families in a Country Village is the very thing to work on… I hope when you have written a great deal more you will be equal to scratching out some of the past. The scene with Mrs Mellish, I should condemn; it is prosy & nothing to the purpose…. One does not care for girls till they are grown up. 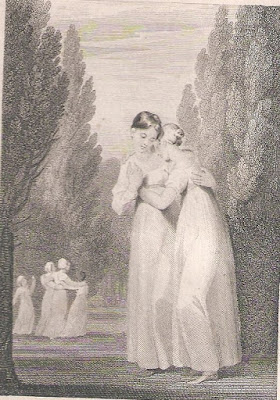 Frontispiece from 'Correspondence between a Mother and Daughter' by Ann Taylor, 1817
How many of us write scenes which we realize, in the cold light of morning, are ‘prosy & nothing to the purpose’. Another earlier comment: ‘till the heroine grows up, the fun must be imperfect’ is odd, considering that 1814 was the year when Mansfield Park came out, the only novel where Jane Austen shows us her heroine, Fanny, as a child.
Sadly, Anna did not fulfil her literary ambitions – apart from a couple of short stories and a novella published in the 1840s. A few months this exchange of letters with her aunt, she married the Reverend Benjamin Lefroy. He died in 1829 leaving her with seven children and very little money, which may explain why she abandoned Which is the Heroine? and later burnt it.
But we owe her a debt of gratitude for giving us a glimpse into how Jane Austen constructed her novels and what she thought was important.
Elizabeth Hawksley

What a great post! Yes indeed, I have certainly found scenes guilty of being prosy and to no purpose! It's so interesting to see how Jane Austen perfected her craft and was so attentive to detail. A lesson to us all.

I agree, Elizabeth. And Jane Austen had to work it all out for herself. OK, she enjoyed Fanny Burney's novels, amongst others, and was an admirer of Dr Johnson's writing but, all the same, the actual technique of writing a novel wasn't something she could find out about by reading a 'How to' book.

I was noticing, whilst I was writing the post, how cleverly she builds up to Jane Fairfax's arrival in 'Emma' - we hear about her long before we meet her - and Jane's quiet machinations to get herself to Highbury so that she can meet Frank Churchill is positively Machiavellian! 'Emma' is a very intricately-constructed novel. And Jane Austen must have sorted out how to do that on her own.

Thank you for this brilliant and captivating piece! Machiavellian is spot on too - every time I re-read Emma I delight again in the clues Miss Bates drops...

How nice to hear from you, Tanya. I'm always amused to see just how wrong Emma is about Mr Elton being interested in Harriet. Why is she so blind, I wonder.