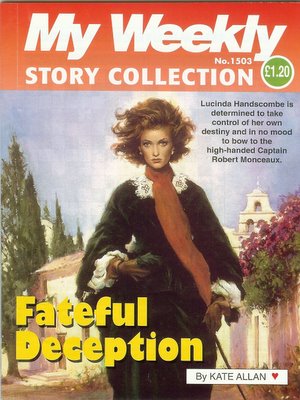 A new year and my first book as a sole author hits the shelves! I wrote Fateful Deception in 2002-3 and sold it in May 2004 so it seems a long time in the making. Originally titled A Notorious Deception, it was the second novel manuscript I completed. (The first, currently titled Journey to Love, is out as a My Weekly Story Collection paperback later this year). Fateful Deception is in WH Smith, Asda and other good newsagents this month (on the magazine stands).

It's an adventure following the story of an unknowing heiress Lucinda Handscombe who is being persued by two plotters wanting to marry her for her fortune. Dragoon captain Robert Monceaux rescues her from a supposed highway robbery and then finds himself increasingly unable to untangle himself from her affairs as she arouses his protective instincts and he finds himself falling in love with her. But will she think him simply another fortune-hunter?

The story begins in Hounslow, Middlesex, where I worked for a time. Hounslow Heath was notoriously dangerous for travellers but also a military training ground for troops stationed at Hounslow barracks. You can read more about the historical background to the story here.

And the first chapter is excerpted here.

The cover isn't Regency, looking at the fashion-sense of the lady depicted, and she looks more like she is standing in Italy rather than the rain and snow-laden Middlesex of 1810 - but us authors rarely get any say in our covers!
Posted by Kate Allan at 9:21 PM