A new dawn for the historical romance? 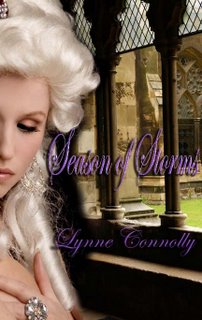 I have a new book coming out on the 15th February; “Season of Storms.” It’s Georgian set, but it represents a new departure for me. It’s a paranormal historical romance.
This is a book of my heart, one I really wanted to write, one of those ideas that takes you by the scruff of the neck in the middle of the night and keeps you awake.
When you think of the usual paranormal romance, you think of vampires, elves, even ghosts, but in this one I thought of the Greek Pantheon. You know, Zeus, Apollo and the rest. Since I love the Georgian era, I had a vision of Zeus, splendid in dark blue dull taffeta, striding into a ballroom and taking the ladies by storm.
Wow, I thought, and I started. I soon discovered that writing a being that was thousands of years old and making him tangible, believable, was way beyond my capabilities. What would such a being think, how would he feel? He would hardly be on our plane, wouldn’t care about the short-lived mortals who flitted through his existence like mayflies. So I devised a scheme. The gods were not the original Pantheon, but people who had inherited their attributes. Remember, each god has a special attribute, or series of them, so Zeus is a leader who can make thunderbolts and Artemis is a virgin huntress, one of the moon goddesses. But the gods can die, of starvation, or violence. They can’t die from old age and disease.
Thirty years before the start of “Season of Storms,” their old enemies of the gods, the Titans, caught up with the Olympian gods and set a trap, detonating an explosion that killed many of the old ones, the Ancients. The attributes migrated to the bodies of the nearest unborn children, so now they are scattered far and wide.
That’s where I started the story. And of course, where else would I start it but Bedlam?
Apart from inserting a few new beings into the Georgian scene, I’ve tried very hard to keep to the Georgian era as it was. I’ve not distorted history, nor have I changed the way things happened, or how people felt, any more than I do in my contemporary urban gothics.
While very exciting, it’s also scary.
Will it catch on? What do you think? Or will I have to give up writing more in the series?
Oh yes, and we’re hovering on a name for the whole series. The Pantheon, or The Olympians? What do you think?
Lynne Connolly, GSOLFOT
"Season of Storms" is coming out at Triskelion Publishing on February 15th
Posted by Historical Romance Author at 3:36 PM