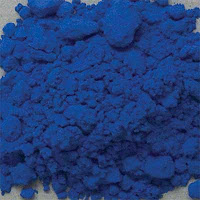 I've been researching pigments used by artists in the C18th. The glorious colour in the picture is called smalt. I'd never heard of it before. Originally developed in Saxony in the 1600s, it was an improved version of a colour called Blue Frit used by the ancient Egyptians both for painting and as a glaze. That had used copper as a colourant, whereas smalt mixed cobalt ore heated with silica (sand) to produce saffre, or zaffre. The zaffre was then sold to glass makers who mixed it with potash, put the blend into a furnace for twelve hours and stirred it every so often. Once it had dissolved and formed glass it was plunged into cold water to make it brittle, then ground, sieved, washed, and graded according to colour. The best and most expensive was a deep violet-blue, the cheapest a pale sky-blue.

Important in European oil painting during the 1500 and 1600s, smalt was the only pigment made from cobalt for 200 years. The miners digging out the ore believed there were spirits in the mines which they called "Kobalds". It was these spirits that gave cobalt its name.

The most expensive blue pigment ever created was the original Ultramarine. This was extracted from the stone lapis lazuli and was even more expensive than gold. In the Middle Ages the only source of lapis lazuli, which means simply 'blue stone', was Badakshan, now part of Afghanistan.

Prussian blue was discovered purely by accident in 1704/5. Heinrich Diesbach was working in his laboratory in Berlin trying to make a cochineal red lake. (Cochineal was originally obtained by grinding up the bodies of cochineal lice!) He mixed the necessary ingredients of iron sulphate and potash, but instead of the strong red he expected, the result was a very pale one. When he tried to concentrate it he got purple then a deep blue. Because the potash he'd used was contaminated with animal oil, (he'd bought it cheap to save money) Diesbach had managed to invent the world's first synthetic blue pigment.

Next time - Orpiment and massicote!

Jane Jackson.
Posted by Historical Romance Author at 8:30 AM

The smalt is beautiful. Do they still use it?

And do you have a picture of ultramarine?

I believe it has been replaced by a synthetic pigment which duplicates the colour but is far easier to work with. Because smalt is made from glass, the particles can't be ground as finely as other natural pigments. I don't have a picture of ultramarine at the moment, but watch this space!

Gorgeous, Jane. I do love this blog.

PS - does that mean your next book features an artist?

Jane said...
I have another to write before I can get to it, Jan. I'm thoroughly enjoying the research though, and have amassed enough for several books!

A fascinating post Jane! I think those of us who love to paint don't realise how lucky we are now-to be able to go into a shop and instantly buy any colour we like over the counter is a treat that artists in the past didn't have. I do wonder if our synthetic pigments are quite as beautiful as those from the past though-if you've ever seen a decorated medieval manuscript you'll know what I mean.

Fascinating topic! One of the reasons why I love coming back to this blog is the info you ladies keep coming up with.

Thank you for sharing it with us!