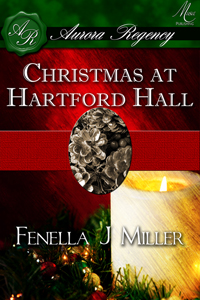 My latest book with Aurora/Musa was released on 2nd December. Here is a short extract for you to read. I've also included the 5* review - I think this is only the second one I've had with 5* Needless to say I'm delighted.
Elizabeth was lost in thought, recalling two Christmases ago when Grandfather had been well. From nowhere a horse reared up behind her. She had no chance to hurl herself to safety. Her last thought as she fell beneath the plunging feet was that she would be with her beloved relative at Christmas after all.
Her mouth was full of snow, her basket no longer in her possession, but she was not dead. She daren’t move. She was beneath a team of spirited horses. She could be trampled to death at any moment. Then two hands grasped her shoulders and she was hauled backwards through the snow in a most undignified manner and set firmly on her feet.
She spat the last of the white stuff from her mouth and glared up into the face of the most attractive man she’d ever seen in her life. He would have been even more handsome if he were not scowling back at her.
“What the devil were you thinking of? I could have killed you. Walking down the middle of a lane is the height of folly.”
This was the outside of enough. The wretched man had all but run her over and was now blaming her for his foolhardy actions. “That I am not dead is no thanks to you. Perhaps it has escaped your attention, sir, but the only place it is possible to walk at the moment is down the middle of the lane.”
He frowned down at her, his startlingly blue eyes unfriendly. “I do not intend to stand here bandying words with a servant girl, my cattle will freeze.” He raked her with an icy stare. “As you are obviously unhurt, I shall continue my journey.”
Good grief, what a ridiculous vehicle he was travelling in. She couldn’t help herself, her lips twitched and she hastily raised a hand to cover her smile. “I would think, sir, that driving in the depths of winter in that carriage might be considered even more foolish than my walking in the middle of the road.”
She thought he would suffer an apoplexy. His lips thinned and he seemed to grow several inches. Now he was even more formidable. His many-caped driving coat was snow-covered, his beaver equally whitened. If she thought of him as a rather cross snowman perhaps he would not seem so alarming.
Then his expression changed, his anger gone, and he smiled. My word! He was far more dangerous to her composure when he did this then when he glared at her.
“I beg your pardon, miss. The relief that you were not killed has made me behave appallingly. Although my carriage is not ideal, allow me to give you a ride to your destination. It’s the least I could do.”
Flustered by his mercurial change and not quite sure she wished to be squashed between him and his manservant so high from the ground, she shook her head vehemently. “No, it would be most improper. You continue your journey. I have not far to go; pray do not worry about me.”
Review Site: Got Historical Romance
Rating: 5.0
Reviewer Name: Desireé Frazier
Review:I fell in love with this story during the very first scene. It is a lovely take on the classic Cinderella tale set during Christmas time and although I normally like a longer story, so I can get to know the characters better, I did not feel slighted in the least! The characters are well thought out and while reading you will find yourself lost in the story, almost able to smell the garlands and the holly! It’s a quick read and from start to finish you will love this book!
Happy Christmas Fenella
Posted by Historical Romance Author at 8:59 AM

Splendidly Christmassy cover, Fenella! Hope it does well for you

Thanks, Jan. Musa seem to be an excellent concern - my last book did very well with them.

I read the short extract of your new book. It is very nice book. Best of luck for your book Aurora/Musa.. Keep it up

Thanks, Puja. Aurora/Musa do good covers and author's views are paramount.