Sleeping in a four-poster bed 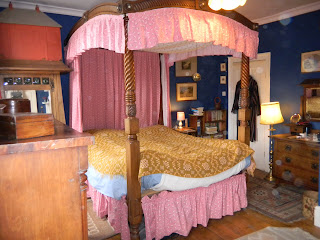 I am lucky enough to have inherited a four-poster bed. It dates from around 1850 and is 5 ft 6 ins wide, 6 ft 8 ins long, and nearly 8 ft high. Fortunately, my terraced 1820 house has high ceilings. Sleeping in it is like being on board a galleon – I have a canopy over my head and curtains like sails.

The oak roof frame has a walnut cornice elegantly curved and decorated on the outside and the two posts at the foot of the bed are also carved walnut. Walnut is a hard wood, difficult to carve and the barley sugar twists demonstrate that the bed, whilst not being of stately home status, was a classy one.

The whole bed comes apart (think IKEA 19th century style). The last time I moved it (from the first floor to the second floor), it took about four hours to dismantle and reassemble. The base oak timbers slot together neatly and are secured to the four upright posts by long bolts - with their own, specially-made screwdriver. When not in use, this hangs by a piece of string under the bed – as it has done for over 160 years. The bolt holes are cunningly hidden under small rectangular carved panels which you can lever out with a bent pin, and then push back into place.

The roof frame also slots together and there is a spike at the top of each post which the frame fits onto – this bit is fiddly (it’s 8 feet up) and usually entails a certain amount of cursing. Originally, it had a horse hair mattress. It was lumpy, the hairs came through the frayed 19th century ticking and it gave me asthma, so it had to go. I now have a comfortable modern mattress.

There are ten separate bed curtains: three roof pelmets, three valances to cover the legs, two side curtains, one head board curtain and the roof canopy. They are held up by either doweling or curtain wires. The annual wash, not to mention hanging everything back in the right place, is quite a chore – at least I have the benefit of a washing machine and a modern iron, unlike a 19th century housemaid.

It is also higher than most modern beds; the mattress is 2 ft 9 ins off the floor. When my daughter was little she wanted to live under the bed. It’s perfectly possible to crawl underneath and, doubtless, once upon a time, it would have housed a truckle bed for a servant or child. Nowadays, a number of suitcases, some boxes and my Christmas decorations live there.

I love sleeping in it, and I write whilst sitting comfortably propped up with a cushion against the headboard. And, of course, if I ever need to feature a bed in a novel (and which of us doesn’t!) then I only have to look at my wonderful four-poster for inspiration.

Elizabeth Hawksley
Posted by Historical Romance Author at 9:39 AM

You say you have a modern mattress on it now. Did you have to have it specially made?

No, though I should have done because the two foot posts stick into the mattress. It really needs a 4 inch square chunk out of the two bottom corners to accommodate them. The posts at the top are plainer and stick out less. Unfortunately, a specially-shaped mattress would have been very expensive.

You can probably see that the mattress at the bottom left-hand side of the photo is sticking up slightly.

I've learnt to ignore it!

Wonderful, Elizabeth, and it must give you lots of inspiration! No doubt on cold wintry nights you can keep out the draughts, too.

You are quite right, Sarah. When I first lived in my house, the wind whistled under the bedroom door but I,in my nice high bed, was warm and snug. Though I did spare a thought for any 19th century maid on a truckle bed right in the draught's path!

Very interesting, Elizabeth, especially about it being a hard wood, I hadn't thought of that. It shows how much we take for granted nowadays.

Thanks for sharing the fabulous information to the general public. We have the cleaning services in Sydney for the benefits of people at range able price. Our services are given below, please must visit…
Mattress Cleaning in Sydney
Curtain Cleaning in Sydney