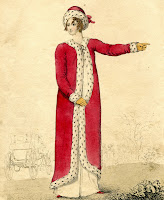 This Christmas I’m lucky enough to be plotting a Christmas novella for next
year and, as the hero is going to be snow-bound in the village alehouse, this has meant rather a lot of enjoyable research on festive drinks at the beginning of the 19th century!


The bell ringers from the church were apparently completely without discrimination in what they drank: one night before Christmas they would do the rounds of the village with a large bucket, knocking on every door and collecting – in the same bucket – whatever the householder chose to give them. Ale, beer, homemade wine, spirits all went into the brew which must have left them with the most dreadful headaches in the morning.
Much more appetising and excellent for cold weather, was Mulled Ale. To make this you take strong ale and bring it almost to the boil with soft brown sugar, cloves and spices to taste. When it is ready add 2oz rum or brandy per pint of ale. Serve hot with grated nutmeg and sliced toast on top. Quite a few recipes have toast added, possibly for the flavour, although it must have become rather soggy.
Another type of winter warmer involved eggs and was variously known as Ale Flip, Egg Flip or Yard of Flannel. To make this bring a quart of strong ale to the boil with nutmeg, lemon peel & ginger. Add 3 or 4 beaten eggs, 4 oz moist brown sugar and a double measure of brandy. Then pour the mixture back & forth between two vessels to produce a frothy head. Without brandy it was called Egg Hot and was considered suitable for children.
For New Year it was traditional to make a Wassail Bowl. Roasted apples were pulped with brown sugar, grated nutmeg, ginger and a quart of good strong ale. The mixture was heated until warm but not boiling and left to stand for three to four hours. 5oz of sherry were added for each quart of beer and, for a really rich version, eggs beaten in cream and a little spirit were stirred in before it was warmed up and drunk.
The lady at the top of the page is wearing the most wonderful Chrismassy "Hyde Park Carriage Dress" so although she has nothign to do with boozy drinks, I thought she was seasonal!
Have a wonderful Christmas and a Happy New Year!
Louise Allen
Posted by Historical Romance Author at 5:15 AM

Louise, I feel tipsy just reading those recipes. They sound delicious. Perhaps the toast performed the same function as peanuts or pretzels do now - something to soak up the alcohol?

Wow, I don't think I'd want anything out of that bucket! Expect they would have been warm though!

Great suggestion about the toast, Jane. Alison - I doubt they'd taste a thing after the first pint!

I'm rather taken with the lady's furred scarlet robe. She looks like a pregnant Mother Christmas (it's the way she's holding the sides together) or is she just wearing a particularly festive dressing-gown?