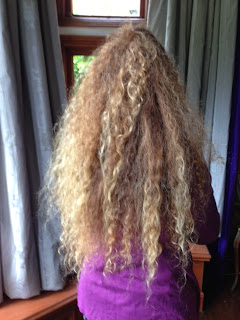 I absolutely love long hair – both on men and women - which is probably part of the reason why I write historicals.  But I have to admit that some of the hairstyles of the past have been less than flattering, which is why I never allow my heroes or heroines to follow hair fashions slavishly.  I prefer to let them be more natural.  And as for wearing wigs – no way!

Just the thought of my heroes having something so itchy (and probably full of lice) on their heads is seriously off-putting.  Imagine trying to run your fingers through it, only for the entire wig to end up in your hands while you’re left looking at a head full of stubble?  No thanks.

Everyone laughs at the “Roundheads” from the English Civil War, although in reality not all that many of them actually sported the so called “pudding bowl” hair cut.  On a battlefield, it would have been difficult to distinguish them from the Royalists as they mostly all had long hair.  Instead they’d wear some sort of token to show which side they were on.  I was very pleased when I came across that piece of information, because in my novel The Gilded Fan the hero has be on the Parliamentarian side (for various reasons) and I couldn’t imagine finding him handsome with his hair shorn just below his ears.  It’s just not a good look! 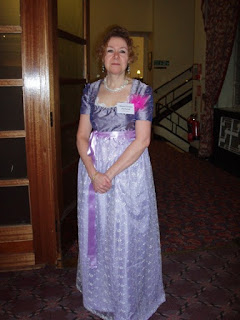 Women too, can get it wrong.  Take the Regency ladies, for example - Jane and Lizzy Bennett in the TV adaptation (yes, the one with Darcy in his wet shirt coming out of the lake) looked pretty enough.  Personally, I thought that whenever they let their hair down to brush it in the evenings it was so much nicer!  And having tried it myself a while back, for a Regency Day organised by the RNA, I have to say that an ordinary Regency hair do, with plaits close to the head and a little top knot, made me look at least ten years older, if not more!  I didn't like it at all.  If I ever dress up again, I’ll have to find a better style.

Long hair on men seems to be something readers either love or hate though – what do you think?  Love it or loathe it?

I used to have (moderately) long hair in my salad days.

God, I looked a pillock!!

Now, nature seems to have remedied the situation for me.

For what its worth, when men trade their partners in for a new model, they ALWAYS chose one with longer hair. Who's ever seen a trophy wife with a bob?

I hate long hair on myself (I look like a truck driver in drag), but on men, or rather, on the right man, it can look fabulous! But not too long, I think just touching the shoulders is long enough. Any longer and I start to think 'fetishist' (shades of 'Laurel K Hamilton syndrome')

I must admit, I think that long curly hair on men can look terrific. However, I agree with Jane, too long is a turn off - it's got to look kempt (as opposed to unkempt).

Unsurprisingly, having long hair myself, I like long hair on both women and men and with men, I think it started with my fascination with pirates, sailors and smugglers - a lot of them had long hair!

John - I'd love to see a photo of you with your moderately long hair! And I'd hate to have a bob even though it looks nice on other people :-)

Jane - yes, touching the shoulders is good, although I don't mind longer. Depends on the guy and the hair I think!

Elizabeth - but what about Prince Rupert! His hair was very long and curly!

Ah, Prince Rupert! My childhood hero and a man I still have a soft spot for. Different rules apply entirely....

I thought so Elizabeth :-) Now there was a nice-looking man ...

I have long hair. Sometimes it can be a lot of trouble, especially when it gets into a grape bunch of knots underneath. Yet, I'm still keeping it.
A scene in the P&P series has always annoyed me. Jane and Lizzie one evening are talking and are obviously drying their hair. Very strange. My mother never let my sisters or me wash our hair at night, saying it took so long to dry and so we would catch a cold. It takes about an hour (without a drier), even in front of heat. Now, I live in Australia, what would that be like in perpetually cold, rainy England? I can't see Mrs. Bennett letting them do it. Only colds caught while visiting allowed.