Ninfa: the most romantic garden in the world


My excuse for writing about the garden at Ninfa – which I was lucky enough to visit last week – is that it’s been called the most romantic garden in the world. It may well be true; I found it magical. 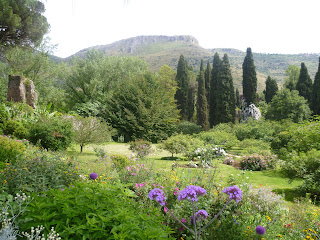 It wasn’t always so; Ninfa’s early history is violent and bloody. It’s first recorded in 750 AD when the Byzantine emperor Constantine V gave it to Pope Zacharias. It was strategically important in controlling the Appian Way and the coastal plain, which made it a target for 9th century Arab invaders. Subsequent popes fortified it and, by the middle ages, it was a walled city with towers, churches, and a castle. Two popes were crowned there: Pope Alexander III and the Anti-Pope Victor IV. The Holy Roman Emperor Frederick Barbarossa sacked it in 1171. 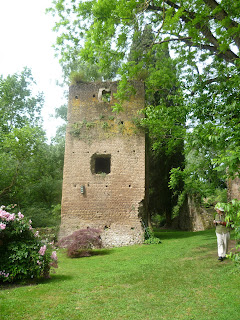 When the Arab threat receded, Ninfa changed hands again and was owned by a succession of powerful Roman families. Eventually, in 1298, it was bought by the Caetani. They were a quarrelsome lot and in 1382 a family feud led to a war which virtually destroyed the city. Somehow, it stumbled on for another two and a half centuries but, in 1680, it was abandoned, fell into ruin and was soon lost amid the vegetation.

Fast forward to 1920 when Gelasio Caetani decided to turn the ruined city into a garden. He began by restoring the castle and stripping excess vegetation from the half tumbled-down city walls, churches, and numerous towers built by various wealthy families. He rebuilt them just enough to make them safe, leaving them as romantic ruins and a haven for wild life. 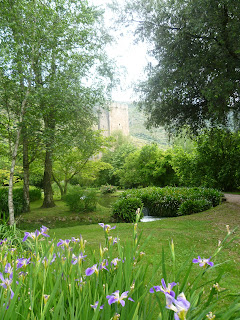 He brought in plants from all over the world and set about creating a garden like no other. The general impression is that it has grown organically. Wild flowers mix happily with exotic plants which move seamlessly from a stream with a Roman bridge, to a ruined church with fading mediaeval wall frescoes, to a bamboo wood. It is looked after by five gardeners – the jobs are hereditary being passed down to sons, and now, daughters.

Princess Lelia, the last of the Caetani, set up the Fondazione Roffredo Caetani to run Ninfa after her death, which it does, together with the World Wildlife Fund which looks after the 2000 acres of Nature Reserve. It is an organic eco-system which, with judicious tweaking, runs itself; for example, the fruit is left on the trees for the birds. As Estella, the curator’s wife who showed us round, said, ‘One barn owl can catch two thousand rodents a year’. She pointed to a nearby tower which was home to four species of owl. 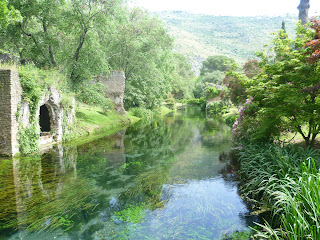 I thought Ninfa was absolutely wonderful. It delights the senses: everywhere you look is beautiful, and scent and bird song fill the air. I can understand why it’s called the most romantic garden in the world. I hope my photos give you some idea of how very special it is.

Posted by Historical Romance Author at 9:58 AM

It's beautiful, Elizabeth, thank you for posting it and telling us so much about Ninfa's fascinating history. So peaceful and tranquil now,and hard to imagine its exciting past!

it does look beautiful! Did you see Monty Don's Italian Gardens series? I think he featured Ninfa. He did an excellent job of placing each garden in context, and giving its history.

Thank you for your comments, Sarah/Melinda and Helena. I did see Monty Don's Ninfa programme. It certainly whetted my appetite to see the garden for myself.

Not only is it beautiful, it's also full of secluded arbours, secret corners in old towers and romantic walks amid dancing butterflies - all of which would make wonderful trysting places!