Revenge has formed the basis of stories for hundreds of years, from the blood-filled Jacobean revenge tragedies to modern day films, taking in opera and stage shows along the way. I love a good revenge story, although I know some readers are not so keen.  But one person's revenge could be another's justice, and justice for a wronged woman in the brutal Georgian era was hard to come by. 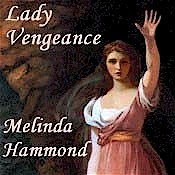 In my Melinda Hammond novel, LADY VENGEANCE, Elinor is wronged by a group of very powerful men. They take their cruel pleasure and think nothing more of it, but eight years later  their deeds come back to aunt them.  This is (so far) the darkest of my Melinda Hammond novels, and it is a stirring adventure story of politics and plots, dark deeds and love, and  a mysterious, fiery ruby - the bloodstone - which is Elinor's link with a past she cannot forget.

My latest Sarah Mallory, BOUGHT FOR REVENGE (published in August) is a very different revenge story.
It is set in the "enlightened" world of the Regency, two years after Waterloo and it is the man, Lucas Blackstone, who thinks he has been wronged and is determined to exact his own kind of justice.
However, he finds that plotting his revenge against an unseen, inhuman enemy is very different from carrying out his plans to harm a gentle old man and his beautiful daughter. All too soon Lucas finds the defensive walls he has built around his heart are beginning to crumble.

Anyone who has read my books will know I am a romantic, so in both stories it is love that wins the day, but  I did enjoy exploring these two scenarios with their very different heroines. I would love to hear which you prefer.

,
Posted by Historical Romance Author at 12:30 AM

Both heroines sound terrific, Melinda/Sarah. If I had to choose, I'd probably go for Elinor. There's something about a strong woman getting her well-deserved revenge on those who have wronged her which is very empowering.

Personally, I love a good revenge story, there is always so much conflict to be resolved. They both sound like must reads.

Thanks Elizabeth - They are both strong women, and although I loved Elinor for her fight for justice, I made sure Annabelle was equally strong in showing Lucas how wrong he was (boy did I make him suffer!)

Ann, thank you, you are so right about the conflict, and it makes the ending so much more satisfying, doesn't it?

They both sound great! For a revenge story to work for me, I need to believe that the wrong-doing was bad enough that revenge feels appropriate (at least as the story begins). I think I would go for the darker of the two, but that's just the mood I'm in right now. ;)

Thanks Barbara - both crimes are really horrendous. Like you, sometimes I want a gritty book, other times a light romance will do very nicely, thank you!