LOCAL INSPIRATION – HOW A SIMPLE STREET SIGN SPARKED A NOVEL


How can a humble street sign inspire a story?  Well, that is exactly what happened with my latest Sarah Mallory novel, a Regency Romance called Bought for Revenge, which was published on 1st August. 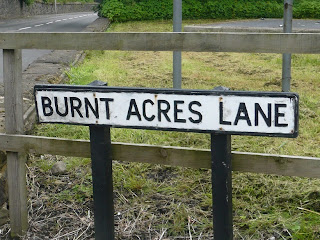 This sign is on a side lane off one of the main routes cutting east-west across the Southern Pennines. I drive past it regularly and it has always intrigued me. Burnt Acres Lane.  Did it once lead to a field where the stubble was regularly burned off, or was there perhaps a terrible fire?  So far I have not been able to find out any information about this area, but that hasn't stopped me from making up my own story! As I began to weave my own tale of what might have happened I remembered the  ruin of an old house a few miles away and the story really took off.

This house is called Holme Hall. It is just across the border in Lancashire and dates back to the middle ages, when it was a substantial manor house It was rebuilt in stone at the end of the 17th century and it is said to
be haunted (don't they say that of all old buildings?). It became a retirement home in the 1980s but closed at the beginning this century and suffered a devastating fire while it was standing empty and today is a ruined shell. However, I believe it has just been sold again, so I do hope that this wonderful old place can be brought to life again.

So, I had a house, and I had a working title for my new book - "Burnt Acres". I also decided to set the story itself here on the edge of the South Pennines, with its hills and moors and beautiful lush valleys. I have changed all the place names, but anyone living locally can probably recognise the location.

I began to plot the story of a dreadful house fire and a young man, Lucas Blackstone, who is determined to be revenged for the loss of his home and his family. Of course, all is not as it seems, and the innocent victim of his plans is my heroine, Annabelle. Before long Lucas finds that his growing attraction to Annabelle is a serious problem, since it seems he cannot have justice without ruining the woman he loves.
Annabelle is a very kind and gentle girl, but she has a quiet determination about her. She refuses to give in to Lucas and sparks fly in their battle of wills.

Bought for Revenge is one of my all-time favourite stories – so much so that I even re-read it when I received my author copies!  I do hope you enjoy it, too.

I enjoyed this post, Sarah. I love the way you throw a local field name and an impressively-ruined old house together and sprinkle a bit of your fantasy magic over it to make a terrific story.

Thanks Elizabeth. I think it comes from playing in the street as a child and making up adventures for us all to act out. A parked car was a boulder where we could hide from the baddies and a line in the tarmac was the edge of a ravine.... of course there was very little motor traffic then!