The Lady and the Laird - Scotland in the Regency Era 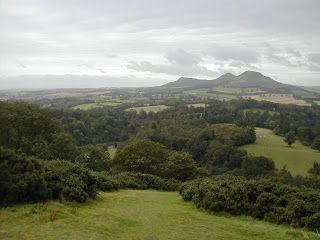 The first book in my new series, Scottish Brides, has just been published and I've found researching Regency Scotland so interesting. I thought I would share a few of my favourite pieces of research.

Scotland in the Regency period is a fascinating era in which to set a historical romance. Long gone are the days of medieval warfare against the English. By the early 19th century even the Jacobite uprisings, culminating in the Battle of Culloden of 1745, were sliding into the mists of time.

In the mid 18th century the Highland soldier had been feared and mistrusted, seen as a bloodthirsty rebel who should not be allowed to carry arms. Within 60 years this view had completely changed. During the Napoleonic Wars the Highland regiments of the British Army undertook some of the most courageous and fierce fighting of the campaigns, drawing on that legendary Scottish bravery, loyalty and unquenchable valour that had driven them forward through their tempestuous history. By 1815 there were 48 000 Highlanders in the British Army and 20 Highland regiments. They were the pride of the army.

The old bonds that had tied the Highland chieftains to their clans were under pressure long before the’45. From as early as the 17th century many of the estates were falling into debt. A search for profit started to take precedence over traditional responsibilities. When government improvement schemes and a growing demand for Highland produce led to a booming economy, some chiefs were determined to keep all the profits for themselves and increased their rents, in some cases by 500%. As a result many families left the Highlands to seek out a better life elsewhere.

In the first book of my new Scottish Brides series, the Lady and the Laird, the hero Robert Methven is determined to reverse this process of neglect, exploitation and emigration. Although the links of clan and chief might have been weakened by economic hardship, the loyal ties that bound family and kin could still be strong. Robert is a new breed of highland laird, a self-made man. Like many of his countrymen, Robert left Scotland to travel and trade in Canada, carving out a career as an explorer and making a fortune in the timber industry. Life for the Scots adventurers in Canada was incredibly dangerous but explorers such as Alexander Mackenzie and Simon Fraser became both rich and famous for their daring exploits. It was men such as these, whose portraits I saw in the Scottish Portrait Gallery in Edinburgh, who inspired my hero.

The ties of responsibility and kinship call Robert home when he inherits his ancestral estates. On Golden Isle, 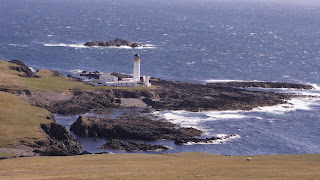 the land he holds in the far North of Scotland, he finds a community at war. I drew heavily on the history of the Shetland Islands for the book. French privateers were frequently seen in the waters to the west of the Shetlands and warning beacons would be lit in a chain across the islands when an enemy ship was sighted. Sometimes the pirates would raid the estates or threaten the lairds with the destruction of their lands if they did not give them supplies. In addition the British Navy was not above taking any man it could lay hands on into service via the violent press gangs. Sometimes the press gangs took boys as young as 14 into the Navy and left their families defenceless and destitute. It took a strong laird to keep his people together and protect them against the combined threat of enemies from overseas and the clearing of the land at home.

The lairds of the Northern and Western Isles had as much Viking blood as Highland blood, which is a pretty stirring combination. It embodies all the rugged individualism and determination that we look for in our heroes of Scottish romance. And although this is a time when claymores had gone out of fashion, your laird (and indeed his lady) would still be accessorised with a very handsome basket-hilted sword. Sword blades were often imported from Spain and Germany. Scottish sword smiths then added the hilts. The dirk was another essential for the well-armed highlander.

Speaking of accessories, highland dress, tartan, the plaid or kilt, had been one of the things that separated the Highlander from the “civilised” Lowlander. It was outlawed after Culloden and was not made legal again until 1782. Fortunately, by the end of the 18th century the Highlands were starting to be seen as wild and romantic rather than merely dangerous. In 1815 the Highland Society of London decided to collect tartans and identify them with the particular clans and tartan became an extremely fashionable fabric.

The visit of King George IV to Edinburgh in 1822 did much to increase Scotland’s popularity. It was the first visit by a reigning British monarch since 1650 and was orchestrated by Sir Walter Scott. Scott was determined that it would be a celebration of all things Scottish. He invited the clan chiefs to Edinburgh and specified that they should have an escort of Highlanders. The spectacle delighted the King and so the clan system with its tartan overtones was regenerated, at least in the popular imagination. 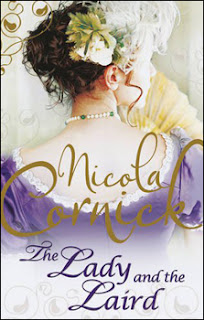 Finally a word about marriage… If you lived in Scotland, there was no need to run away to Gretna Green to wed, of course. Two major differences in the law between Scotland and England were that in Scotland the age of consent for marriage without the approval of a parent or guardian was 16 not 21 and there was no requirement for the reading of banns. It was thus a lot quicker and easier to marry in Scotland, which Robert and Lucy take full advantage of in the wedding of the Lady and the Laird. The US edition is on sale now and the UK one is out next month!

Posted by Nicola Cornick at 8:25 AM

What a terrific setting, Nicola! I've been to both the Orkneys and the Shetlands, They don't really do mountains - or trees - but they make up for it with spectacular cliffs, wonderful wild flowers in June and the Northern Lights!

Such fascinating history Nicola! I love hearing about anything and everything to do with the Jacobite Rebellion and the years following; there were certainly a lot of sweeping changes in the Highlands! Thanks for sharing and bringing it to life. I've just started reading 'Lady and the Laird' and am really looking forward to following Lucy and Robert's story :) I can't think of anything better to read than a Scottish Regency

Aren't they wonderful places to visit, Elizabeth? You certainly don't get the sort of mountains you have in the Highlands but as you say, they make up for it in other ways. It's quite strange going to a place that has so few trees - and the ones that are there are usually bent double by the wind!

Thanks so much, Jennifer! Scottish history is pretty fascinating all ways round, I think, whether it's the medieval period or the Jacobites or 19th century. I hope you enjoy The Lady and the Laird!

Great post, Nicola - and I can see that you have lots of scope for adventure in your books! Looking forward to reading them. I have a copy of John Prebble's The King's Jaunt on my bookshelf about George IVs visit to Scotland, so I will now have to read it!