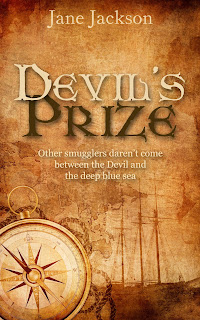 'Devil's Prize' is published today as an ebook and in paperback by Accent Press.

This quotation from Pericles gave me the key to Devlin 'Devil' Varcoe's  character:   Born in a tempest when my mother died, this world to me is like a lasting storm, whirling me from my friends.

Set in 1795 when smuggling and wrecking were an accepted way of life in Cornwall, this is a story of conflict, bloodshed, betrayal, extraordinary courage and the redeeming power of love.

High taxes, inequality between rich and poor,  and the government's lack of knowledge or interest in the problems of rural communities made smuggling and wrecking a means of survival for the Cornish.  But though the poor were sympathetic to the reasons for the French revolution, they did not support the violence or bloodshed.  There was also a long-standing relationship between Cornwall and Brittany regarding free trading which neither side wished to jeopardise.

The word wreckers is often taken to mean men who lured ships onto rocks by means of false lights etc. This may have happened. But in Cornwall, the term was more often, and more accurately used to describe the men and women who – after a ship had been driven ashore in a storm - stripped it.

Many wreckers were tin miners, poorly paid and thrown out of work without warning. As 1795 was a famine year many were starving and willing to risk their lives for anything they could sell in order to buy food for their families. When word of a wreck arrived, they – with their wives and children - grabbed axes, crowbars ropes and buckets or sacks and hurried to the shore to watch and wait.  Once a ship grounded it was considered fair game.  But before the plunder began, locals usually helped the terrified crew and passengers ashore.   It is a characteristic of the Cornish that when danger threatens they are willing to risk their own lives to save others, but once the danger is past they take the pragmatic view that it's only common sense to get what they can out of the situation.

If a ship was driven onto rocks at night, wreckers had to find their way down dangerous cliffs in the darkness with only the thin light of a lantern to guide their footsteps.  But they dared not wait until daylight because as word spread, more and more turned up hoping to retrieve something they could use or sell.

Even if the ship came ashore on a beach, they would still have to brave heavy waves to reach it.  Competition was fierce. Desperate people fought to grab whatever they could before someone else got it. An added pressure was the need to get the stolen goods away before the authorities arrived to put ship and cargo under guard.

If the ship was carrying spirits then death was inevitable. Fierce fighting broke out as barrels were smashed open and the brandy carried away in buckets, jars or chamber pots. Intoxicated men and women fell to their deaths, or succumbed to alcoholic poisoning and lay unconscious amid the wreckage, drowning as the tide rose.

After the cargo and everything moveable had been taken off, the ship was cut to pieces. The wood was kept; the brass, copper, furniture etc sold. This demolition was often completed between one tide and the next leaving nothing but an iron keel too heavy to carry away.