The Fun of Researching Project Darcy in Bath

I love walking in Jane Austen's footsteps when I'm in Bath, and love all the research involved in a new book. Tracking down buildings that Jane used in her novels is always fun and the last time I was in Bath, this proved to be no exception.
In Persuasion, Jane has a most romantic scene between Anne Elliot and Captain Wentworth when they meet in Molland's, the confectioner and coffee shop. I wanted to use Molland's in my new book, Project Darcy, and was really interested to find out where the real one was situated. The Bath directory for 1812 has the entry: Molland Mrs. Cook and Confectioner - 2 Milsom Street. Today, the shop is a well-known ladies shop - sadly, no longer selling sweet treats or serving ladies with hot drinks.

Inspiration struck at last and I found myself in Molland’s, the confectioner’s, where large groups of ladies and gentlemen were partaking of hot beverages. Inside, the air steamed with the smell of chocolate and coffee, warm cake and cold, fragrant ices. Displays of iced cakes, fashioned like temples with vases overflowing with sugar flowers, moulded into roses and pansies in pinks and lilac, graced a central table where everyone could stop and admire them. A box of marchpane might be the very thing and just suit my pocket, I thought, wandering to the display cabinet where sweetmeats were arranged on glass dishes, lit by oil lamps, making tiers of candied fruits sparkle in the light. I chose a selection of strawberries, plums, cherries and pears, which made a pretty picture in a box all tied up with a glossy green ribbon.- From Project Darcy

Jane Austen and her sister were in Bath with their mother during the winter months of November and December in 1797. They stayed with Jane's Aunt Leigh-Perrot in her house at number one, The Paragon. It's a very busy road these days but it's always exciting to discover the very places where Jane stayed. At the same time, the Lefroys, who were great friends of the Austens, were lodging in Edgar's Buildings. In Northanger Abbey, Jane has the Thorpe family staying there-not her most likeable characters, and I must say, I found this really intriguing! There's a record of Reverend Lefroy's subcription to Marshall's Library which was just opposite Edgar's Buildings at the top of Milsom Street. I discovered they were lodging at number 6, Edgar's Buildings, which is a pub and restaurant today. 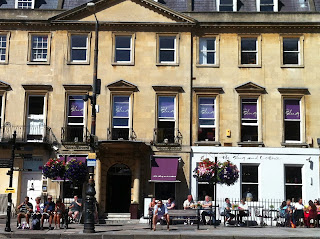 Inside, much is preserved as it was, and it's possible to go upstairs and see what would have been the drawing room. I couldn't help thinking that Jane would have visited her great friend here, as I stood at the window and looked at the famous view down Milsom Street, and it got me wondering if she'd met with someone else there too. 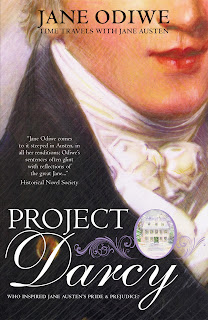 In 1805, Jane wrote a letter to her sister Cassandra and recalls a scene at a Riding House in 1797 when they'd gone to see Lucy Lefroy perform in a horse riding exhibition. She writes: This morning we have been to see Miss Chamberlaine look hot on horseback. Seven years and four months ago we went to the same riding-house to see Miss Lefroy's performance! What a different set are we now moving in! But seven years, I suppose, are enough to change every pore of one's skin and every feeling of one's mind.

Several scholars have wondered about this particular letter - it has been suggested by Claire Tomalin that Tom Lefroy was with his aunt and uncle at this time - did he and Jane meet again in Bath? Jane's noting exactly how much time has passed and the change in her feelings resonates so much with her novel, Persuasion.
More than seven years were gone since this little history of sorrowful interest had reached its close; and time had softened down much, perhaps nearly all of peculiar attachment to him ... No one had ever come within the Kellynch circle, who could bear a comparison with Frederick Wentworth, as he stood in her memory.
Well, whatever the case, it's certainly been inspiration enough for my new book, Project Darcy, which is now published on Amazon in both Kindle and paperback. Official launch is November 5th and I do hope you'll join me on that day at Austenprose where I shall be giving away a copy, and also on my blog for more prizes and treats during the week!
My inspiration has been both Jane Austen's first love affair with the dashing Irishman, Tom Lefroy, and the archaeological dig that took place at Steventon. I've two stories running side by side and crossing over in my new timeslip novel.

It is high summer when Ellie Bentley joins an archaeological dig at Jane Austen’s childhood home. She’s always had a talent for ‘seeing’ into the past and is not easily disturbed by her encounters with Mr Darcy’s ghost at the house where she’s staying. When Ellie travels into the past she discovers exactly what happened whilst Jane danced her way through the snowy winter of 1796 with her dashing Irish friend. As Steventon Rectory and all its characters come to life, Ellie discovers the true love story lost in Pride and Prejudice – a tale which has its own consequences for her future destiny, changing her life beyond imagination.

I do hope you'll join me to celebrate!
Jane Odiwe
Posted by Historical Romance Author at 9:04 AM

I thoroughly enjoyed this passage Jane. Thank you for sharing all these amazing facts. I get goosebumps when you tell us that you are walking in the very places Jane Austen herself had been. All so fascinating. I love Bath and will definitely visit all these places when I return ... One day ;) I can't wait for the release of your latest novel. It will be such a treat to read xox

Ps that was from Vee xox

Thank you, Vee-I'm so glad that you enjoyed it! I think Bath is a treasure trove when it comes to Jane Austen. I hope you enjoy my book-thanks again for your kind comments.

Thank you so much, Jane! The first time I went o Bath I delighted in walking down the streets mentioned by Jane Austen, especially in Northanger Abbey and in Persuasion (my favourite JA). I still get a thrill out of it! So to have help in identifying specific buildings, especially Molland's, is great.

PS I'm looking forward to your new book, which combines two things which really interest me (Tom Lefroy, and the archaeological dig).

Thank you, Helena-I'm so glad you enjoyed the post, and I hope you like my book-I had a lot of pleasure writing it.

I did enjoy this, Jane, particularly your description of the delights to be found in Molland's.

There's nothing like actually visiting a place. I remember timing myself to see exactly how long it took to walk the steep hill from the Pump Room up to the Assembly Rooms. In my novel, I'd allowed ten minutes. When I got home, I changed it to twenty minutes plus!