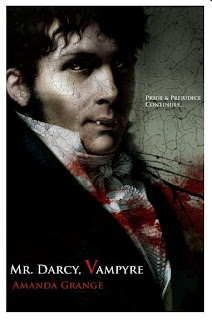 It’s Hallowe’en and what better time to talk about Mr Darcy, Vampyre? It came out in 2009 – hard to believe that’s 4 years ago! – and it’s my most controversial book. Love it or hate it, most people have a strong opinion. So what did you think of the book?

Here are my feelings:

When I wrote Mr Darcy, Vampyre I wanted to include the political, geographical and literary landscape of the early nineteenth century, so that I could set the characters firmly in their time. I decided to set the book on and Darcy’s honeymoon and send them travelling through during the Peace of Amiens, which was a brief calm in the middle of the Napoleonic wars.

To begin with, I thought I would reflect the literature of the time by having reading a Gothic novel and commenting on it from time to time. Books like The Mysteries of Udolpho by Mrs Radcliffe were huge bestsellers in their day and would naturally read them. But then I decided to go one step further and write Mr Darcy, Vampyre in the style of one of those novels.

The Gothic novels included a lot of travelling and there were lavish descriptions of the scenery. The characters visited places of great beauty as well as darker places with malevolent castles and other sinister locales. I incorporated this feature into Mr Darcy, Vampyre when the characters visit Mr Darcy’s uncle in his European castle:

Another flash of lightning lit the sky and revealed an eerie shape on the horizon, a silhouette of spires and turrets that rose from a rocky pinnacle. A castle, but not like those in , whose solid bulk sat heavily on the ground. It was a confection, a fragile thing, tall and thin and spindly. And then the sky darkened and it was lost to view.
The rain was coming down in earnest, drumming on the roof of the coach, and was glad when the gatehouse came in sight. The coachman held the horses and guided them over the last stretch of road. There was a pause at the gatehouse, and through the wind and the rain heard a shouted exchange between the coachman and the gatekeeper. Then the windlass creaked and the drawbridge was lowered, its chains clanking in the rain-sodden air before it settled with a dull thud on the reverberating ground.

In these dark and gloomy places, becomes less cheerful and confident. This fits in well with the Gothic heroines, who tended to cry and faint – unlike our modern heroines who are usually tough and kick-ass. I brought out ’s more vulnerable side, which is there in Pride and Prejudice but not seen as often as her brighter side. For example, in Pride and Prejudice, when learns that Mr Darcy was instrumental in separating Mr Bingley and Jane, “the agitation and tears which the subject occasioned, brought on a headache”. And when she hears that has eloped, “her knees trembled under her . .. she sat down, unable to support herself . . . she burst into tears.” When overwhelmed, often cries in Pride and Prejudice, particularly if she is away from home, and so in Mr Darcy, Vampyre I build on this less-seen side of her character.
The ending of Mr Darcy, Vampyre is probably the most talked about part of any one of my books. It’s undeniably strange, and again it’s based on the nineteenth century Gothic novels that Jane Austen herself read and enjoyed. The fashion was for deus ex machina endings, where everything was wrapped up very neatly and quickly. The phrase deus ex machina comes from the theatre: at the end of a play, the gods would descend from the heavens on a mechanical platform - deus ex machina means "gods from machines" in Latin -  and solve everyone’s tangled problems, as if by the wave of a wand. I used the device in Mr Darcy, Vampyre which can make it read strangely to modern eyes, but would have been accepted as normal in Jane Austen’s day.

The details of the ending were inspired by a very important literary work, The Fragment of a Novel by Lord Byron. This is the first vampyre story in print and the one that started the whole genre – everything from Dracula to Twilight owes a huge debt to this tiny fragment by the Bad Boy of the Regency, Lord Byron. The last few chapters of Mr Darcy, Vampyre are inspired by this section from Byron’s Fragment:

" 'On the ninth day of the month, at noon precisely (what month you please, but this must be the day), you must fling this ring into the salt springs which run into the Bay of Eleusis; the day after, at the same hour, you must repair to the ruins of the temple of Ceres, and wait one hour.'"

A ruined temple and a set of extraordinary instructions . . . anyone who has read Mr Darcy, Vampyre, will recognise these elements in the finale. If you haven’t read it yet, then Hallowe’en is a good time to do so. Because on one thing almost everyone is agreed: Mr Darcy makes a fantastic, brooding vampyre!