A Bride For the wicked Earl/ Linda Sole 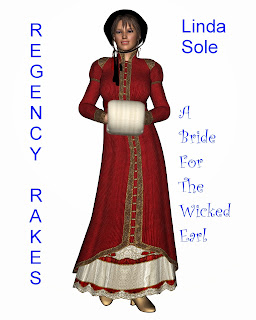 ‘Damn him to hell!’ Julian, newly created Earl of Larchester on his father’s death, swore softly as he heard the terms of the late earl’s will. ‘It’s where he deserves to burn for eternity for this.’

The young woman sitting just behind him, in the large drawing room, drew her breath sharply, causing Julian to turn and look at her, a mocking gaze in his cool blue eyes. He was a handsome devil, spoiled from birth by his doting mother and accustomed to having his own way, his dark hair softly waving back from a patrician forehead, his mouth deceptively soft and generous, but above all sensuous.

‘Don’t worry, Cressy,’ he drawled. ‘I have no intention of bowing to this iniquitous document. It cannot be legal. I am heir to Larchester and all that it entails, and even my father cannot stop me inheriting both the title and the estate.’

The elderly lawyer cleared his throat and looked uncomfortable as he peered over his gold-framed spectacles. ‘Forgive me, my lord,’ he said in a voice that trembled slightly. ‘The terms of your late father’s will apply to his personal fortune – and that he is at liberty to withhold if you refuse his last request.’

Julian scowled at the lawyer, his mouth becoming a thin line of anger. ‘How can this be? Are you telling me that all the money was his personal fortune? His fortune must have come from the estate. He has no right to withhold it from his heir.’

‘Forgive me, my lord,’ Mr Bartlet said. ‘I begged him to reconsider what he was doing but he would not. He said that you had defied him in life but would not do so in death. His money came from…I hate having to disclose this to you, my lord – but your father invested heavily in…textile mills in the north of the country, and that is where he made his money…’

‘He must have used money from the estate to begin the business and thus in law, the mills must form part of the estate…’

‘No, my lord. Your father more than repaid to the estate any money he may have used to set up his business empire – but he told me that it came from the prize money he received when he left the army after your grandfather’s death. As you may know, the estate was then on the brink of collapse; it was your father’s hard work that rescued it and due entirely to his efforts that you still have…’ Mr Bartlet’s words died on his lips as the new earl gave him a slaying look. ‘Forgive me. I know this is hard to accept, but you must marry within six months or your father’s personal fortune goes to his ward, Miss Cressida Harding.’

‘What if I refuse to accept it, or choose to give it to Julian?’ Cressy asked from behind him.

‘If you refuse the bequest it passes to a distant cousin of the late earl. You cannot pass the money to Lord Julian…unless you become his wife within the six months, of course.’

Julian cursed, stood up and moved to look out of the window. Without turning his head, he said, ‘That isn’t going to happen. Cressy wouldn’t have me – it would be a match made in hell for both of us. This is iniquitous!’ He turned to glare at the unfortunate lawyer. ‘Is there no way this can be broken, sir?’

Julian sent one of his father’s favourite Chinese porcelain vases smashing to the floor in his rage. How dare his father make such an outrageous will? They had quarrelled frequently in the years before Julian had left home to take up a life in the army. The late earl had cancelled his allowance, forcing him to manage on his pay as an officer and the competence left to him by his maternal grandfather. The late Lord Henry Larchester had vowed that he would bring his heir to heel, after Julian’s scandalous affair with the young wife of the late earl’s friend.

He could recall the mocking look in his father’s eyes the day they had parted.

‘You will be sorry for the disrespectful way you have behaved to me, Julian. Lord Brock was my oldest and dearest friend. You knew that – and yet you seduced his

Hope you enjoy this little taster. Love from Linda/Anne
Posted by Historical Romance Author at 11:19 AM