Face to Face With the Past

This isn't  about the Regency period, but I found it so fascinating that I thought you might like to share my experience of this amazing technique for bringing us face to face with people from the past.
Last week I spent the day at Manchester University on a study day with Professor John Prag and Richard Neve - the people who pioneered facial reconstruction as an archaeological tool in Britain. You have probably seen many of Richard Neve's reconstructions on TV archaeology shows and he was responsible for the reconstruction of the face of Philip of Macedon, father of Alexander the Great, Lindow Man and even King Midas (or possibly his father!) The photo below is of three people buried in one of the circle shaft graves at Mycenae. There were several groups within the burial and no suitable material for DNA testing. However the facial likenesses were enough to allow grouping into families. 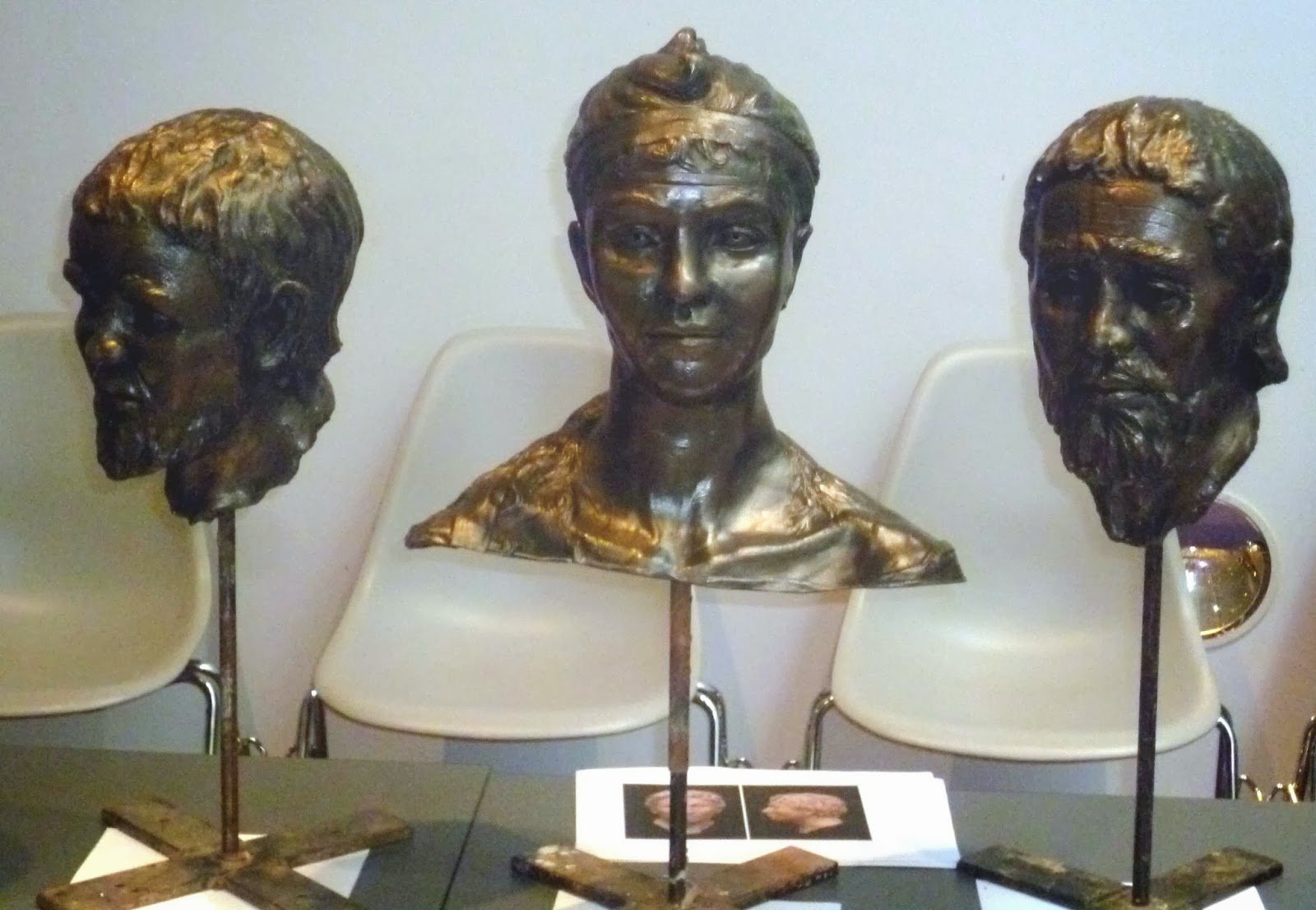 Before anyone reads further and is worried about any skulls in the photographs, they are all casts of original skulls which now can be produced by scanning the originals and then producing a plastic replica with 3D printing.

I was surprised that attempts at facial reconstruction go back to the late Victorian period, but apparently the First World War marked the end of work in this field and it was not picked up again until some Russian scientists tried it during the Cold War period, when information was not shared with the West.

In the early 1970s Manchester Unversity decided to unwrap one of the Egyptian mummies in its collection (coincidentally my father's dentist did the dental work on the mummy, the description of which did nothing to make my father's trips to the dentist less stressful!) and asked Richard Neve, a medical artist, to attempt to reconstruct the face. This was the start of the science in this country and the development of not only the techniques but also the vast database of measurements that enable the different layers of muscle, fat and skin to be acurately built up on faces of various ages. 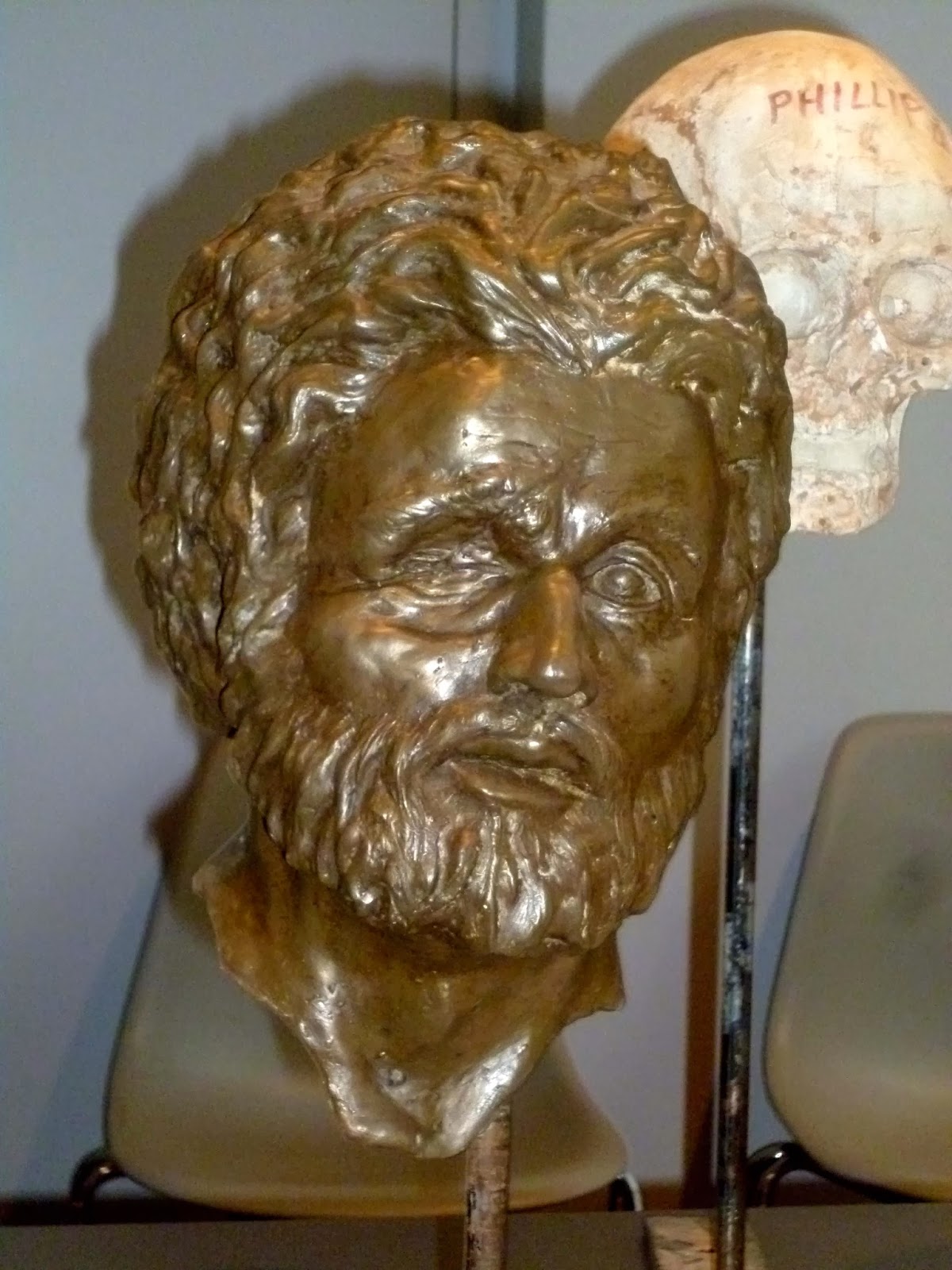 Richard Neve described the process as dissection in reverse and explained how, although the reconstruction can never perfectly reproduce the face of the real person, it will, if done properly, be biometrically correct and it is this that has enabled identifications to be done of crime and accident victims, even though details, such as hair style and colour and eye colour, are not known. 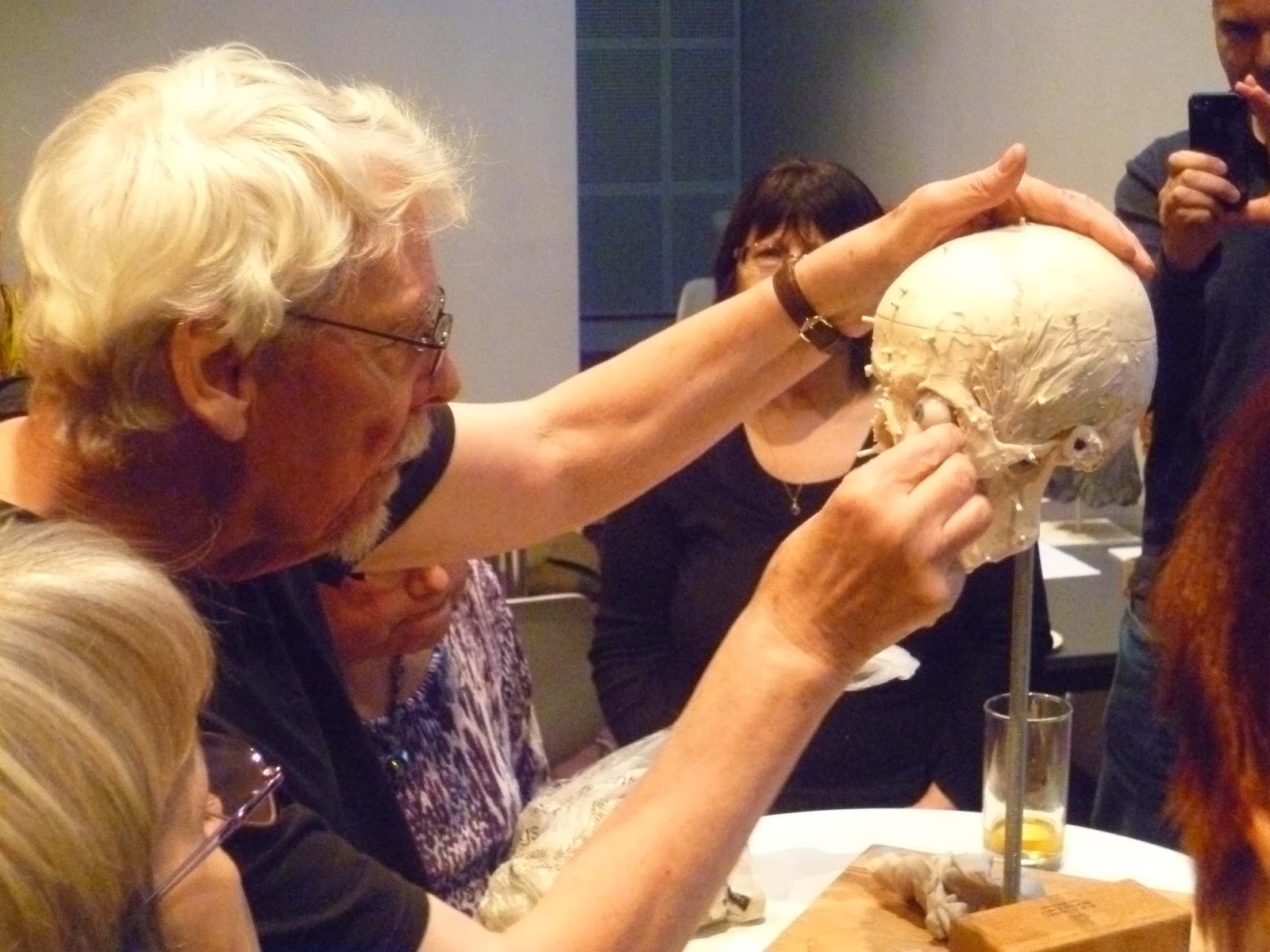 After the process and the science were explained and we saw images of past work we were introduced to some of the faces in wax, clay and resin: a spinge-tingling encounter! And finally Richard Neve worked on one half of a face so we could watch how he built up the structure from underlying tendons and muscles. We were grouped round, all of us prodding our own faces as we found for ourselves the underlying bone structures and distances that make the reconstructions possible. The tilt of the eyes, the presence or absence of a cleft in the chin, the width of the mouth and the spread of a nose are all there in the underlying bone. The only really difficult non-bony structure is the ear, apparently - no clues to size at all, although it is possible to tell whether they might have stuck out a lot.

Louise Allen
My latest novella - Seduced by Love - is available now to download from Amazon
Posted by Louise Allen at 6:00 AM

How absolutely fascinating, Louise. I know John Prag. He was the guide lecturer on a wonderful archaeological tour of the Aegean coast of Turkey I went on in 2011 starting at Istanbul and taking in Troy, Ephesus, Pergamon, etc., and ending up in Halicarnassus.

He was excellent company and very knowledgable. I can see that reconstructing ancient faces would be right up his street!

And I agree that one of the fascinations of the Regency period for us novelists, is trying to reconstruct the past.

I saw a TV programme years ago about reconstructing Philip of Macedon's face. At the end they had a life-size head complete with dark hair in a style to match contemporary artworks. It was incredibly realistic and I have never forgotten it.

It really is spooky watching the face develop from the skull outwards. One minute it loks like something from a horror film, the next you are looking at a real person.
Philip was particularly interesting because the damage to the skull was one of the ways they were able to identify the burial - it matched the ancient text's description of the accident, which he survived, amazingly.

I wish I had been there with you, Louise, it sounds like a wonderfully fascinating day! I love to see reconstructions of faces from the past - it makes you shiver :-)