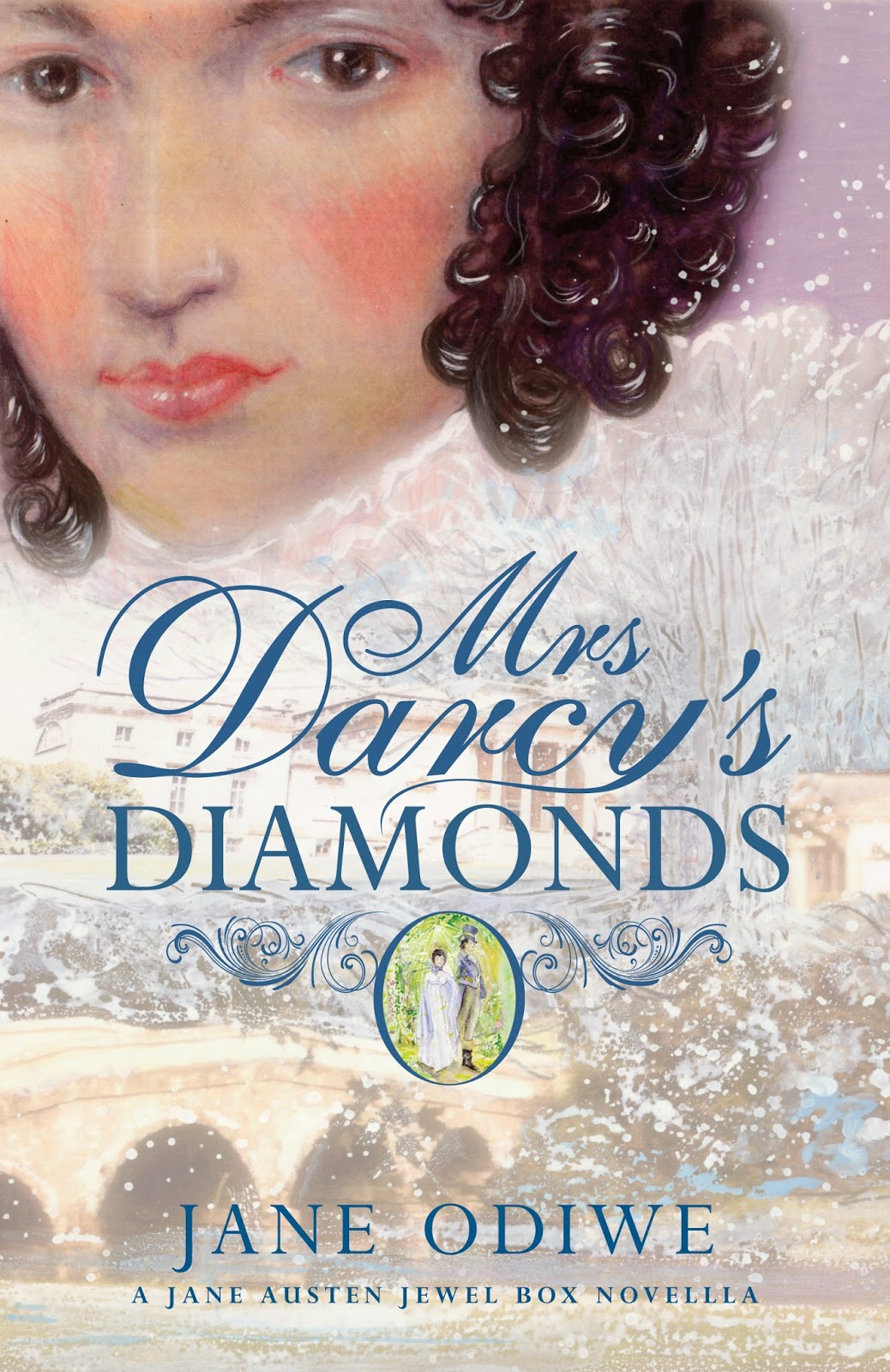 I've a new novella coming out on September 2nd - Mrs Darcy's Diamonds. It's the first of a new series of tales which have jewellery for their inspiration. I've been doing some research into my family history and discovered that on one side of my family were three generations of jewellers and silversmiths - now every time I see a piece of silver or jewellery made in Birmingham I can't help wondering if my ancestors had anything to do with its origins.
This first novella is also inspired by Pride and Prejudice - I've loved re-visiting all the characters from Jane Austen's wonderful novel and adding a few of my own. One of the really fun things I love to do is to find portraits which represent Elizabeth, Darcy, Mrs Bennet, etc. and a great way to do this is to put together a Pinterest board. I hope you'll take a look at the boards I've put together for some of my recent novels - I warn you, it's a highly addictive pastime once you make a start. I loved thinking about the jewellery, costumes, interiors and houses! 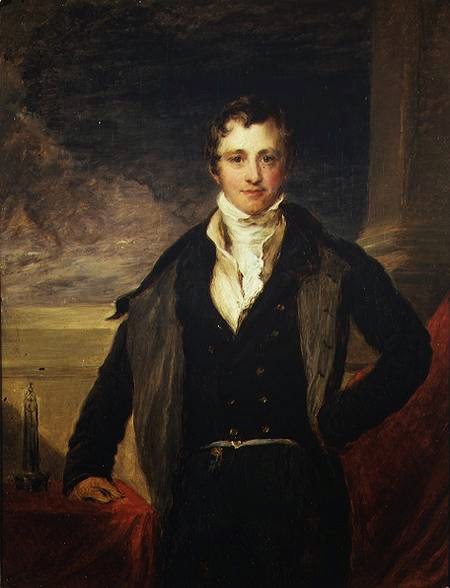 I love this portrait of Sir Humphry Davy- I think he makes quite a good Mr Darcy!

Here's a little blurb about Mrs Darcy's Diamonds:
Elizabeth is newly married to Fitzwilliam Darcy, the richest man in Derbyshire, owner of a vast estate, and master of Pemberley House. Her new role is daunting at first, and having to deal with Mr Darcy’s aunt, Lady Catherine de Bourgh, is a daily challenge. But, Elizabeth is deeply in love and determined to rise to every test and trial she is forced to endure. When her husband presents her with a diamond ring, part of the precious and irreplaceable Darcy suite of jewels, she feels not only honoured and secure in her husband’s love, but also ready to accept her new responsibilities and position. Mrs Darcy knows she will face exacting scrutiny at the approaching Christmas Ball, but it will be her chance to prove that she is a worthy mistress, and she is excited to be playing hostess to the Bennets, the Bingleys, and the gentry families of Derbyshire, as well as Mr Darcy’s French cousins. Antoine de Valois and his sister Louise have arrived at the invitation of Lady Catherine de Bourgh and Elizabeth is delighted that this young and lively couple are helping to bring Miss Georgiana Darcy out of her shell. However, when her ring goes missing before the ball, Elizabeth is distraught, and her dilemma further increased by the threat of a scandal that appears to involve the French cousins.

Here's the first chapter-I hope you enjoy it!

‘My dear, you are determined to vex me at every turn,’ said Mrs Bennet to her husband on the day before they were to travel to Pemberley House in Derbyshire. ‘I simply must know your opinion.’
Mr Bennet exhaled deeply from behind his newspaper. He preferred breakfast to be a quiet affair, but why he still had an expectation for such a fancy he had no idea. For the last four and twenty years he had listened to Mrs Bennet’s unceasing prattling, chittering, twittering and chatting. He considered that breaking his fast would have been a quieter occasion had he sat in Meryton High Street as the militia marched by with a full military band blaring the songs of the day. He looked coyly round the edge of his newspaper to see Mrs Bennet arrayed in a bandbox of jewels from a sparkling diadem on her head to several rows of necklaces around her neck and layers of bracelets jangling on her wrists.
‘I cannot help thinking that such old-fashioned jewels will be out of place at Pemberley,’ whined Mrs Bennet, ‘and I cannot decide which to wear for the ball. Ought I to wear the cut-steel or the diamond paste? Of course, Lizzy will be wearing the real thing - no paste for her!’
‘My father made the purchase of the cut-steel for my grandmother. They were made by Mr Matthew Boulton himself, were considered most desirable at the time and came all the way from the exotic midlands.’
‘Exotic! What are you talking about, my dear? I never heard Birmingham called anything so fanciful in my life.’ Mrs Bennet caught her husband’s expression and knew she ought to temper her outbursts. ‘Cut-steel is very pretty, to be sure, by candlelight, but I am afraid I shall look like a country bumpkin with neither taste nor fashion. Besides, I am to wear a very fine gown - Lizzy sent the silk herself - and I do want to look my best.’
Mr Bennet’s expression softened. Just occasionally, he saw a glimpse of the girl he’d married, the beauty who had stolen his heart. But he loved to tease.
‘Then the diamond paste will set you off a treat!’ he declared, quickly retreating behind his paper.
Upstairs, Miss Kitty Bennet heard all that was going on below with some amusement. She’d escaped the dining parlour as soon as she could, knowing what was about to transpire. Her own feelings about the coming ball were those of great excitement, spoiled only by the knowledge that her sister Lydia was not to share the momentous occasion. Pulling out Lydia’s last letter, she reread every word. At least Lydia did not seem so very upset that she’d been snubbed or at least, that was the impression she was trying very hard to give.

I know, Kitty dearest, that if Elizabeth were to have her way, she would have invited us, I am certain of it! Mr Darcy has NEVER liked my beloved Wickham, and if we’ve been snubbed, it’s HIS doing. Neglecting a sister will forever be on HIS conscience, if he has one, which I doubt. He can keep his WRETCHED ball - in any case, I daresay it will be a stuffed shirt sort of affair. I shall think of you all when I am surrounded by the handsome beaux of Newcastle on Saturday night at the assembly. Major Armstrong declared last week he has never seen such loveliness gracing the dance floor, and little Pickersnick, Wickie’s right-hand man, has quite stolen my heart. I never thought I should find another to take the place of Denny for flattering with ‘passione d’amore’ but he is the sweetest, most attentive little lap dog. He blushes as scarlet as his coat whenever I look his way, and he is willing to do just anything I ask - even delivering my little notes to Captain Webb who is the most good-looking man of my acquaintance, and I declare, quite in love with me.

Kitty put the letter away. Perhaps Lydia was not as sanguine as she tried to make out. She would have loved her sister to be with her at the ball - try as she might, she knew it just wouldn’t be as much fun without Lydia poking fun at all the Pemberley guests. Still, she was very pleased with her new gown and she couldn’t wait to wear it. It was laid on Lydia’s old bed - stiff, glazed muslin with a peach underskirt, the gown was embroidered on the hem and around the neckline. Her first really grown-up dress, a present from Elizabeth who knew her taste exactly. Lizzy had sent some muslin for sister Mary too, not that she was interested in clothes at all. Kitty decided Mary might have been more excited if she’d been sent a pile of books.

They were to travel to Pemberley that very morning and after stopping just one night at an inn along the way, they would arrive at their destination the following afternoon. The Longbourn servants were already running hither and thither whilst Mrs Bennet emerged from the breakfast parlour flapping her arms like a demented bird, barking instructions, scolding her daughters and generally not being very useful to anyone. Mr Bennet disappeared into his favourite room and escaped into a book, ignoring the sounds without, until summoned that the carriage was ready.
‘Well, my dears, can there be anything more exciting than the prospect before us?’ said Mrs Bennet, settling herself in the coach, arranging cushions behind her head and swaddling wraps around her knees to keep out the cold. ‘Just think, with good luck we may be attending two more weddings on our return.’
‘How so, Mrs Bennet?’ her husband queried.
‘Mary and Kitty, of course.’
Mr Bennet beamed at his daughters sitting opposite. ‘Whose weddings are you gracing with your presence, my dears?’
‘Oh, Mr Bennet!’ His wife looked at him in exasperation. ‘I am talking of their weddings - how can you be so obtuse?’
‘Are they engaged? Congratulations, Mary, congratulations Kitty - and all arranged without any inconvenience to myself. Mrs Bennet, I declare you are England’s greatest matchmaker.’
‘I declare you enjoy vexing me on purpose,’ Mrs Bennet replied, clamping her lips together and pointedly staring out of the window as they passed through Meryton and out onto the open road.
Mr Bennet merely winked at his daughters, opened his book and promptly fell asleep.