I expect that we all have a mental image of Fitzwilliam Darcy and Elizabeth Bennett in our head – but have we gained these from reading the book or from the many Pride & Prejudice film, TV adaptations and variations we have seen over the years? Jane did not include any clues to colouring and looks in her book other than mentioning that her characters were handsome, or that they had magnificent eyes. My most recent Regency, "The Duke and the Vicar's Daughter", has an image of a Regency gentleman on the cover who could be Darcy. I always imagine him as being the traditionally tall, dark and handsome and Bingley as being more slender and fair haired, Elizabeth as a brunette with hazel eyes, Jane and Lydia as blondes, Kitty dark haired and Mary as mouse. Georgiana, I would imagine, would look like her brother– so therefore dark haired and striking.

My Jane Austen retailing, Miss Bennet & Mr Bingley, has Jane on the front as I imagined her. I am writing a ghost story set at Pemberley with Kitty and Georgiana as the main protagonists, although Darcy and Lizzy also take centre stage, plus the obligatory handsome hero for Kitty to fall in love with. He, as most of my heroes are, is of a similar style to Fitzwilliam. When writing a Regency I have to admit that Sean Bean, as the character Richard Sharpe from Bernard Cornwall's fantastic series of novels, is my ideal. That said, I rarely have a fair haired hero, but I always have the delectable Sean Bean in mind when I'm writing – although nowadays Richard Armitage has replaced him as my gentleman of choice. 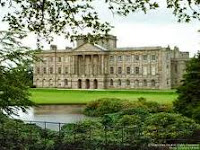 I have read that Jane Austen used Chatsworth house as her model for Pemberley – I think that Sudbury House was used in one of the TV adaptations, but I prefer the one used in Lost in Austen – Harewood House - for Pemberley. This is my favourite.

Strangely enough I don't visualise Darcy as Colin Firth - although no doubt millions of women do! I should be interested to hear if my imaginings for the characters in Pride & Prejudice are the same as yours. Fenella J Miller
Posted by Fenella J Miller at 10:56 AM

I think for me, Darcy looks more like David Rintoul. Someone smooth and superior. Maybe Toby Stevens, at a stretch, at his most aristocratic.
I've never seen Jimmy Thomas (the model on your cover) as Darcy. He's too rugged, and too, well, big. But he might be the perfect image for your duke!
I have four "Jimmy" covers (Red Shadow, Beauty of Sunset, Disposessed and Sunshine on Chrome) and he manages a different look, but very different to your duke!

Lynne, perhaps he is a bit too rugged. The actor who played Darcy in Lost in Austen was very good - dreadful hair -but otherwise exactly right. The man chosen as Darcy in Darcy and the Vampires is totally wrong!!