I love glimpsing how things must have been in the past and the new exhibition Royal Childhood in the Buckingham Palace State Rooms does just that. Toys so often get broken and children’s clothes wear out, so it’s fascinating to see these rare things from royal childhoods going back 250 years. 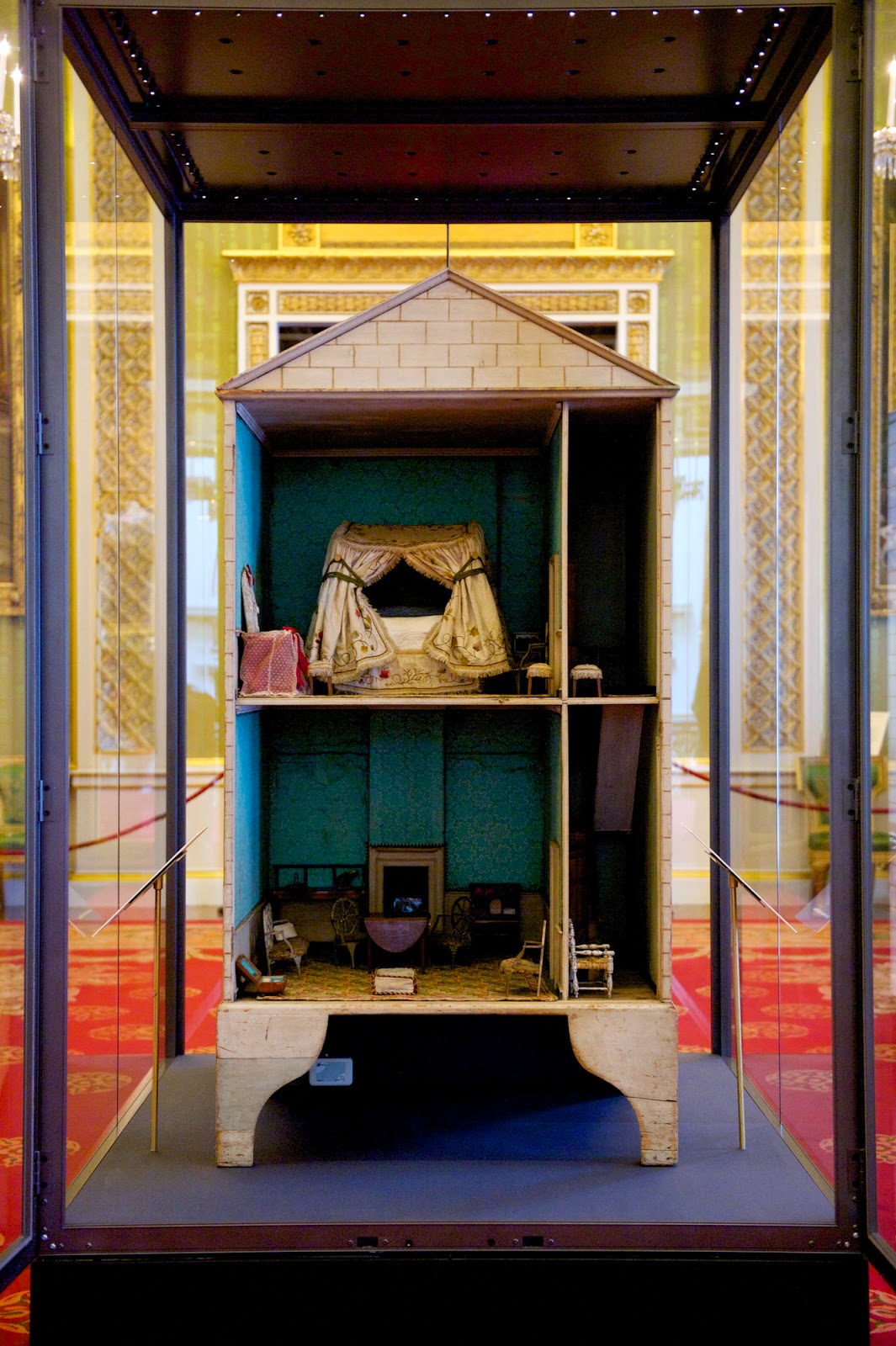 The exhibition opens with a doll’s house from the 1780s made for George III’s daughters by the carpenter on the royal yacht. The workmanship is a touch rough and ready - it looks as though he probably made the four poster bed and the furniture, too. George III had six daughters: Charlotte, Augusta, Elizabeth, Mary, Sophia and Amelia, and the doll’s house is large enough for several princesses to play side by side without squabbling. You can tell that it was much-played-with.

Toys are, by their very nature ephemeral, so perhaps it’s not surprising that there are no toys belonging to Queen Victoria’s sons. Doubtless, by the time they had been fought over by Princes Albert Edward, Alfred, Arthur and eventually Leopold, they would have been considerably the worse for wear. 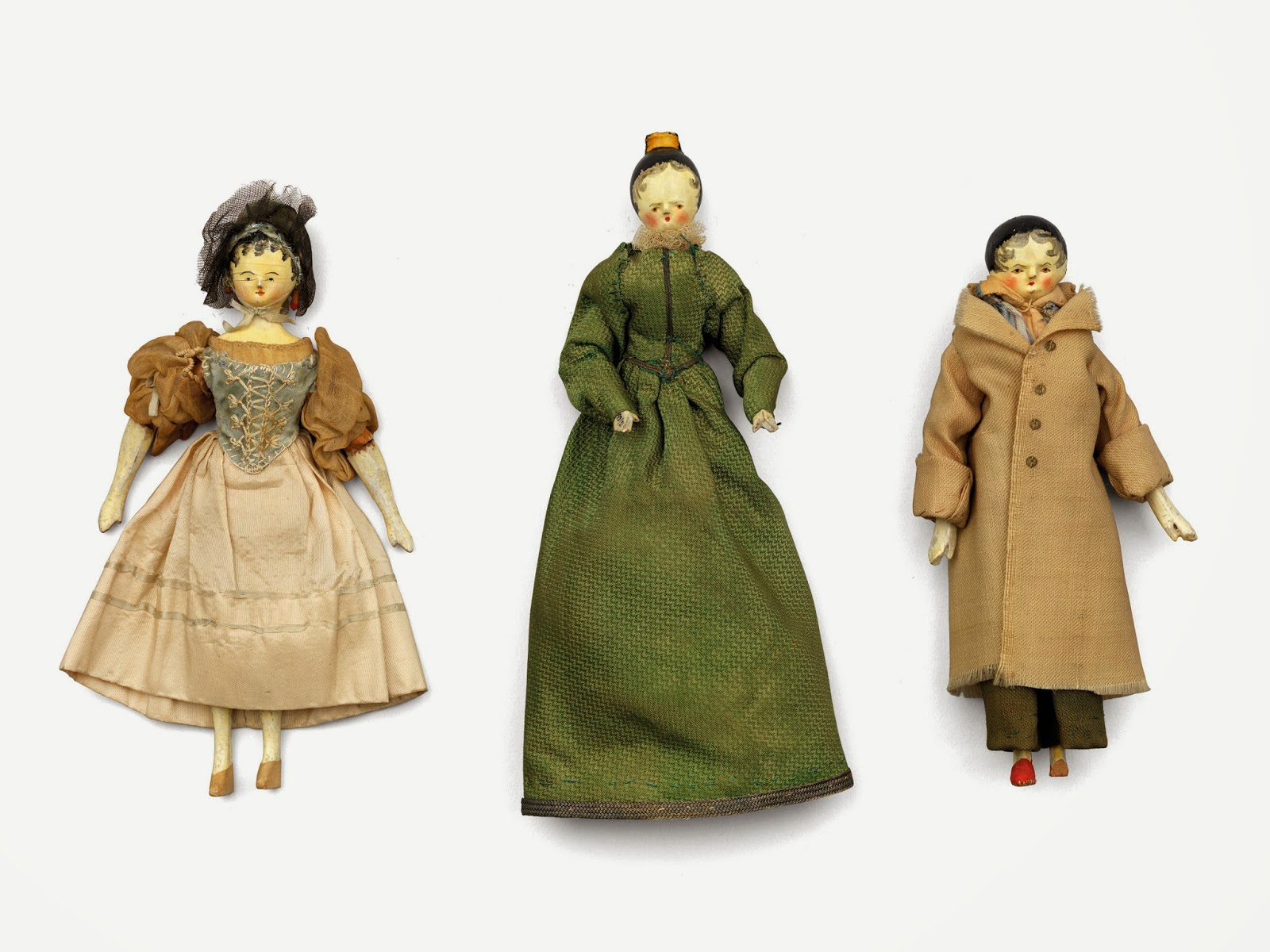 However, there is a selection of Queen Victoria’s home-made wooden dolls, dressed by herself as characters from ballets or operas she’d enjoyed – including the ballet dancer, Maria Taglioni. I found them rather poignant; they speak of a lonely childhood with few other children to play with. Still, I hope that she enjoyed talking about the shows she’d seen with her governess, Lehzen, and discussing how to dress the newest doll.

When Princess Victoria was fourteen, all her dolls were wrapped up carefully and put away; perhaps she felt her childhood was at an end and she must now move on to more adult things. 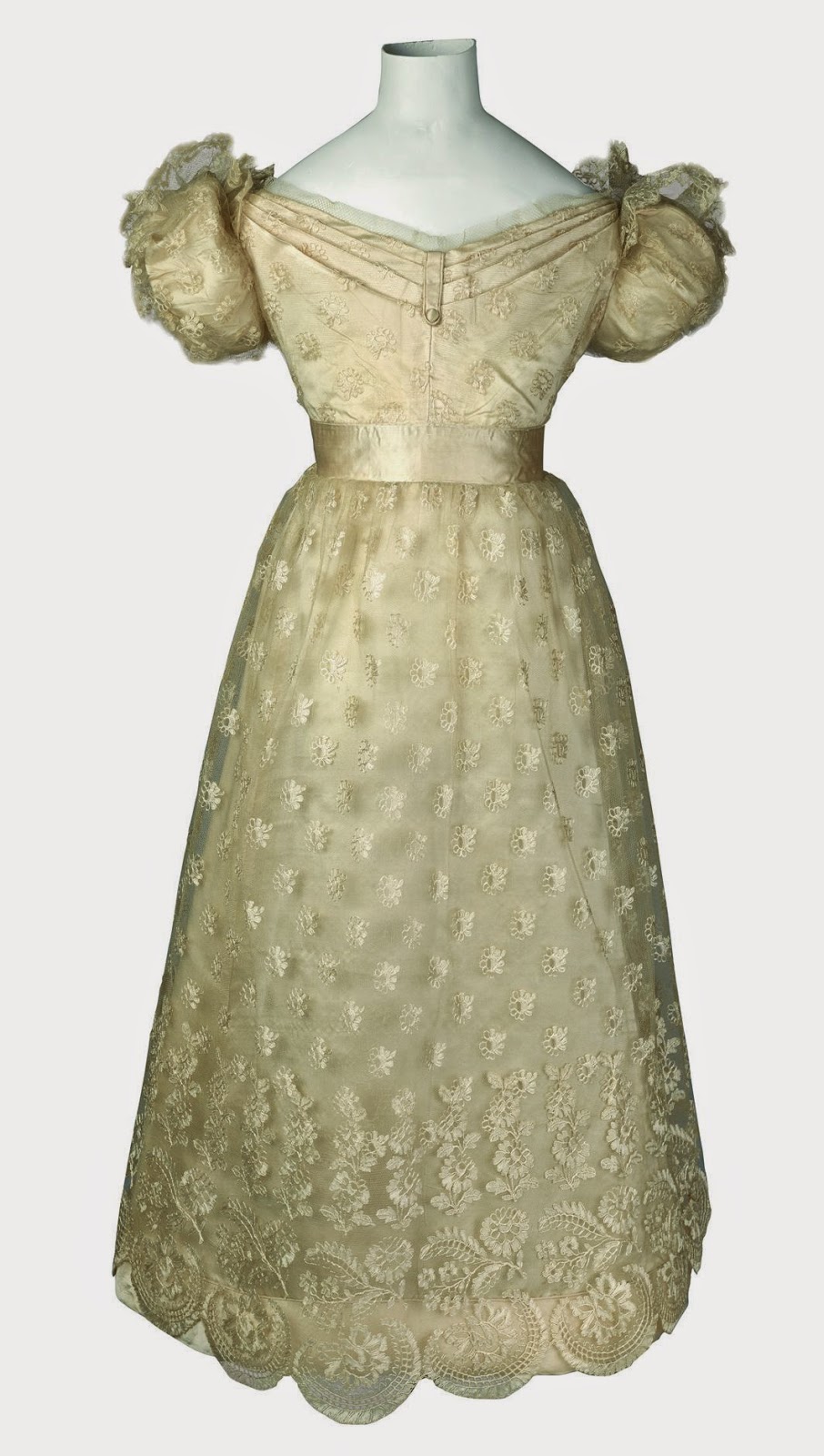 If nineteenth century royal toys are in short supply, there are some fascinating clothes. There’s a very pretty ‘blonde’ dress belonging to the young Princess Victoria, for example. ‘Blonde’, that is blonde lace, first appeared in France in 1755. It was a silk lace of two threads, twisted and formed into hexagonal meshes. The princess’s dress was obviously made for a special occasion and, in fact, it looks very like the illustration of a bridal dress in The Weekly Belle Assemblée from April 1835, also described as made of blonde lace. 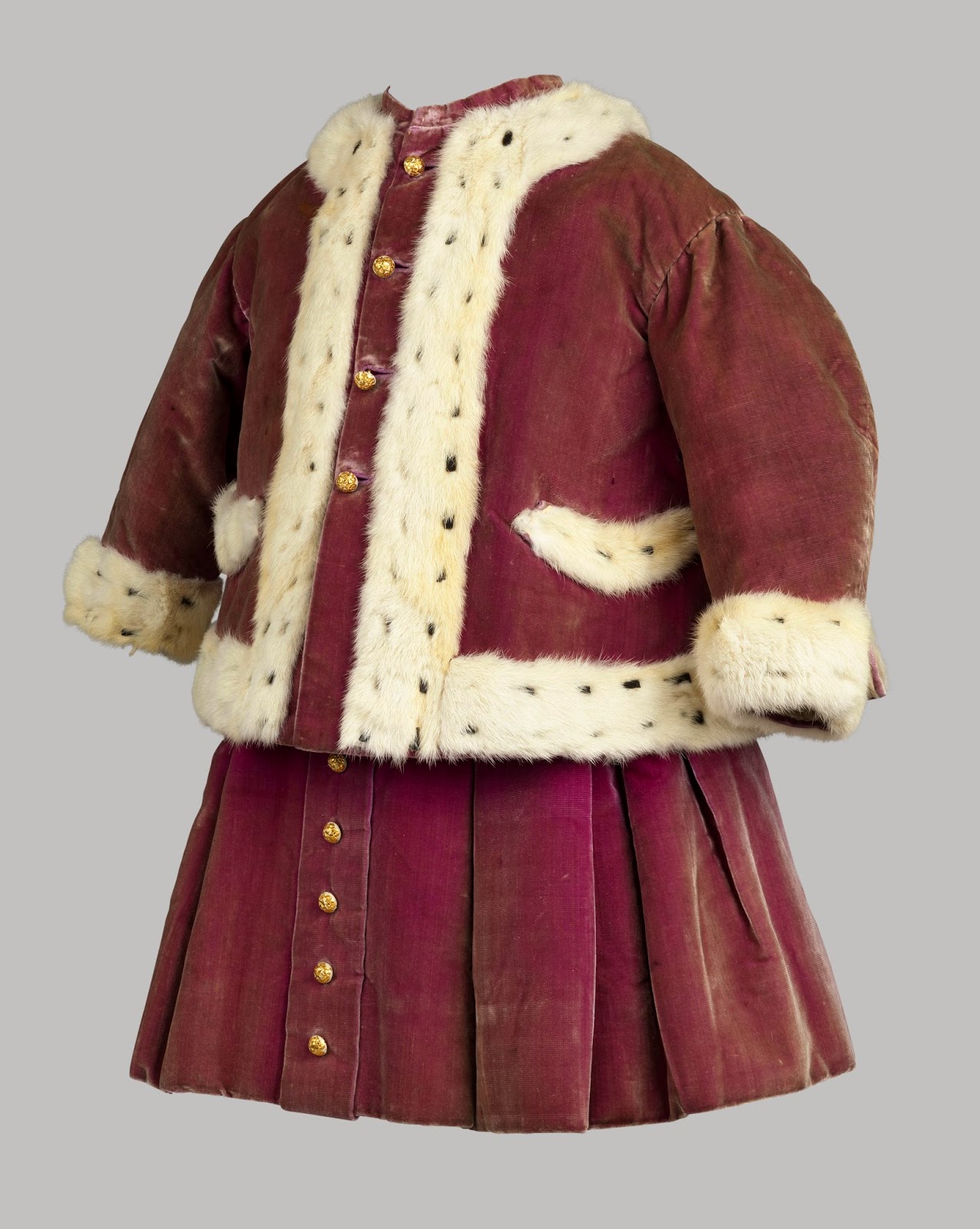 There is a red walking suit which belonged to the infant George V, dating from 1867-8. Small boys were dressed as girls until they were five or six years old. Then came the big day when they were ‘breeched’. After that, they wore a ‘skeleton suit’ until the 1830s, followed by a ‘tunic suit’ until sailor suits became fashionable in about 1870.

I was very taken with a row of tiny first shoes dating from the 1840s on. You can see that there was no difference between right and left feet; that innovation came in after c.1870. 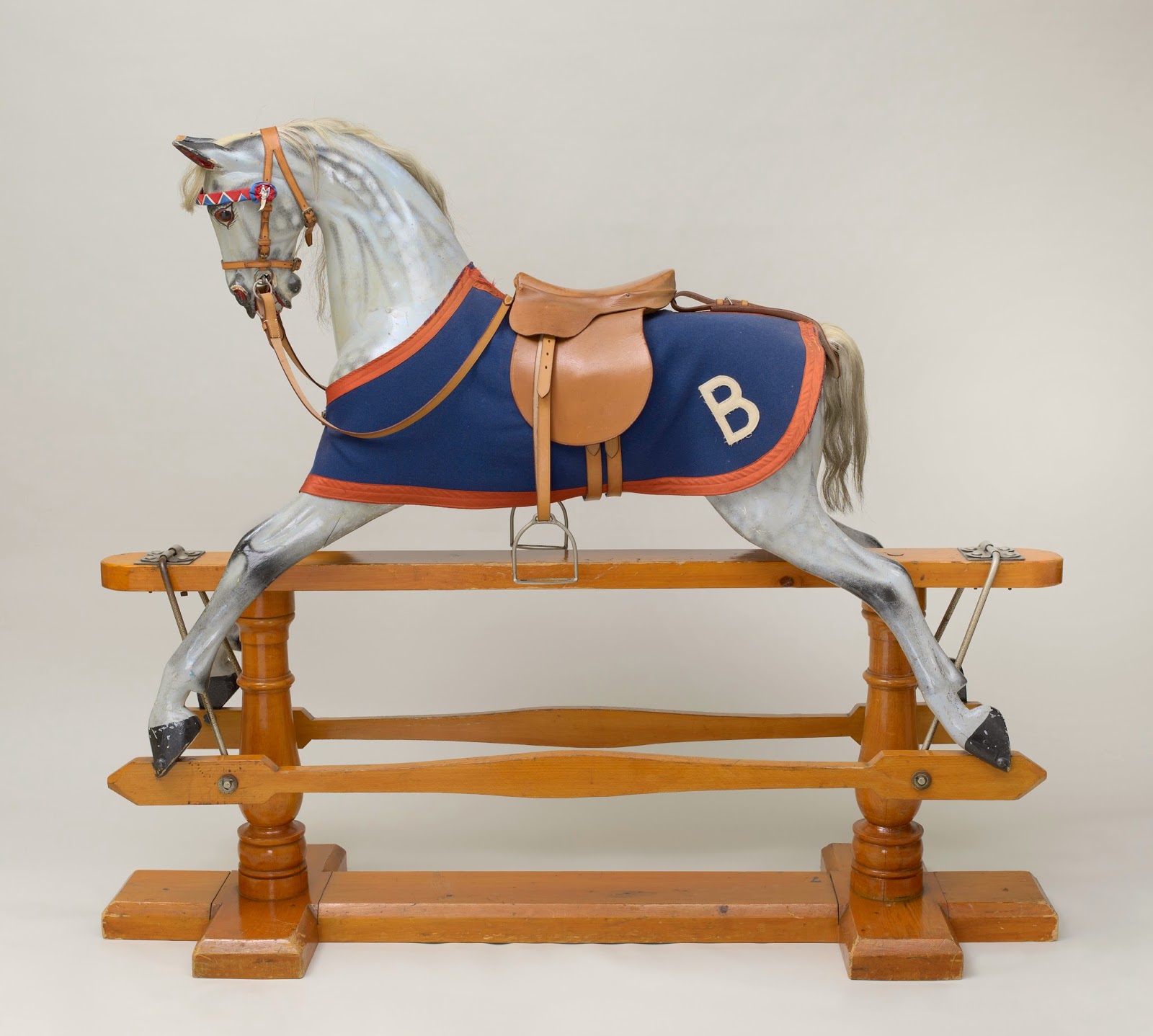 I have chosen to concentrate on the earlier objects on display – this is the Historical Romance blog, after all! But there are plenty of toys, exercise books, clothes, photographs and films from the 20th century to enjoy, too. I particularly liked the young Princess Elizabeth’s rocking horse from the 1930s.

Thank you for sharing this with us, Elizabeth. For those who cannot get to the exhibition it is lovely to be able to enjoy it through your post.

Any idea what the "B" stands for on the rocking horse's saddle cloth? Beth, maybe?

Thank you for your comments, Melinda/Sarah. I think the B stands for the horse's name. The princess's initials are on the bridle.

My invitation to the Bloggers' Breakfast at Buckingham Palace for the exhibtion's preview came out of the blue. I'm immensely grateful. I think the very least I can do is to share the delights with you all.

I wish I could have shared the delicious cakes we were offered, too. They were scrumptious!

Cake, too - how wonderful, even at breakfast :-)

Thanks again for sharing it with us all.

A fascinating post, Elizabeth. What an intimate glimpse into a world so far removed from our daily lives. I do rather love the blonde dress. Thanks for sharing.