Austenesque fiction and the Battle of Waterloo

We’ve been focusing on the Battle of Waterloo on the blog this month, since this month sees the centenary, and we thought we’d take a look at Austenesque stories which feature Waterloo. For those who don’t know, Austenesque fiction creates new stories for Jane Austen’s characters. The books we’ve found on Amazon all feature characters from Pride and Prejudice. Since Pride and Prejudice was first published in 1813, two years before the Battle of Waterloo, the stories are either sequels or What If? stories.  As always, if you know of any books we’ve missed, please leave details in the comments so we can update the list. Thank you! 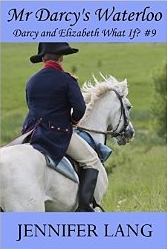 Mr Darcy’s Waterloo: Darcy and Elizabeth What If? #9

"What if Mr Darcy's first proposal had taken place in 1815? And what if Mr Darcy and Elizabeth had met again in Brussels, where they were caught up in the Battle of Waterloo? " 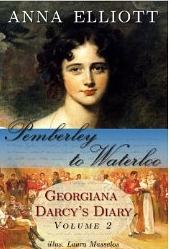 “Georgiana Darcy and Edward Fitzwilliam want only to be together. But when the former Emperor Napoleon escapes from his exile on the Isle of Elba, Britain is plunged into renewed war with France … and Edward is once more called away to fight.” 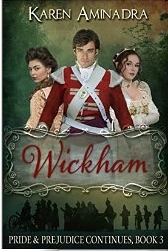 It isn’t clear if the book actually contains Waterloo, however it seems likely as, according to the blurb, “Wickham is bored with his wife, Lydia, and his lot in life. . . They both yearn for change. When Wickham leaves England to fight against Napoléon’s army in France, they both get their chance.”

"Love reigns supreme for our three brave colonels at the start of this epic tale. Colonels Fitzwilliam, Buford, and Brandon are enjoying their courtships and their early married lives  - until Napoleon escapes from exile." 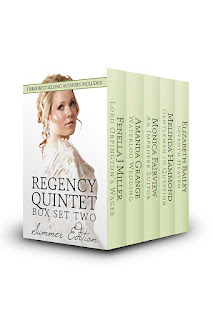 If you're in the mood for Regency romance without Jane Austen’s characters, then check out some of the new Waterloo-based Regency fiction in our posts below.

Or, if you’re looking for an antidote to Waterloo, then our 5-book set of Regency romances will entertain you with tales of a reluctant bride, an impoverished governess, an independent young lady with no need for a husband, a mysterious gentleman and a madcap adventure concerning a poet and a wealthy lady.

Whatever your choices, we wish you happy reading!
Posted by Amanda Grange at 8:27 AM

How about Jack Caldwell's "Three Colonels?"

And...have you heard? "Sun-kissed: Effusions of Summer" is available on Amazon in kindle. Paperback is coming soon! (Anthology with short stories from KaraLynn Mackrory, Karen M. Cox, J. Marie Croft, Linda Beutler, Sophia Rose, Abigail Bok, Natalie Richards, and Morgan K Wyatt.) We had a fun facebook Launch Party on Wednesday--thanks to all who stopped in to help us celebrate! Blog tour begins at Austenprose on June 15. Thanks for supporting these talented authors!
http://www.amazon.com/Sun-Kissed-Effusions-Karen-M-Cox-ebook/dp/B00YOSCQ5Q/ref=sr_1_1?s=books&ie=UTF8&qid=1433343685&sr=1-1&keywords=Sun-kissed+effusions+of+summer

My new book, The Prosecution of Mr. Darcy's Cousin, does not deal with Waterloo directly, but with the aftermath of so many years of war. It is what we now call PTSD, but in those days it was simply "melancholia." The book just released this week.

Thanks for the reminder about The Three Colonels, Jen. I've added it to the post.