Waterloo is a big deal in British history. European history, really. It marks an end and a beginning, and changed the way Europe looked for a hundred years. So when I was asked to write two novellas to commemorate the event, how could I resist? I read so many stories of bravery and heartbreak in my research for these books, I wanted to do the conflict and the people who took part in it, as much justice as I could.
Samhain asked me to write a novella, so I came up with “It Started At Waterloo.” Waterloo wasn’t all about the soldiers. Heroism off the field was provided in plenty by the surgeons, who learned some revolutionary techniques in treating seriously injured patients. 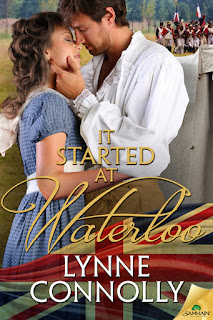 It Started At Waterloo
Does she love him enough to let him go?
After three straight days working beside surgeon Will Kennaway to treat the wounded of Waterloo, Amelia Hartwell collapses on the nearest bed to sleep. Surely she can be forgiven for not caring that the warm body sleeping next to hers is Will’s.
Amelia’s status-hungry mother, however, couldn’t be more pleased to have an excuse to get the painfully shy, socially awkward Amelia married off, albeit to a less-than-ultra-rich husband.
Will doesn’t keep his title a deep, dark secret. His little-known earldom simply affords him the financial freedom to focus solely on healing the sick. But now that he has a wife to think about—and to admire, thanks to her unstinting bravery at Waterloo—he reluctantly takes up the mantle of earl to do his duty.
Missing her meaningful work as a nurse, Amelia finds herself floundering in society’s glaring spotlight, wondering if Will regrets being forced to marry. Perhaps it might even be better to give him his freedom, even if doing so will break her heart…
Warning: Steamy, battlefield kisses under a tent canvas lead to steamy scenes in the bedroom.
Coming June 16th from bestselling and award winning historical romance author Lynne Connolly
Preorder and Read an Extract From:
Samhain
Kindle
Nook
iBooks
Kobo

And then there is Dreaming of Waterloo... 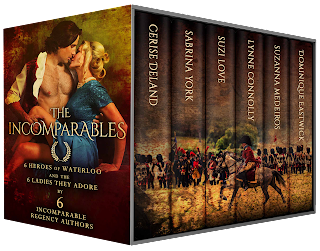 Fenella has introduced the concept of the boxed set. I didn’t take the plunge until last year, but a contemporary collection, “The Naughty List,” brought me up to date. The books sell like whoa and damn, so when I was approached to write a story with a Waterloo theme, I was more than ready. Even more so that the authors I’m working with are enthusiastic, knowledgeable and friends. Mind you, working on a box set has proved the downfall of not a few friendships, but this one cemented ours.
We all had our separate jobs, and we’ve all done them. As well as presenting a fully written and edited novella, we introduced a new London club to the scene. That was my job. A club for officers who served at Waterloo, called The Incomparables, set up in St. James’s, on the site of a club that had gone bankrupt.
Our heroes are all members, but they have very different backgrounds. I wrote about a soldier nicknamed “Lucky.”
Paul “Lucky” Sherstone was a younger son who inherited his title from his brother, but remained a soldier. After an injury early in his soldiering career, he never sustained another scratch. Men vied to be in his regiment, and Wellington threw him into every difficult encounter, turning him into a lucky mascot for the army.
Not surprisingly, Paul arrives home a complete wreck. Dashingly handsome, a popular commander, but inside he’s feeling the strain. And he arrives home to a wife he barely knows. They married before he left for the army. Now Hetty is used to running her own life, and so she doesn’t exactly wait for Paul with open arms.
I loved writing about this couple, and now I’ve started, I want to do some more! The box set isn’t out yet, but we’ve hit the Amazon.com bestseller lists already, so I’m a bit (a lot!) excited about this one.
Here’s the details. Oh yes, and the set is 99 cents or the local equivalent!
The Incomparables: 6 Heroes of Waterloo and the 6 Ladies They Adore
This limited edition box set includes 6 scorching romances that commemorate the 200th anniversary of the June 18, 1815 Battle of Waterloo.

From the Duchess of Richmond’s ball in Brussels to the Battle of Waterloo and beyond, join these six unforgettable heroes as they journey back from the physical and emotional trials of war and discover the passion that thrills the body can also heal the heart.

Preorder and read extracts from:
Amazon
Kobo
All Romance Ebooks

Our Blog: http://incomparablesclub.blogspot.com/
Our Facebook Page: https://www.facebook.com/groups/736061146513329/
Read more about this steamy collection!

Interlude with a Baron by Cerise DeLand
Emma wants only an interlude with the man she’s adored for years. But Drayton Worth has spent five years riddled with guilt for hurting her—and he’s determined to have more than a few nights in her bed.

Tarnished Honor by Sabrina York
Daniel Sinclair is a broken man with war wounds that are physical and spiritual. He’s weighed down by grief and guilt and tormented by his tarnished honor. When he meets Fia Lennox, a beautiful and brave Highland lass in dire need of his protection, he sees in her his chance for redemption…or utter damnation. Because despite his valiant attempts to resist her, he cannot.

Love After Waterloo by Suzi Love
When Lady Melton and her son join Captain Belling and the last wounded soldiers evacuating from Waterloo to London, she expects clashes with army deserters but doesn’t anticipate how falling in love with the antagonistic captain will change her life.

Dreaming of Waterloo by Lynne Connolly
They called him “Lucky,” but not all injuries are physical ones. Plagued by headaches and living nightmares, Paul, Lord Sherstone returns to London to a wife he doesn’t know and an estate he has to manage. He daren’t let her close, even though he is falling in love with her all over again.
Married and abandoned in a month, Hetty learned to manage a large estate and fend off would-be lovers, but a threat emerges much closer to home and from an unexpected place. In need of help she turns to Paul but since his return he has only shut her out. Refusing to give up on the man she fell in love with five years ago, Hetty has to persuade her husband to let her into his bed—and his heart.
The Captain’s Heart by Suzanna Medeiros
A man who is determined to fulfill his duty at the expense of his own happiness, a woman who wants only one taste of true passion, and a case of mistaken identity. Can Captain Edward Hathaway and Grace Kent overcome the guilt that continues to haunt them both and find true love?

For Love or Revenge by Dominique Eastwick
Captain Roarke Wooldridge is about to find out that sometimes love does heal all wounds.But when his need for revenge collides with desires he never believed he would feel again, will he be able to put aside the scars of Waterloo to embrace his future?
Posted by lynneconnolly at 8:00 AM