Georgette Heyer and the Battle of Waterloo

I’ve been thinking a lot about Georgette Heyer recently as I was lucky enough to attend the unveiling of her Blue Plaque at the start of the month (see an excellent account by Elizabeth Hawksley, below). The talk naturally revolved around her many Regency romances, which feature intricate plots, memorable characters, a lot of humour and meticulous historical research. Perhaps her most famous novel, at least as far as the detailed research goes, is An Infamous Army, which is set against a backdrop of the Battle of Waterloo. With the centenary of Waterloo almost upon us, I wanted to take a look at this wonderful book. 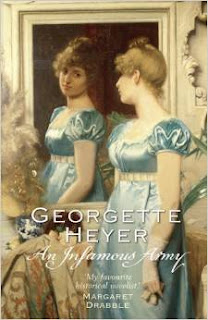 Picture the scene: we are in Brussels in the early summer of 1815. It's full of different nationalities as the allied armies gather to fight against Napoleon. English Society is well represented as many families have rented houses in order to accompany their military menfolk. Lady Barbara Childe, a young widow, is behaving outrageously – so outrageously, in fact, that her brother is in danger of taking the whole family home. But Barbara replies that, if her brother goes home, she will simply stay in Brussels alone.
This kind of spirited heroine is typical, and one of the reasons Heyer’s books remain so popular. Not for them lamentations and fainting! They are articulate, intelligent and independent women who nevertheless fall in love with their perfect man. Barbara meets her match in the Hon. Charles Audley, who falls in love with her and proposes but, although Babs accepts, she warns him she will make a shocking wife. There is a reason for Babs’s seemingly callous behaviour. She was married to a much older man and she grew to hate him, swearing that she would never again allow a man to possess her. But her love for Charles is real and it survives the terrible Battle of Waterloo, which dominates the second half of the book. 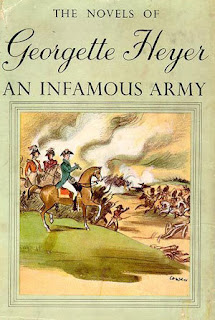 The account of the Battle of Waterloo is vivid and detailed. It's often referred to as the best depiction of the battle in fiction and it's so well researched that it was used for training purposes at Sandhurst, the military academy. It plunges us into the battle, making us feel as if we are there.  We see all the historical events in detail and experience the horror and heroism of this decisive battle. Heyer then takes us beyond the battle so that we witness the aftermath and its effect on the characters.  If you’ve been wondering what the Battle of Waterloo was about then you need look no further for a detailed and well-researched fictional account.

I've only scratched the surface of the book in this blog post. There are a number of subplots, with further romances between some of the minor characters, and the whole thing is wrapped up in Heyer's trademark Regency language. If you haven't read it, and you like a lot of history with your romance, then this is the perfect book to read as we remember the battle, which took place on 18th June, 1815.

"An Infamous Army" is a brilliant book - and a real perennial favourite of mine. So totally convincing in detail.
I am fortunate in having spent a fair amount of time in Brussels and visited Waterloo several times.
I also feel slightly proprietorial - my Gt-Gt-Grandfather was there too.

Oh, and the new-look blog seems great. Just my 2p.

I like the way on how you put up your blogs. Wonderful and awesome. Hope to read more post from you in the future. Goodluck. Happy blogging!

I am very happy to visit your site and i did like it. I was able to get some informative topics. keep it up and you can also visit my site for your reference. Thank you and have a good day.