Bejewelled Treasure at the V & A

Usually, V & A exhibition previews are vociferous affairs; smartly-dressed people from the Art World greet each other with shrieks; photographers, muscles rippling, set up their tripods; press reviewers network. It’s a place where it’s difficult to make oneself heard. 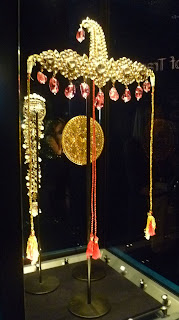 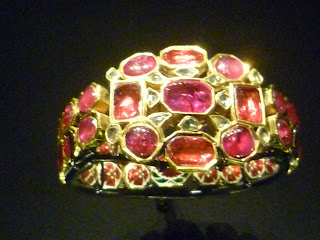 The darkened exhibition space was ablaze with the sparkle and fire from so many rubies, spinels, emeralds, pearls and diamonds that I was temporarily almost blinded. I found myself holding my breath. I certainly couldn’t speak! Around me, there was an almost stunned hush; photographers edged round quietly; conversations were muted. It was as if we were all overwhelmed by the magnificence of the jewels on display. 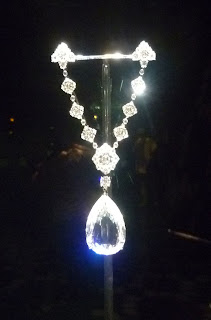 I’ve never seen such huge stones. When I eventually pulled myself together and photographed some emerald rings, I had to ask someone to put her hand on the glass beside them to demonstrate their sheer size. They were absolutely enormous. 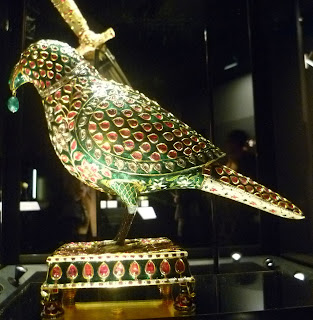 This magnificent collection, together with three superb pieces from the Royal collection, displays a hundred items ranging from an 18th century bejewelled gold tiger’s head finial from Sultan Tipu of Mysore’s throne; to the Maharaja of Nawanagar’s 20th century diamond-encrusted turban ornament; a number of jewelled daggers; and a selection of dazzling necklaces, bracelets, rings and brooches from both India and Europe. 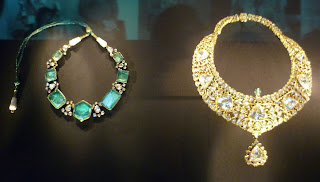 19th-20th century necklaces: Hyderabad
The exhibition triumphantly demonstrates the skill of Indian jewellery-making from the 17th century to modern times. It is divided into six sections. It opens with The Treasury, evoking the storehouses of the Mughal emperors which held precious stones of spectacular size. The Court displays objects like throne finials and jewellery belonging to famous rulers like Shah Jahan.  I found the Kundan and Enamel section particularly interesting; it explores traditional Indian jewellery techniques used in setting precious stones with a fascinating film of jewellers at work. 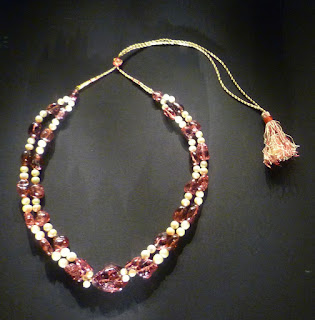 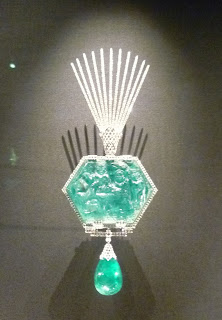 This exhibition has the Wow! factor in spades. Highly recommended for banishing those winter blues.

Thanks so much for posting this with your superb photos, Elizabeth. Don't know whether I'll make it down to the V&A before it closes, but shall certainly try. It looks and sounds amazing. I was particularly taken with the engraved emerald. Just think of the craftsmanship required, and also the punishment if the craftsman got it wrong!

Wow, Elizabeth, this looks magnificent! I love the fact that as well as showing the historical skill and workmanship the exhibition shows the influence these pieces had on the development of modern fashions in jewellery. Fascinating!

Thank you, Joanna, for your comments. I'm delighted you liked my my photos. There were several attempted shots of diamonds which I couldn't use because the light from from the diamonds was so brilliant that the photo just came out as a bright white glow!

Thank you for dropping by, Nicola. The setting of traditional Indian jewellery is truly breath-taking. The piece of jewellery is enamelled in different colours on the back (set in gold)and, at the front, the precious stones are set in a sort of gold foil (Kundan). The general effect is of the stones being wrapped in sunlight.

It looks fabulous, Elizabeth. I must make an effort to see this exhibition. Thanks for bringing it to our attention.

Thanks, Amanda. I know that many of you can't necessarily get to London to see exhibitions; but I hope I can be your London reporter. And, of course, equally, I can't always get to the wonderful and interesting places you live near!