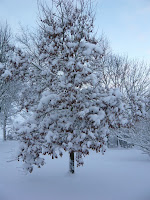 The English weather can be so drear at this season it is no wonder everyone wants something to look forward to. Something like Christmas.  However, very often the snowy weather we like to see on our Christmas cards doesn't appear until the spring and this year  the weather so far has been mild, windy and very wet, so I thought I would cheer things up with a little winter magic and some photos I took back in January. 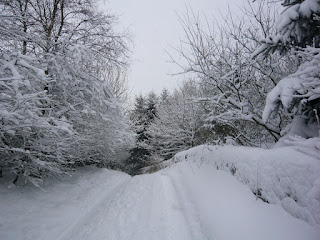 I was reminded of this winter wonderland when I was checking over the proofs of Winter Inheritance, my contribution to the Christmas edition of Regency Quintet, a compilation of stories by myself, Fenella Miller, Elizabeth Bailey Amanda Grange and Monica Fairview.

Winter Inheritance was originally published as The Highclough Lady by Robert Hale Ltd as a hardback, but I have revised it and retitled it for a new readership. Winter Inheritance is set on the Pennines, inspired very much by the area where I live 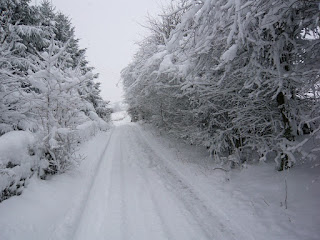 Living on a hill we have often been snowed in, and on more than one occasion I have had to make the last part of the journey to my home on foot, just as Verity does, so the description of her first approach to Highclough is drawn from my own experiences (although mostly without a handsome hero to help me on my way!)

Here's  a short extract to go with the pictures.....


Just to set the scene - Rafe Bannerman seeks out governess Verity Shore to inform her she has inherited a property in Yorkshire and he carries her off to her new home. But it is November, and the weather is turning very cold:-

Their stop at was shortened by reports of bad weather ahead of them and after a hasty lunch they set off again with the coachman casting an anxious glance at the grey clouds gathering overhead. By the time they reached the sun had disappeared behind a blanket of grey cloud that had settled over the sky and rested heavily on the surrounding hills. Verity regarded the darkening landscape with foreboding: perhaps it was the grey cloud, but the land looked so much gloomier, even the walls were darker than the whitish-grey stone she had known in Derbyshire. She watched from the shelter of the carriage while Mr Bannerman conferred with the coachman and as he climbed in beside her she gave him an anxious, questioning glance.


'We will press on.' Rafe Bannerman answered her unspoken question. 'There are no reports of snow ahead yet, but I have decided we should take the upland road rather than the valley route through Derringden. The road is steep and a little rough, but it will save us at least two hours' driving. Do not worry, Miss Shore. You must not let the prospect of a little snow daunt you. Besides, it may not come until morning.'


Verity pulled her cloak about her and glanced up at the lowering sky.


As they travelled north the weather grew steadily colder and the first flakes of snow began to fall. Verity watched with growing unease as the road wound its way through a steep-sided valley and the light faded to a gloomy dusk. Soon the coach pulled off the toll road and began a steady climb.


'We are on the direct road to Highclough.' Rafe Bannerman's voice cut through the darkness. 'There is little more than a mile to go now.'


As they left the shelter of the valley the wind began to buffet the carriage, and the snow became finer, until it was hard, icy particles that rattled against the sides of the coach with each new gust of wind. Verity huddled into her cloak, listening to the storm. She tried to peer out of the window, but could see nothing in the near darkness. The road grew steeper and the coach groaned on its back springs as the horses struggled to drag it upwards. To Verity the journey seemed interminable. She had no idea how fast they were travelling but just as she had decided that they must be climbing a mountain rather than a hill, the carriage came to a halt.


'Wait here.' Rafe Bannerman jumped down, slamming the door behind him to keep out the storm. Verity sat alone in the darkness. She could just make out the sound of voices raised against the wind, then the door jerked open and she was obliged to hold her cloak tightly against the sudden icy blast. Mr Bannerman leaned in.


'John Driver says the horses can get the coach no further. The house is less than half a mile from here. Do you think you can walk?'


She pulled one foot from the snug sheepskin and put it forward for inspection, wrinkling her nose at the well-worn leather.


'One of the advantages of a life of a governess,' she said, a laugh in her voice, 'One's footwear is always serviceable!'


Mr Bannerman helped her out of the carriage, one hand clasping the brim of his hat as he shouted over his shoulder to the coachman.


'Leave it here, no-one is likely to be coming this way tonight. Get the horses to Highclough, then have some of the lads come back with the sledge for the baggage.' He turned to Verity. 'Are you ready?' 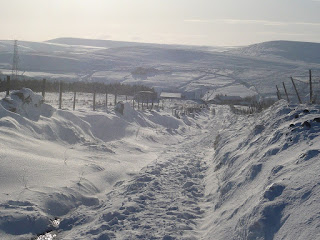 She looked down at her feet: the snow was so fine there was very little on the ground, but it was building up at the sides of the road, and she could feel the icy surface beneath her boots. They set off along a rough lane. The light was nearly gone, but she could just make out the high dry-stone walls on each side. The wind swirled about, tugging at Verity's thick cloak. The lane carried on upwards, and as they crested the highest point they were suddenly exposed to the full force of the wind, and Verity gasped as the icy rain hit her cheeks like dozens of tiny blades. She gripped her hood, pulling it tightly around her face and trudged on, her head bent into the wind. The storm howled about her and she found her feet slipping on the uneven surface. Unable to look forward, she kept her eyes on the ground, just visible in the fading light, gritting her teeth against the biting cold and the icy wind that cut through the thin kid gloves, stinging her fingers.


'Here, let me help you.' She felt a strong arm about her shoulders. 'Keep your head down. I'll guide you.'


She found herself clamped firmly against Rafe Bannerman's solid figure and he marched her steadily forward. A few minutes later, the wind dropped and Verity peeped up to see that they had turned onto a sweeping drive and had reached the shelter of a building. She was aware of a large oak door being flung open and she was bundled across the threshold into an echoing stone passage. Breathing heavily, she swayed as she found herself free of the gentleman's reassuring grip. She blinked, dazed by the quiet calm of the entrance hall.


'You are safe now, Shore.' Rafe Bannerman murmured, taking her hand to support her. 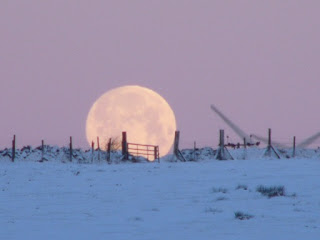 The pictures included here will give you some idea of Verity's new home, although extensive tree-planting had made the area much less bleak now. But I can imagine her getting up one morning and seeing a winter moon, just like this one, rising over the hills.


It's the sort of book to enjoy  curled up before a roaring fire! 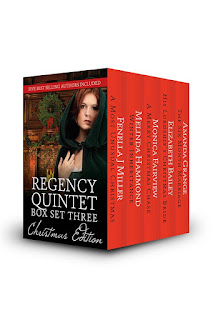 
Regency Quintet, Christmas Edition, is out now on Kindle

Posted by Melinda Hammond/Sarah Mallory at 3:30 AM

It's wonderfully atmospheric, Melinda. I know your neck of the woods well and I can confirm the accuracy of Verity's icy walk to reach her new home. Terrific!

Thank you, Elizabeth, you are always so supportive!

Beautiful photos and I loved the excerpt!

Thank you Jane - I loved writing this book because it is set so close to home!