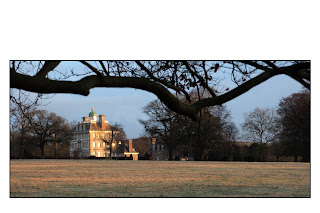 For me one of the pleasures of crisp wintry days is walking through the woods with my dog. I love the crunch of leaves underfoot and the amazing shapes of the trees, especially at this time of year when their branches are bare. Trees are special and the ancient ones especially so, yew, beech and oak.

The Celts, the Norse and the Germanic races held the oak as sacred from pre-Christian times. From the pagan image of the Green Man garlanded by oak leaves found in many parish churches to the writing of Shakespeare and Keats, the oak has rooted itself deep in the British national consciousness and its influence is represented in many ways.

The Royal Oak is the second most popular pub name in Britain, after the Red Lion. Pub names are key words and phrases that unlock doors to social and military history, folklore, national heroes and heroines, natural history, dialects, trades, industries and professions, sports and the sometimes odd British sense of humour. 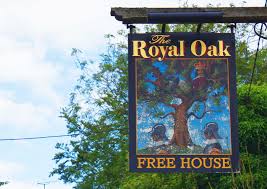 Colonel Careless hid from noon to dusk after the Battle of Worcester in 1651. After the Restoration, the 29th May, the King's birthday was declared Royal Oak Day. Ironically, it was the popular cult of the Boscobel Oak that killed the tree itself; it was dead by the end of the nineteenth century because patriotic souvenir-hunters tore off its branches, thereby hastening its demise.

The association of oak trees with national heroes can be no coincidence. Where else could Robin Hood have met his Merry Men than under the Major Oak in Sherwood Forest? The story could not have been the same, either visually or symbolically if the tree had been a silver birch. The joint symbolism of the hero and the talismanic tree is a powerful one. Here the qualities of both man and tree are entwined, representing strength, protection, durability, courage and truth.

The connection of hero and oak tree can also be traced through King Arthur, whose Round Table was said to be hewn from a massive piece of oak and whose supposed coffin at Glastonbury Abbey was made from a hollowed out oak tree. Other oak trees that have been associated with British heroes include the Elderslie Oak, which was said to have sheltered William Wallace and 300 of his men (that must have been a BIG tree!) and Owen Glendower’s Oak from which tree he witnessed the battle between King Henry IV and Henry Percy, Macbeth’s Oak at Birnam and Sir Philip Sydney’s oak tree at Penshurst. In all cases the trees are associated with or commemorate a war hero. They shed some of their strength and gravitas on the character, whose exploits mirror the timeless power of the tree.

It is significant that in most cases the oak tree in English folklore has been a symbol of loyalty rather than of  revolution, Kett’s Oak, in Norfolk, however is a symbol of rebellion. In July 1549 Robert Kett led an uprising against the Crown to demand the end to the practice of enclosure of common land. He made a rousing speech beneath the oak tree on the village green in Wymondham and led a mob in the march on Norwich, where he captured the castle. Defeated by the Earl of Warwick, Kett was condemned for treason and hanged.  His oak tree lived on, however, and became a symbol of freedom from oppression. Under the name of the Reformation Oak it became a place of regular pilgrimage for political radicals.

In 1763 Roger Fisher, published Heart of Oak, The British Bulwark, in which he argued empires rose or fell depending on their abundance or dearth of the oak. Fisher warned that the gentry were squandering the future by leaving woodlands to be destroyed by animals protected for the hunt, frittering away the birthright of future Britons so they might fund their passions for "horses and dogs, wine and women, cards and folly". "We are preying on our vitals," Fisher warned, "yet the bulk of the nation is insensible to it." It was left to the newly formed Royal Society for the Encouragement of the Arts to change attitudes. The Society offered prizes to those who planted the most trees - supremely the oak - but also the softwood conifers used for masts. As a result, acorn fever took hold. The great Dukes planted acre after acre of oak trees. Naval officers on leave, like Collingwood, went around surreptitiously scattering acorns from holes in his breeches in the parks of his unsuspecting hosts!

During Nelson’s time 2000 oaks would have been used to build a 74 gun warship.These ships were the "wooden walls" that protected Britain during the Napoleonic Wars. In Garrick’s famous poem the “hearts of oak” were both the British ships of the line and the men who sailed them. These were the stalwart defence, the protection against the ever-present threat of foreign invasion that had been a motif of British life for centuries. 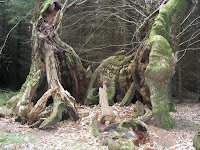 Forests such as Sherwood and Savernake make much of their famous oak trees to this day. The Duke's Vaunt in Savernake Forest was said to be the place where Jane Seymour's brother used to stand and view his estate. In the 19th century it was so vast that they were able to fit 20 boys from nearby Marlborough school within the hollow trunk!

The language of trees is in use every day. We are rooted in history, we branch out, we grow or re-grow, and we trace our family tree.  Genealogy is frequently represented by the image of the tree with its visible roots going down into the earth.  Even today the focus of many English villages is an ancient oak on a village green. In its shade people sit and talk. Notices pinned to its bark tell of fetes and fairs, marriages and funerals, items lost and found and other announcements of local importance. The oak has been and continues to be part of the fabric of English life.
Posted by Nicola Cornick at 4:18 PM

Thank you for your celebration of the English oak, Nicola. It's always been my favourite tree. According to that wonderful writer, Dorothy Hartley, an oak grown on clay soil is exceptionally hard and the root stump was once used for blacksmiths' anvils. Furthermore, in mediaeval buildings, oak wood used with the roots upward, prevented damp rising; the bark was used for tanning; the oak sawdust was used for smoking York hams and oak galls made ink.

How would Shakespeare have written his plays if there had been no oaks?

Such a multi-purpose tree, Elizabeth! Practical and beautiful too. Thank you for mentioning Dorothy Hartley. Wonderful books!

A great piece, Nicola. Although the days of Wooden ships and Iron men are past, to a former professional seaman like myself the oak will always have a special place in our hearts.

Thank you, John. I'm so pleased you enjoyed the piece. There is something very special about the oak and to mariners I imagine it must be particularly resonant. I love these echoes of our past that endure into the present.

VistaVapors is the most recommended electronic cigarettes provider on the market.