I have been to Windsor many times before, but somehow visiting the castle was something that was always left for another day. Not enough time, too late in the day or the children were too small and they would have had no patience for a lengthy visit. So it was something jotted on my ever-growing ‘bucket list’. But earlier in November I had the great pleasure of not only visiting, but also spending the day there in excellent company. Thanks to Catherine Curzon from ‘A Covent Garden Gilflurt’s Guide to Life’ and to Mr Arturo Ramirez, who is one of the fortunate people who have Windsor Castle entrusted to their care, the tour was very much like a ride on the magic carpet, as we were guided by Mr Ramirez and had the privilege of hearing countless precious snippets from the castle’s long history. 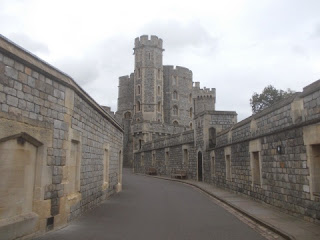 I was so taken with the wonderful experience that a few days later I visited again. I must admit that I would happily loiter for hours in a historic place examining artefacts or waiting for that elusive people-free photo. This time I did not have to wait too long. It was a weekday and at times it felt like I had the place all to myself.

Sensibly, indoor photography is not permitted, but countless images are available for research and personal use on the Royal Collection Trust website. So thankfully I will not have to rely just on my memory to catalogue all the gems I have seen. Such as the burnous currently displayed in the Grand Vestibule. It was taken from Napoleon’s fleeing coach, after the battle of Waterloo – a flamboyant garment, bright-red with golden trimmings, that amongst other things served to dispel the myth of Napoleon’s stature and prove that the cartoons of the time were largely propaganda, and he was in fact around 5’6” in height.

A great many artefacts were displayed elsewhere, in the Drawings Gallery, as part of the ‘Waterloo at Windsor’ exhibition. Watercolours showing the personages of the day; the site of battles; the crowds gathered in 1816 at the Bullocks Museum in London, where Napoleon’s captured carriage was exhibited for a while. More fascinating still, the original letter of surrender that he had sent the Prince Regent from Rochefort on the 13th of July 1815. In that brief note, Napoleon declared that he had terminated his political career and had determined to throw himself on the hospitality of the British people and claim the protection of their laws, from ‘the most powerful, most constant and the most generous’ of his enemies.

As we know, the flattery did not serve him well. By the time the letter was delivered, Napoleon was already on his way to St. Helena. Perhaps the Prince might have responded differently had the letter reached him sooner. Or perhaps not. In the decade of ‘Peterloo’ there was more than enough tension in Britain without the added powder keg of having the former emperor settled in some English country-house.

We are never to know if the letter of surrender conveyed mere flattery or genuine thought, but I still chuckle at the anecdote showing that it was not Napoleon whom the Prince Regent regarded as his very worst enemy. The story has it that, when the then King George IV was told that his worst enemy was dead at last, he had exclaimed ‘Is she, by God!’ – he was referring to his estranged wife.

I am one of those people who would find more familiar faces in the large canvas depicting Queen Caroline’s trial than in any images of modern-day parliamentary proceedings, so it was no surprise that of all the treasures displayed at Windsor Castle it was those with links to the Georgian period that had my full attention. Such as the small but deeply moving exhibit in one of the display cabinets in the Grand Vestibule: a small silver locket containing the very bullet that killed Admiral Lord Nelson and which, Mr Ramirez told us, still has remnants of golden braiding from Lord Nelson’s epaulette embedded in its surface.

Then there was the story of the Waterloo elm, a towering tree that Lord Wellington’s command post was set beneath. After the battle, the spot had become one of pilgrimage, and the tree a target for souvenir hunters, so much so that the owner of the field, heartily sick of having his crops trampled over, had decided to cut it down. As serendipity would have it, at the time the site was visited by Mr John Children, an antiquarian from the British Library, who was travelling with his daughter Anna. He persuaded the farmer to allow Anna to sketch the tree in situ, then bought the timber and brought it to Britain to entrust it to the skill of Mr Thomas Chippendale the Younger, who fashioned the Waterloo Chair. It is currently on display in the King’s Drawing Room – an exquisite piece ornamented with allegoric carvings and an inscription devised by the Earl of Mornington, the Duke of Wellington’s elder brother, whereby the Waterloo Chair was dedicated to King George IV, ‘liberator of Europe’.

So much to see, so many treasures! The Sèvres ‘Table of the Great Commanders’ (La Table des Grands Capitains) commissioned by Napoleon. His writing desk. The exquisite Rockingham Service, ‘probably the most ambitious porcelain service ever made by a British factory’ (Windsor Castle Guide p.36) commissioned by King William IV but only finished in time for Queen Victoria’s coronation. King George IV’s statue, its design largely chosen by the sitter due to a flattering well-turned calf. And in the semi-state apartments the bright and colourful Crimson Drawing Room, fully restored to its Georgian splendour. We see it now, we are told, just as King George IV would have seen it, not faded with the passage of time but in all its new and glittering brilliance – the colours vibrant and fresh, the gold leaf decorations glowing – its restoration to its original glory one of the fortunate outcomes of the devastating fire of 1992.

I could not resist the temptation of going back to Windsor for the third time in as many weeks, to see the Castle decorated for the festive season. There is a gorgeous Christmas tree in the Crimson Drawing Room now, a towering giant in St George’s Hall – very nearly as tall as the hall itself – and in the Octagon Dining Room there is a delightful homage to Queen Charlotte, King George III’s queen, who had introduced the Christmas traditions of her native country at the royal court of England. It is sometimes mistakenly believed that we owe the Christmas tree to Prince Albert, Queen Victoria’s consort. The novel custom did indeed take root throughout the land during Queen Victoria’s reign, as everyone was keen to follow in the footsteps of a dearly loved royal couple, but it was Queen Charlotte who first introduced it, by having a yew tree placed in a tub in her drawing room, which she decorated with sweetmeats flavoured with cinnamon, cloves and nutmeg. Two hundred years later, there is a large branch set in a tub in the Octagon Drawing Room, its decorations reminiscent of Queen Charlotte’s: beautiful little ornaments cleverly crafted from cinnamon sticks and dried oranges and limes.

In the nearby State Dining Room, originally intended as George IV’s private one, we are treated to an exquisite display of Regency dining splendour, of glittering epergnes and elaborate pyramids of glazed fruits and berries, looking delightfully real to the unsuspecting eye, and from a display board we learn of the plum broth served to the Royal Household for Christmas 1815, made of 90 lbs of beef, 38 lbs of veal, 78 lbs currants and as many lbs of raisins, to which spices, “cochinile”, prunes, Lisbon sugar, butter and no less than 50 eggs were added.

I am very tempted to scale down the recipe and try it out, but since the maths might be a challenge I should have a fallback option for Christmas dinner :)

Have a wonderful Christmas, however adventurous your cooking, and do visit Windsor Castle decked in its seasonal splendour if you get the chance!
(https://www.royalcollection.org.uk/event/a-regency-christmas-at-windsor-castle)

I really enjoyed this post, Joana. Thank you for introducing me to Napoleon's splendidly exotic burnous (I didn't know of its existence). It looks as though it would keep one warm in a draughty carriage but I'm worried about the extensive hem at the front which looks highly dangerous to me. It would be very easy to trip over.

And I was very interested to see the Waterloo elm, though I can't help thinking that the leaves and branches are more likely to have been shot off in the battle rather than been taken by souvenir hunters. It reminded me of the tree next to Jim Morrison's grave in the La Pere Cemetery in Paris. The first six feet or so of the trunk is absolutely covered in graffiti lamenting his death but the upper part of the tree has been left alone

Very interesting post, Joana, thank you - I enjoyed my tour by proxy!

This is fascinating, Joana, and the photos really bring it alive. It was almost as good as being there.

The burnous truly is splendidly exotic, Elizabeth, isn't it? No drab and dull blacks or greys for the great commander, but flamboyant red :) The elm did look like it had seen better days. So fortunate that it was turned into such an exquisite memento, rather than rot away or be used for fuel! I haven't seen the tree nest to Jim Morrison's grave though - something to look out for one day. Thanks for stopping by to read and leave the lovely comment, I'm so glad that you enjoyed the post!

Many thanks, Melinda, it's wonderful to know that you've enjoyed it!

I so wish I could have posted more photos, Amanda, especially of the massive and gorgeous Christmas tree in St George's Hall! An absolute giant, and such pretty decorations! Breathtaking! Wish you could have been there. Thanks for reading and commenting and I'm so glad you liked the post!

Happy Christmas everyone, have a truly magical festive season!