The java and me. 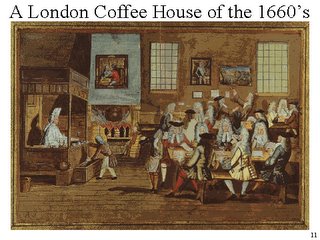 Coffee and Tea. That was the subject given to me when I was nine years old for a school project. We were to study all aspects of coffee and tea, studying the production and development of the habit. So I got to handle coffee beans and tea leaves, and discovered some of the trivia that has stood me in good stead at many pub quizzes ever since, such as the fact that tea is part of the camelia family.
Then the magic happened. I can honestly say that no love affair in my life has lasted as long as the one with Georgian England. We had a slide show as part of the project. They showed us an engraving of the inside of a Georgian coffee house, and I was in love. Completely gone.
Ever since, I’ve read and read around the period. I’ve visited many houses built then, and wished I could live there, haunted art galleries and museums. I know what they wore, how they lived, how much they earned. Only because I love the period. If I didn’t write it, I’d still research it.
Strange, then, that my interest is purely personal. I’ve never ventured into the academic world of the Georgian scholar. When I went to university, I took the Renaissance as my subject, even made a few discoveries and developed a theory or two. It just happened that way. When I went to university, Georgian wasn’t hot, it wasn’t in, and courses on the period were rare. Usually it was the Victorian ‘making of the modern world’ or the Renaissance, with its incorporation of the classical world into the new Christian thought. So I did Renaissance, since I’ve never been enamoured of the Victorian era.
The first romance I read was Fanny Burney’s “Evelina” and my first pinup hero was Lord Orville. He’s long been superseded by Dain, Jervaulx, Alverstoke and Darcy, but he’s never lost his place in my heart. First loves always last!
The robustness, honesty and colour of the period enchanted me. The labyrinthine politics were a bit trickier, but the personalities of the period, Pitt, Fox, Wilkes and the rest brought the dry Parliamentary proceedings and the laws of the time to life. Similarly, the underworld, full of colourful characters, was irresistible. The fashions were outlandish and gorgeous, and this was the last time a man felt free to peacock alongside the women, if he wanted to. It takes a real man to wear pink!
I know I could move into Georgian England and live there like I was born there, but would I want to? How can I put this?
No.
A world without instant music, the Internet and the computer? Unthinkable. A world where I was banned from doing so many things simply because I’m female? Infuriating.
I’ll stay where I am, thank you very much. But give me the chance to pay a visit to London in the 1750’s and I’d be there like a shot.

I'd be there with you! I too find the period absolutely fascinating. But I'd also need to travel back to the 21st century. Something about needing a hot shower and a bowl of buttered popcorn *g*. And being able to keep cats and talk to them without fear of being branded a witch!!

That was an interesting post. But which of you wrote it?