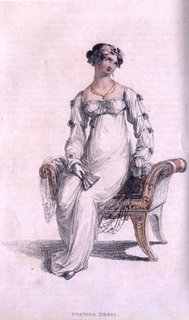 The wonderful summer weather has started me thinking about fans – at the recent RNA Conference I noticed that Louise Allen had taken advice from her Regency heroines and provided herself with a pretty fan, and used it to great effect as the temperature started climbing.

Throughout our period, folding fans were the most popular, although brisé fans (consisting only of sticks that get wider from the rivet to the top) made a return to fashion after 1800. Fan sticks were made of wood, mother of pearl, tortoiseshell or ivory, the lower ends were often intricately carved and even studded with gems. The leaves of the folding fans were of paper, parchment or "swan skin" (actually a very fine leather from lambs or kids) and occasionally silk. Fan leaves made of fabric came into fashion at the end of the 18th century. Fans were painted with scenes from classical myths, landscapes etc and after about 1780, when printed leaves became available, current events such as balloon ascensions became popular. Inexpensive fans with plain wooden sticks and printed paper leaves could be bought or given away as souvenirs – the example shown below is the "New Caricature Dance Fan of 1794" from Bath Museum of Costume and depicts popular dance steps and music of the time. 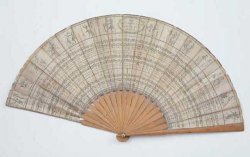 During Georgian and Regency times, fans had a whole language of their own, and the art of "fluttering" could take months to acquire – one wonders how many ladies sent out the wrong signals? Fans could be used to hide a yawn or a smile as well as for flirting outrageously.

Although electric room fans are effective for large rooms and offices, I think we should start a fan revival for personal use – these beautiful fans are so much more attractive than the modern battery-operated versions, and they don't buzz at you!

As a PS to this, I noticed several members of the audience at the Proms last night were using fans

What's more, you could furl them and rap a gentleman's knuckles if he offered to loosen your clothing to counteract the exessive heat!

Did you know there is a Fan Museum in Greenwich?
I was going to visit it last time I was down there, but ran out of time as usual.

There is indeed a fan museum! I love that place!