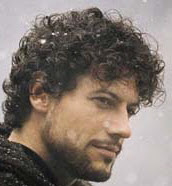 I went to see Fantastic Four at the weekend, and it occurred to me that Iouan Gruffudd would make a very good Colonel Brandon. He's about the right age now and I think he would be convincing both as a military man, and as a man who was deeply in love with Marianne. And whilst it would be understandable for her to dismiss him in the beginning, it would be easy to imagine her falling in love with him in the end.

And then I started thinking about Austen's other heroes. Who would you cast as a new Darcy? My choice would be Richard Armitage. Tall, dark and handsome, and with a wide acting range that could encompass Darcy's arrogance and his vulnerability.

What do you think? Who would you cast as Brandon and Darcy, if any new films were made?
Posted by Historical Romance Author at 9:35 AM

I'd cast Richard Armitage as all of them. But then I simply adore him and am hugely biased.

He would have made a fantastic Wentworth.....

OK, for Brandon I'd have Daniel Craig and for Darcy I'd have . . . mmm, let me think. Well, I know he won't be most people's Darcy but I could bring myself to watch Orlando Bloom :-)

Agree, Richard Armitage would have been an OUTSTANDING Wentworth, but I'm just as glad he wasn't cast in the recent movie as it wasn't that great. He wouldn't be a bad Brandon, either, OR Mr. Knightley--he can turn on the charm, as he did in the Vicar of Dibley--he was very much a regular guy with a lovely personality, no brooding at all.