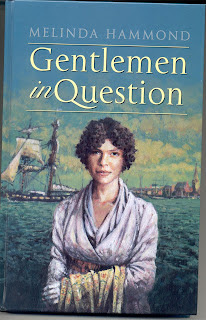 Gentlemen in Question is now out in a large print edition!

In the closing months of 1792, the terror of the French Revolution forces Camille, the young Comte du Vivière , to flee his homeland and seek refuge with his relatives in England. For Madeleine, the arrival of her handsome French cousin marks a change in her so far uneventful existence and she soon finds herself caught up in a dangerous web of intrigue that also entangles Camille. But is he victim of villain?

The cover depicts Madeleine at Rye, where she has gone with her parents to meet ner French cousin. What do you think of the picture? I like to think that the dark and stormy sea in the background depicts the tempestuous times that lie ahead for Madeleine and her family.

Melinda Hammond
Posted by Historical Romance Author at 8:10 AM