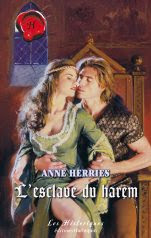 I just popped in to tell you that my new Regency trilogy starts this month. It begins with Marianne & The Marquis and is followed in October by Married By Christmas and ends in December with Marrying Captain Jack. It is the story of three sisters in search of husbands and a lot of fun. The Hellfire series was darker, this one is lighter and romantic. I also wanted to tell you that Captive of the Harem comes out in France this week and a kind peson sent me the cover, which I am going to publish here today. As the book also comes out as a double here in October it will be interesting to compare the covers. I am very thrilled with this news as Captive is already my best selling book with HMB and it will do even better now.

I went to Richmond this week to have lunch with my editors and we talked about new books. Forbidden Lady, which came out in America this year should be published as the first of a trilogy next year here. It is actually part of a Dynasty series which will with good luck and a fair wind, as they say in all the best pirate films, go on for several further series. So I am very busy but I do hope to do some more of the Journal of a Regency Lady soon.

Everyone is talking about Georgette Heyer lately. I adore all her books but my favourite is Arabella closely followed by Devil's Cub.

Best wishes to you all, Anne Herries
Posted by Historical Romance Author at 4:00 PM