Janet Mullany's new Regency, Rules of Gentility, is something different. Here Janet talks about her writing, her love of the Regency period, and of course her new book.

Thanks for having me as your guest here today and allowing me to talk about myself--oh, and the book. 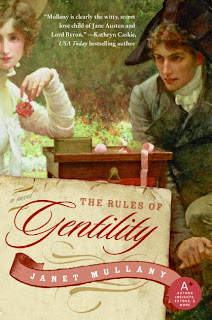 Fashion and charitable works are all very well--but what's a Regency girl got to do to get married around here?

Regency heiress Philomena Wellesley-Clegg is not short of offers. Unfortunately those doing the offering--two lords, a viscount and a mad poet--all fall short of her expectations. But she's about to meet Mr Inigo Linsley. Unshaven, wickedly handsome and hiding a scandalous secret, he simply isn't Philomena's type--so why can't she stop thinking about how good he looks in his breeches?
Pride and Prejudice meets Sex and The City in this ravishing Regency romp about boys, bonnets and breaking the rules.


I started writing The Rules as a joke--light relief from the angsty ms. (as yet unsold) I'd just finished where everyone gave everyone else a hard time, the heroine laughed at the hero in bed, and the weather was atrocious. First I started imitating Bridget Jones' Diary (the US tagline was Bridget Jones' Diary meets Pride & Prejudice) but I couldn't find an equivalent to a daily weigh-in, cigarette, and calorie count. So I abandoned that format in about five minutes.

Then I thought I'd write a parody of trad Regencies (a la Signet Regencies)--although my first book, Dedication (2005), published by that line, had two (yes, two, count 'em) bondage scenes and some fairly grown-up sex. And I didn't feel like cruising the used bookstores for ancient Signets, so I decided to write both a parody and a get-back-to basics Regency: I chose a heroine who has some smarts but isn't particularly intelligent or gifted and frustrated because of it; her goal is to get married; and she's smart enough to trust her instincts in choosing a husband. She has some fairly silly hobbies (fashion and fashionably good works). And the hero is basically a nice guy, the youngest son of a normally dysfunctional family, who's done some stupid things but has grown up enough to get beyond them.

I should add that I have a very low tolerance for tortured heroes (and heroines). There comes a point, usually very early on, where I want to smack them and shout, Oh, get over yourself already. Grow up!

Basically it was a lot of fun to write. I threw in as many bad jokes as I could, because my experience of most romantic comedies is that they're not that funny, and I became very fond of Philomena, who is innocent but not stupid, and certainly very observant. Someone told me (I think it was my daughter) that I have the humor level of a twelve-year-old boy, something I'm quite proud of. 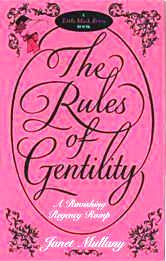 Being published by Little Black Dress is amazing. I'm their first historical writer, and my editor told me she loved my voice (writers take note: it's how you write as much as what you write). My first thought, very early on, was that I should sell it to a chicklit line in the US. It was a hard sell in the US--for one thing, it was written in alternate first person between Philomena and Inigo, and in present tense, which is unusual in US romance. HarperCollins published it as a historical in their Avon A+ line (2007), and told me it wasn't a romance (and here I was thinking I'd finally cracked the romance code!). They gave me a superb cover--as did LBD.

One warning--the LBD edition does not carry the Top 10 Things No One Would Ever Say in a Regency Romance that was part of my afterword in the HarperCollins edition. I've published them on my website, www. janetmullany.com

In March 2009 a sort-of sequel will be published by LBD--A Most Lamentable Comedy. It's set six years later and most of the characters are still around, but the heroine is Caroline, who you meet early on in the Rules. I thought it might be fun to write about a bad girl, having written about a good girl in the Rules.

Thanks, Janet, the book looks terrific, and hooray for Little Black Dress for doing something different with the Regency.
Posted by Historical Romance Author at 10:11 AM

Congratulations on your UK release, Janet!! I loved The Rules! Good luck with your new audience, I'm sure they'll love it.

UK readers, you are going to LOVE Rules of Gentility! It is so funny and smart and the best kind of parody because it shows a fondness for the time period as well as poking fun at it. I loved this book and, no, Janet did not put me up to saying this!

H1 Christie! Christie saw the book in its first manifestation when we were critique partners.

Hi Diane--and Diane's talking about her book and giving away a copy of it at Risky Regencies today, so come on over and enter the contes.

Ahem, that's not the US spelling of contest. I forgot the t. Where is my tea anyway? Off to find it...

Your new book sounds like another winner, Janet. Congratulations. I love your spin on the sometimes stuffy Regencies!

I love a book that makes me laugh. So off to Border's I go. With my dh unfortunately opening the third quarter VanGuard account of our retirement, believe me, I NEED a laugh.

Good luck in the UK, Janet. I'm sure they are in for a big treat!

That's what delightful books like Janet's Rules of Gentility are for; to ignore that awful word.

Janet, congrats on the sequel! :)

Hi Diane, Debra, and Gillian... but where are the English people?

Janet,
Was this book published twice? First in h/b by Harper and then p/b by LBD?
I write the traditional regencies this is a parody of! -:)
I'm always pleased when any regencies are published over here. Only two small independent publishers are releasing them at the moment.
Congratulations!
Fenella

Janet, I met you at the Romance Writers of America conference in San Francisco this summer. I'm the woman who demanded to know when the sequel to Rules is coming out. Seriously, I adored The Rules of Gentility so much I read it twice. I am now plotting to bribe, threaten, or beg one of my colleagues in Bristol into buying the sequel for me as soon as it hits the shelf. :-)

Fenella, the book was published originally by HarperCollins as a trade paperback and then LBD bought it. I have a contract for three more from LBD.

Thanks for dropping by, Vicky and M the Canadian. Hint, they're very small books, could fit easily into a traveler's pocket and would hardly add to the baggage allowance at all...

this looks interesting, I'll look out for it in waterstone's

It sounds like a wonderful journey to bring The Rules of Gentility to life. Congratulations on the success both here in the US and in the UK and continued good luck with Lamentable. I am certainly going to look up Rules and will keep my eyes open for Lamentable. Perhaps you are merely broadening the parameters for what a romance truly is - never bow to the naysayers.

I like the US cover, the UK cover might have to grow on me. but it's pink and that's good!

Sounds as if the book is a lot of fun, Janet. I think you can always tell when the writer has enjoyed herself in the writing. Will look out for this one.